Durkin’s Nest a Stellar Showcase for Coon and Law

After persuading his American wife Allison (Carrie Coon) to uproot their family and move with him back to his hometown of London, fast-talking financial entrepreneur Rory (Jude Law) is certain the world is about to become their personal oyster. He rents a large estate in the country, puts both their children in expensive private schools and buys Allison a horse while promising to build a massive stable so she can resume her business as a trainer.

But all-too-quickly she determines something is amiss. Rory has always been one to stretch the truth, and it’s increasingly clear his words aren’t matching his actions, and as such the family’s bank account is suffering. Stables aren’t being built. Bills aren’t getting paid. Allison is starting to wonder how much more of this she can take, and the angrier and more frustrated with her husband she gets, the more she starts to wonder if remaining married to him is worth the psychological damage it’s doing to both her and their children.

His first film behind the camera since 2011’s masterful Martha Marcy May Marlene, writer/director Sean Durkin’s The Nest is a stinging marital drama that’s nothing short of superb. Featuring a blistering performance from Coon that’s one of the best of her young career and another from two-time Academy Award nominee Law that’s equally exceptional, this movie grabbed ahold of my heart in a vice-like grip and subsequently refused to let go.

Set in the mid-1980s just as financial deregulation was taking hold in both the United States and in Great Britain, a great deal of the story is seen primarily through Allison’s eyes. She is instantly wary when Rory declares he feels their family should move to London. Yet a wife’s duty is to follow her husband’s lead or, at least, that’s what she’s been raised to believe. So even though all the signs are ominous, Allison goes along with Rory’s plan, hoping her fears will be groundless and all will be as wonderful as he keeps insisting it is going to be.

There is a scene at a fancy dinner party at the wealthy home of Rory’s employer Arthur Davis (Michael Culkin). During an extraordinary static shot of Allison’s face as she silently listens to one of her husband’s seemingly endless monologues, Durkin’s camera slowly zooms in on Coon’s face as her character begins to understand how big a charlatan Rory is and how enormous the trouble her family is now likely in due to their moving to London. With zero dialogue and in total silence, the actress delivers a scorching emotional diatribe utilizing only her eyes and the delicate contours of her face, making the catastrophic human tsunami to come all the more inevitable because of the truths revealed in this pivotal moment.

From there it becomes an explosive balancing act between fact and fiction, between shady subterfuge and brutal honesty. For reasons best discovered watching the movie and not explained here, Rory is an ephemeral enigma so used to living a glorious lie he has trouble recognizing the bitter truth even when it screams right in his face. Allison is essentially her husband’s exact opposite. She becomes obsessed with the truth. It overwhelms her. It smothers every move she makes. It consumes every piece of her being to the point where one additional tragedy or a single extra indignity could push her over the edge into a complete mental meltdown from which she may never recover.

Much like he did in Martha Marcy May Marlene, Durkin fearlessly refuses to cut any corners. He allows every bitter and disturbing one of his story’s more insidiously disquieting recesses to stare the viewer straight in the eye whether they’re comfortable having it do so or not. In the process, he has crafted a prickly melodrama that balances its masculine and feminine personalities with nimble precision. It flips the script and kept me continually on my toes, shattering expectation as it obliterates genre convention even as it follows a straightforward template the likes of which Bette Davis, Paul Henreid and Claude Rains would have been more than at home in back during the 1940s.

It’s stunningly shot by Mátyás Erdély (Sunset) and edited with pinpoint exactitude by Matthew Hannam (Wildlife), while James Price’s production design and Matthew Price’s (Fighting with My Family) costumes are equally impressive in their own effortlessly subtle way. But it is Coon and Law who make this film essential. Their performances are mesmerizing in their intensely focused exactitude, each bringing their respective characters to life with such meticulous authority I was in constant awe watching them work. Durkin’s return is cause for celebration, and for me The Nest is an unforgettable triumph that packed a major wallop. 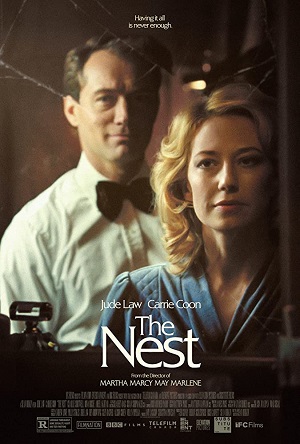