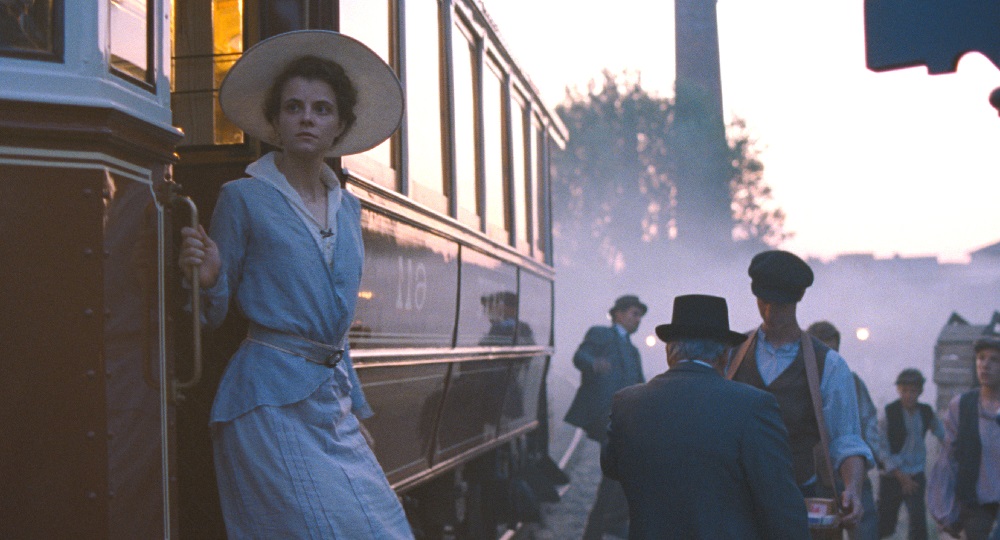 With his second feature-length motion picture Sunset, László Nemes cements himself as a rising virtuoso filmmaker whose cinematic talents are nothing less than extraordinary. Already an Academy Award-winner for his 2015 debut Son of Saul, the director’s latest is a stunning miracle of historical fiction that blew me away. It is the personal story of a young woman deciphering, not only the mystery of her past, but also discovering the hidden horrors that will lead to European collapse and worldwide tragedy. This is an immersive drama that held me spellbound for all 142-minutes of is sprawling, singularly focused narrative, and the only thing I wanted to do when the story came to an end was to rewind back to the beginning and watch the whole thing for a second time right then and there.

It is 1913. Irisz Leiter (Juli Jakab) has arrived in the Hungarian capital of Budapest hoping to get a position as a milliner and designer at the world-renowned hat company her parents founded three decades prior. But company manager Oszkár Brill (Vlad Ivanov) is hesitant to hire her. He knows why she was sent away to study when she was just a child, her return reminding everyone of the tragic fire that took the lives of her parents when she was two-years-old. But his reasons for not wanting her associated with the company at the time of its 30th anniversary are even more mysterious than Irisz could imagine they would be, and even though everyone she encounters keeps telling her to leave the city, the young woman resolutely decides to stay in Budapest until she knows exactly why so many what her to go away.

Initially it appears as if Sunset is going to be a period mystery with terrific hats following a woman learning about the death of her parents while also discovering the truth about the brother she never knew existed. Very quickly it becomes apparent that Nemes has more on his mind than that. Through Irisz’s eyes we see the seeds being planted that will horrifyingly blossom into the carnage of WWI. We see how industrialization and modernization clash with the socially and religiously-conservative ideologies that also end up in direct opposition of the growing resentment starting to brew between the few wealthy elites and the common worker who has seen their quality of life diminish over the years. Not only does Irisz learn about herself and her family but she also discovers a catastrophic break in the formerly indissoluble status quo, death and madness walking hand-in-hand in a blind march towards calamity the likes of which no one could have prepared for let alone comprehended back when the hat shop first opened it doors.

That’s a lot of stuff to be examining, and yet Nemes manages to do it with breathless specificity. Irisz is an active observer, clueless participant and stubborn instigator in all that ends up happening as it pertains to the hat company her parents founded as well as to the nation of Hungary. She attempts to save others from damnation one moment only to later on accept that they will be the lifeless collateral damage left behind when revolution and chaos sweep through and stain the pristine halls of the bourgeoisie with the blood of prince and pauper alike. It’s magnetic stuff, the breadth of the historical windstorm that’s on the cusp of becoming an earthshattering hurricane a constant threat that follows Irisz wherever it is he she chooses to go next.

This purely observational approach does take some getting used to. As someone cruelly points out a bit before the film’s explosively devastating climax, Irisz looks the part of the heroine and spends much of her time ascertaining answers to a variety of different questions but that does not mean she actually does anything with any of this information or takes an active role in what could potentially transpire. But her reasons for acting the way she does has far more power change the course of history than is initially discernable, and her apparent passivity should not be confused with indifference. Irisz coldly and clearly takes her time figuring out what is happening, her formerly black and white view of the world and its travails bursting into shades of grey she quickly attempts to learn the best ways to traverse within no matter what the repercussions of doing so might prove to be.

There is a set piece set inside the sprawling mansion of a distraught and emotionally demoralized countess (Julia Jakubowska) that’s nothing short of glorious. A sedate moonlit garden party and concert erupts into catastrophic violence, a determined mob laying waste to man, woman and child alike with cutthroat resolve. Cinematographer Mátyás Erdély (The Quiet Ones) captures it all in series of elongated, fluidly magnetic takes that are deftly compiled into a seamless concerto of carnage by editor Matthieu Taponier (Son of Saul). It is here Irisz will begin to understand the full extent of what is going on. It is here she will see exactly what her shadowy brother is capable of.

But this moment will also lead to even more incredible revelations involving, not just Oszkár Brill and the running of the hat shop that bears the name of Irisz’s parents, but also of the ruling monarchs governing Hungary and the secretive deal they’ve made with him that involves the prettiest and most poised of business’ milliners. These disclosures will play a gigantic part in the story’s climax, the decisions Irisz eventually makes in many ways mirroring those by various European governments that will plunge the entire world into war in no time whatsoever.

Jakab is sensational, and as she’s in practically every scene of the film, Erdély’s camera following her wherever she goes as if it were perched on top of the actress’ shoulder, this is a very good thing indeed. Her determined introspective performance is full of layers, and as she begins to peel each of them away subtle, heartrending truths about this world and her place within it are laid bear with raw, naked intensity. Ivanov is also excellent as the secretively deceitful Brill, while Evelin Dobos makes an indelible impression as the hat store’s manager who cannot hide her dissatisfaction with her boss when he unexpectedly decides to allows Irisz the opportunity to become a part of their staff.

I couldn’t get enough of this movie. I was mesmerized by everything Nemes was doing, was infatuated with the way he chose to dissect this story. Irisz Leiter is a fascinatingly complex character who eschews simplistic categorization and rarely follows anything close to resembling a conventional path as she pieces together this violent socio-political puzzle. This is a daring, thought-provoking motion picture that overflows in disturbing resonance, Nemes drawing parallels between the personal saga of a woman looking for answers to questions she didn’t even initially know, the birth of WWI and the groundwork for the fascist resurgence we’re seeing in the United States and several European countries right this very second here in the 21st century over a hundred years after this story is set. Make no mistake, Sunset is magnificent. See it at once. 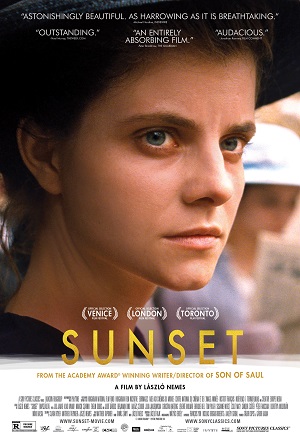