There’s something in the sky. It’s spooking the horses at the ranch owned by siblings OJ (Daniel Kaluuya) and Emerald Haywood (Keke Palmer). After the mysterious death of their Hollywood legend father, Otis Haywood Sr. (Keith David), they’ve been trying to carry on his legacy of training the best animals in the business — to mixed results. Just to keep the lights on, OJ has even been forced to sell some of their prized stock to theme park and petting zoo proprietor Ricky “Jupe” Park (Steven Yeun), a former child star whose career ended in bloody calamity in front of a live studio audience.

But there is still something in the sky. OJ is certain there’s an object hiding in the clouds, and Emerald sees a business opportunity if they can prove their suspicions are true. With the aid of bored electronics store technician Angel Torres (Brandon Perea) and the visual ingenuity of famed cinematographer Antlers Holst (Michael Wincott), the Haywoods will get to the bottom of this bizarre mystery. They believe they’ll do whatever it takes to get documentary proof of their invisible aerial visitor, not realizing the price of the truth may be their lives.

Jordan Peele’s Nope has a lot going on. At heart, the film is really nothing more than a freaky little what-if thriller about a small group of outsiders banding together to face down an unstoppable opponent. While there are thematic elements that attempt to lay bare Hollywood’s sordid history involving race, gender, age discrimination, and the industry treatment of child actors, those pieces never entirely fit together. But Peele’s grasp on the material remains electrifying throughout, and even if his latest doesn’t have the staying power of either Get Out or Us, when taken on its own modest terms this bit of throwback Jack Arnold meets Steven Spielberg meets Larry Cohen terror remains a lot of fun.

There are some seriously great moments. The opening prologue where we see what happens to the elder Haywood is chilling in its minimalism, the way Peele focuses on father and son throughout a great hook that immediately had me excited to discover what was going to happen next. It’s immediately followed by the humorously awkward introduction of Emerald. The young woman arrives late for an important shoot involving one of their horses only to blow everyone away with her monologue right before allowing things to fall disastrously apart due to her flippant indifference.

Another great scene is a flashback to Jupe’s popular 1990s sitcom. This initially feels slightly out of place as it shows a gruesome tragedy seemingly disconnected from the larger mystery hiding in the skies above his Western-themed amusement park and the Haywoods’ sprawling ranch. But the broader implications of this sojourn into the former actor’s past link to the primary plot beautifully. Jupe’s backstory adds a layer of heartbreak that spurs a desire for payback, and achieving that payback will require almost as much selfish foolishness as it does selfless heroism.

The reveal as to what is actually going on elicited a few unexpected giggles from the packed promo audience I saw the film with. Some of those laughing were doing so to ease the aura of anxiety and dread Peele was working to create. Yet it was equally clear others were laughing in disbelief at where the filmmaker had taken things. Even if it’s purposefully telegraphed early on, it is a silly reveal, and while my retro horror-loving heart loved it, I could see how some may have been expecting something more substantial from Peele and thus felt a minor tinge of disappointment.

I want to say more, but even hinting at what happens during the last act would be inexcusably evil, as audiences deserve to find out on their own. What I can say is that Kaluuya is as wonderful as ever, Wincott is a grizzled treasure who I wish had a bigger role, Perea is a goofily jittery revelation, and Yeun brings to his few scenes a soulful melancholia that caught me by surprise. The film is also magnificently shot by the great Hoyte Van Hoytema (Dunkirk), the veteran cinematographer an ace in the hole who helps give Peele’s shocker its haunting, painterly appeal.

Yet it is Palmer who makes the lasting impression. After breaking out in 2006’s Akeelah and the Bee and subsequently making a name for herself as she grew up on camera for all the world to see, there are times when it seems Peele designed his otherworldly shocker for her and her alone. Emerald has all the best lines. She has almost all the most memorable moments. The character is front and center in several unexpected ways, and Palmer grooves along with the growing craziness to her own idiosyncratic beat. I couldn’t take my eyes off of her.

The more I think on this one the more I smile. It doesn’t have the complexity or resonance of Peele’s first two efforts, and because of that, I doubt the film will achieve the same level of acclaim or sell as many tickets. But the darn thing is just so enjoyable. Its final 30 minutes are a masterclass of energetically kinetic moxie reminiscent of Spielberg’s Jaws, Tobe Hooper’s Lifeforce, or John Carpenter’s In the Mouth of Madness.

If Nope doesn’t have the disquieting staying power of Get Out and Us, I truly couldn’t care less. Peele is riffing in imaginative ways that kept me engaged and eager to see what all the fuss was about. His latest is monstrously entertaining, and I cannot wait to see it again. 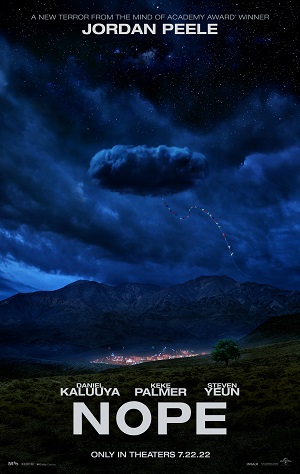