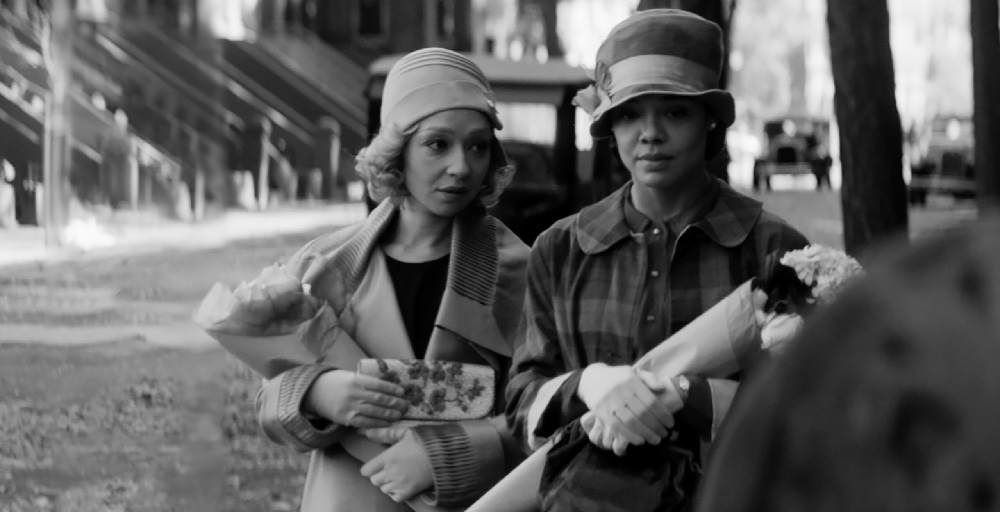 I’m not sure that Passing, set in 1929, could feel any more of the moment if writer-director Rebecca Hall had gone out of her way to make it so. Adapted from author Nella Larsen’s classic novel written almost a century ago, this film is a profound, devastatingly precise examination of race, gender, self-acceptance, and sexual longing that grabbed my heart in its vice-like grip and then refused to let go. It is nothing short of masterful.

Was it chance? Or fate? Either way, former childhood best friends Irene (Tessa Thompson) and Clare (Ruth Negga) have been reunited. Both women can “pass” as white, but Irene lives in Harlem and has married Brian Redfield (Andre Holland), while Clare is the wife of the wealthy and openly — almost proudly — racist John Bellew (Alexander Skarsgård).

Irene isn’t sure what to make of this. She is fascinated and appalled by Clare’s decisions. Yet, is she also envious of her old friend? It’s hard to tell, especially as Clare appears somewhat covetous of Irene and the life she is living. The simplicity of their high school days are long gone, and the unfathomable complexity of who they are now as young women, happy wives and supposedly contented mothers is nothing more than an ephemeral façade neither can make heads or tails out of.

Hall’s feature-length debut is an extraordinary bit of storytelling that only grows in spellbinding consequence as events move toward their shatteringly honest conclusion. Watching how Clare slowly and subtly insinuates herself inside Irene’s home, I was stunned to realize things were never going how I suspected they would. Each woman has very personal reasons for going through life as they have, and both balance truth with lies in a manner such that it becomes increasingly difficult to differentiate between the two as their reconstituted friendship begins to blossom into its former fruitful glory.

I did have some early reservations. Hall’s choice to have cinematographer Edu Grau (The Way Back) shoot in black-and-white at first feels like a pretentious trick. But I couldn’t have been more wrong about that. There are multiple layers to the visual stylings, ones that substantially augment the emotional components as Irene and Clare’s relationship evolves. There’s more happening between the shadows than initially meets the eye, and Hall magnificently utilizes these shades of gray in a variety of captivating ways.

What is slightly unexpected is how ineffective Skarsgård is. For whatever reason, I didn’t buy him as John. His coldly calculated racist villainy never felt entirely genuine. It was almost as if the actor couldn’t bring himself to venture into those dark, dangerous interiors that could allow his character to take insidious residence underneath the viewer’s skin. It can’t help but strike me as a missed opportunity.

But the film doesn’t rise or fall on his performance. Instead, it is beholden to Negga and Thompson, and both rise to the occasion. The former has the showier role, but that does not make what she is doing any less monumental. Negga discovers unexplored recesses inside of Clare that are heartbreaking in their stark, unvarnished magnitude. She’s spectacular, maybe even better than she was in 2016’s Loving — which is saying something because that performance earned her an Academy Award nomination for Best Actress.

Believe it or not, Thompson is even better. She’s been stellar for quite some time now, including in films as different from one another as Creed, Annihilation, Dear White People, Sylvie’s Love and even Thor: Ragnarok. But Thompson is flat-out mesmerizing as Irene. From her subtle physicality to her hushed vocal inflections, to the way she carries herself from one end of the frame to the other while wearing Marci Rodgers’s (BlacKkKlansman) immaculately crafted costumes, there’s nothing the actor does that didn’t floor me. This is one of the year’s best performances.

Having never read Larsen’s novel (which I now fully intend to do), it does not surprise me to learn that Hall has stripped things down to their basic components, centering the story on Irene and Clare and excising almost everything else. That feels right. Their relationship is the core element that kept me glued to my seat. Passing lives in the brief looks that one woman wistfully gives to the other, and the hidden message behind each of these momentary glances is guaranteed to linger in my memory for a long time to come. 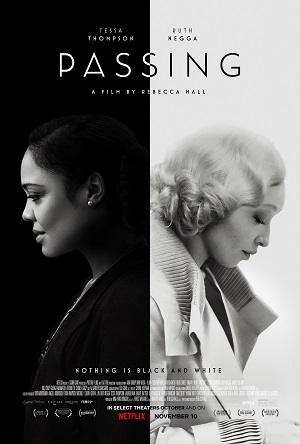