Pearl is a gift. A prequel to Ti West’s 1970s-style, grindhouse barnburner X released back in March, this new film reunites the director with star Mia Goth, the pair collaborating to flesh out the backstory of that enterprise’s elderly murderess.

Pearl (Goth) lives on a secluded Texas farm with her German immigrant mother (Tandi Wright) and sickly father (Matthew Sunderland). It is 1918. The Great War is nearing its end, and the Spanish flu is still a lethal danger throughout the United States. Pearl’s dad was an early victim of the pandemic, and now he’s strapped into a wheelchair, unable to move, speak, or take care of himself whatsoever. Additionally, her husband Howard (Alistair Sewell) is off fighting in Europe, his whereabouts and whether or not he’s even still alive dispiriting unknowns.

West and Goth do not try to hide who Pearl is going to become. The gorgeously cinematic opening credits do a grand job of colorfully showcasing the young woman’s budding psychopathic tendencies (and also remind everyone about the giant alligator residing in the farm’s backyard pond). Pearl’s anger regarding her situation and who she passionately believes she should be is immediately palpable, but there’s also a sly timidity to her personality that’s somewhat surprising.

It’s the slow and methodical erasure of that kittenish timorousness that West and Goth seem to have the most interest in exploring. Pearl knows there’s something off about herself; she even admits it out loud before the bodies start hitting the floor and dismembered limbs get fed to that ravenous alligator. Pearl wants to be good, or at least that’s what she tells herself. But being seemingly locked into a life she does not want — and facing massive obstacles put in place by those she thinks should love her the most — is incrementally exhausting, which almost makes her homicidal anger uncomfortably understandable.

But this isn’t some claustrophobic chamber piece taking place entirely at the family’s farm. Pearl’s world may be small, but West, cinematographer Eliot Rockett, production designer Tom Hammock, and costume designer Malgosia Turzanska — all X veterans — craft a vibrant, larger-than-life dreamscape that’s like something from Hollywood’s golden age. They present the film as if it were a blood-splattered Wizard of Oz, only instead of a yellow brick road, Pearl bikes back and forth along a golden-brown dirt boulevard that leads straight to town.

It gives the picture a psychedelic texture that’s lightyears from the grindhouse, Tobe Hooper-influenced aesthetic of the previous entry in the series. It’s as if Stanley Donen or Vincente Minnelli rose from the grave and decided to make a Technicolor splatter film instead of a high-energy musical. There is a dazzling texture to this world that feels organically lived-in and boisterously gaudy in equal measure, and it suits Pearl’s fracturing sense of reality nicely.

The 1918 setting allows West to subtly comment on current events, but never in ways that are so obtuse that they’ll fly over a viewer’s head. There are also opportunities for the director to make clever audio and visual connections to the sex-positive X, many of them eliciting ample, well-deserved chuckles of recognition from the audience. I also loved a pair of wonderful supporting performances from David Corenswet and Emma Jenkins-Purro, the latter sharing a scene with Goth right at the end of the film that’s unbelievably terrific.

As for Goth, as mesmerizing as she was in X in her dual roles as wannabe porn starlet Maxine Minx and an elderly Pearl, this is next-level stuff from the actor. I couldn’t take my eyes off of her. There’s never a false step or ill-conceived choice. Goth gives Pearl an inner spark that smolders in disquieting grandeur. Whether dancing in an empty corn field with a top hat-wearing scarecrow, watching a risqué French silent film with the local movie house projectionist, or dancing up a storm at a church audition for a traveling theater troupe, everything she does is aces.

But none of that holds a candle to a climactic monologue where Pearl digs inside herself to discover truths she never thought she’d have the courage to speak aloud, as if doing so would erase any chance she had to get off a path covered in blood and littered with bone. West leaves the camera on her for almost ten full minutes, and Goth holds the screen with titanic precision. It’s stunning, beyond extraordinary even, and I’m still dumbfounded that a gnarly horror yarn like this had the ambitious audacity to make this sequence — and not any of the gorily familiar ones — its uncontested high point.

I loved X. West made a fun little barnburner of incremental grotesqueries that had me wanting to rise to my feet after it was over and cheer. But Pearl is even better. Not only does it stand on its own, but it’s also one of the best films I’ve seen in 2022. It’s pretty much perfect. 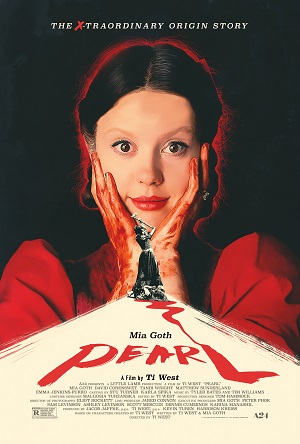