Six rambunctious amateurs head to a rural Texas farm to shoot an experimental pornographic movie. They have come to the secluded home of the elderly Howard (Stephen Ure) and his reclusive wife Pearl. Howard rents the group the large boarding house near a hidden lake on the side of his property, warning them to keep quiet and stay to themselves lest they risk his wrath.

Wayne Gilroy (Martin Henderson) is the moneyman who wants to move from owning a rundown strip club to being a pioneer of what he believes will be the lucrative X-rated home video market. His female stars are his current girlfriend Maxine Minx (Mia Goth) and Bobby-Lynne Parker (Brittany Snow), both of whom are headliners at his club. The male lead is Jackson Hole (Scott Mescudi), Bobby-Lynne’s boyfriend and a former Marine who served two tours in Vietnam. Rounding out the group is writer-director RJ Nicholls (Owen Campbell) and his sweetly innocent girlfriend Lorraine Day (Jenna Ortega), there to assist him during the shoot.

The aptly titled X marks the return of writer-director Ti West, whose last theatrical offering was 2016’s entertaining revenge western In a Valley of Violence starring Ethan Hawke and John Travolta. Returning to his retro horror roots so splendidly showcased in 2009’s The House of the Devil, West channels his inner Tobe Hooper or Wes Craven. He presents a gnarly, sexually provocative thriller that juxtaposes youthful upheaval against the inevitable ravages of old age, all of it showcased with tongue firmly in cheek and middle finger proudly unfurled.

The initial buildup is reminiscent of West’s last horror offering, 2013’s found-footage chiller The Sacrament. Not because his films have similar themes, but more in the way the filmmaker craftily pulls the rug out from underneath the viewer. While there is an unnerving aura that something sinister is going on, the initial focus goes out of its way to soften the idea that unimaginable doom hides in plain sight somewhere on the farm.

What do I mean? After an initial, undeniably ominous get-to-know-you meeting between Wayne and Howard, where the ground rules for what can and cannot happen on the property are enunciated, West allows his primary characters to revel in their creative freedom. He focuses on their sexual and cinematic experimentations, doing so in a manner that is humorous yet empathetic, cynical yet nonjudgmental. A questioning Lorraine becomes the unexpected focal point during this first half of the film, her burgeoning sexual liberation forcing the audience to see these characters and what they are doing in a new, unforeseen light.

Not that it comes as a surprise when the shift happens and skulls get cracked, necks get slashed, and a good collection of the cast ends up dismembered in pools of their own blood. West takes no prisoners, refusing to bow to genre convention as to who should live and who should perish. A palpable sense of doom descends upon the proceedings like an impenetrable fog, everything leading to a goofily ghoulish climax that’s as nasty as it is satisfying.

The entire cast is aces. There’s a sublime scene where Lorraine asks Maxine, Wayne, Bobby-Lynne, and Jackson about their relationships and how they’re able to justify a commitment to one another while still engaging in sexual gymnastics on-camera for the enjoyment of others. The two women immediately take charge of the conversation, owning who they are and what they stand for with confidently euphoric certainty. Snow is particularly good, her supporting performance a constant revelation that reaches its fist-pumping zenith during this pivotal sequence.

Still, as great as she and the rest of the ensemble may be, it is Goth who dominates. She plays two roles —the less said about one, the better — and is stunning in both. This may be the finest hour for the young actor, a mesmerizing talent who has previously wowed in efforts like Suspiria, A Cure for Wellness, and The Survivalist. Goth is dazzling: her dual transformations are ethereal fluctuations of poetically grotesque beauty the likes of which I’ll be thinking about for quite some time.

There are some questions left unanswered by the time a van’s engine laboriously sputters to life and tires chaotically spin in a dusty Texas driveway, not the least of which is what was going on in the dingy confines of Howard and Pearl’s basement. I’m also not entirely sure a final reveal of one character’s true identity is as cleverly amusing as it is meant to be, but as I did chuckle, I guess I shouldn’t be one to nitpick.

This is no great examination of grief. There aren’t any deep psychological themes being meticulously examined. That’s not where West’s interests lie. X rips at the jugular with exuberant joy. This is old-school exploitation horror that isn’t afraid to offend and doesn’t care if the rough edges get sanded down. Its anarchy is cause for celebration, and the ultimate outcome for all this masturbatory excess is a macabre reminder that liberation isn’t free, and that the full cost of rebellion leads to casualties on all sides of the fight. 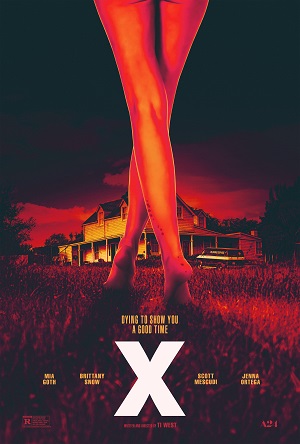