Ne’er-do-well Frenchman Ferdinand (Jean-Paul Belmondo) walks out on his wife and child to hit the road with former girlfriend Marianne Renoir (Anna Karina) for a life of rest, relaxation and crime.

Jean-Luc Godard is not an easy filmmaker to pigeonhole. His films are wildly radical, the majority not allowing for simple plot descriptions or follow any sort of easily classifiable narrative thread. The auteur is an artistic chameleon, his works transformative meditations forcing the viewer to figure out for themselves if his collections of images and sounds have any sort of artistic merit.

His 1965 vehicle Pierrot Le Fou is arguably his last linear film before he started becoming super experimental with films like Two or Three Things I Know About Her and Weekend. It is a relatively simple tale of two lovers making their way across France; stealing, killing, reading and kissing as they go. Everything leads to a collection of double, triple and quadruple-crosses which can only lead to tragedy.

That synopsis is far too simple and nondescript because, while most of what I’ve written does happen, it doesn’t transpire in any normal storytelling fashion. Godard flirts with his audience with just about the same disaffected, yet surprisingly winsome charm, as his then-wife Karina unleashes upon Belmondo, allowing the motion picture to have an accessibly aloof quality that’s hard to quantify or describe.

The director breaks up the action into short vignettes. While each scene is a complete whole, the points in between them all are more or less absent. Do we as viewers fill in the blanks ourselves? Does it even matter if we try to do so? The film isn’t so much concerned about going from A to B to C as it is about skipping around from B to E to M, leaving the other letters an abstract curiosity.

I’d like to say my first impression of Pierrot Le Fou is that of a romantically violent – and slightly musical – frolic, but when you throw in Godard’s commentary about American culture and his pointed attacks on the Vietnam war, those sentiments don’t hold water. For as effervescently trivial as much of this can appear, the filmmaker’s political attacks are furiously pointed, noticeably adding visceral kindling to a fiery discussion allowing for multiple interpretations depending on the viewer’s individual point-of-view.

What is not up for debate is how amazing Karina is as Marianne. Maybe above everything else, I kind of feel like Godard intended Pierrot Le Fou to be a valentine to his wife. She is so lovingly lit and showcased it is was impossible for me to take my eyes off of her. Karina doesn’t just own the picture, she dominates it, and no matter what the actress is doing – or singing – I’m tempted to say her work as Marianne has instantaneously become one of my favorite performances of all time.

As for this strange, bewilderingly strange motion picture, I’m not entirely certain I can be as equally effusive in my praise. While beautifully shot, miraculously edited, ingeniously designed and splendidly acted, the narrative structure is so wild that some portions tended to annoy me more than they sadly did anything else.

Still, this is hardly a picture I will hesitate to return to in the future. While I’m sure there will always be some frustration with how Godard does things here, there are so many stupendous elements I look forward to being emotionally and intellectually discombobulated after each viewing.

Is that a recommendation? Yes. Without question. Godard likes to break convention, but he’s also a fascinating iconoclast whose pictures are one-of-a-kind experimentations I’m always excited to sit down and get a look at.

Pierrot le Fou is no exception. While it isn’t as wildly unhinged as some of the director’s later efforts, it still provides insights into his cinematic mindset, and that in and of itself is no small thing.

Also included is a 46-page liner notes booklet featuring a new essay by critic Richard Brody, a 1969 review by Andrew Sarris and a 1965 interview with Godard

Pierrot le Fou is frustrating and annoying, yes, but it is also spectacular and thought-provoking and features a spellbinding performance from Anna Karina. After Breathless, this is the perfect film to start one’s journey into the world of Jean-Luc Godard. 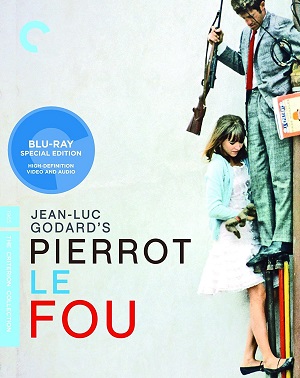