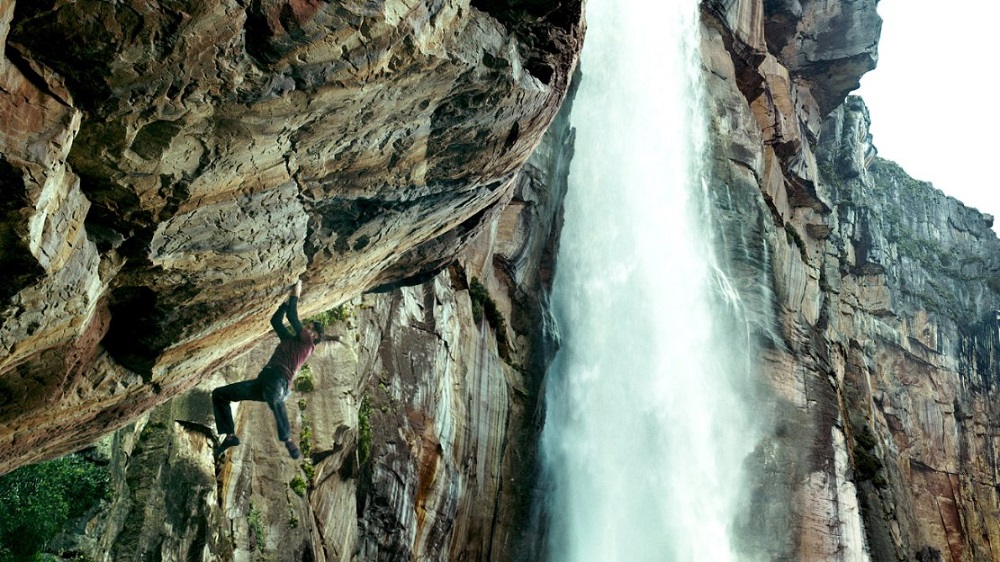 After the tragic death of a fellow extreme sports star, Johnny Utah (Luke Bracey) attempts to reassess his life, spending the next three years striving to be the best of the best and become an FBI agent. At the end of his training, but still under the watchful eye of his by-the-book instructor Agent Hall (Delroy Lindo), the wannabe crime fighter makes a startling discovery. Looking at surveillance footage of a diamond heist where the crooks flew out of the top floor of a skyscraper on motorcycles and then parachuted to safety, he connects the crime to another bizarre theft where the criminals plummeted out of a cargo plane into the jungle below. 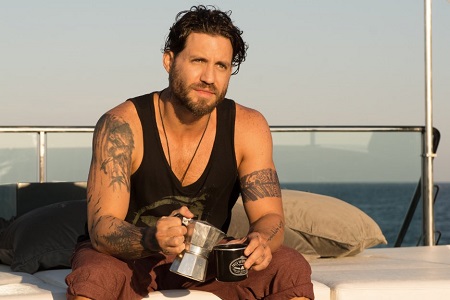 With Hall’s tentative blessing, Utah is sent back into the world of the extreme sports athlete, heading into the middle of the ocean for a big wave surfing competition he’s positive the crew responsible for the two brazen robberies will be a part of. It is here he comes face-to-face with Bodhi (Édgar Ramírez), a persuasive, charismatic man of the world who looks at his own feats of improbable strength and athletic prowess as a way to honor the forces of Nature. Utah is captivated by this fearless guru, but when it turns out he’s willing to do whatever it takes to bring what he sees as balance back to a planet teetering on the edge of self-destruction, the FBI trainee must decide whether to bring Bodhi to justice or let him carry out his idealistic plans no matter what the consequences or who gets hurt.

I’m not going to try and make the case that director Kathryn Bigelow’s 1991 cult favorite Point Break is some unassailable action classic. The film, which chronicles a young FBI agent (played by Keanu Reeves) infiltrating a group of hippie-like surfers (under the command of a charming Patrick Swayze) to bring a tight-knit crew of California bank robbers to justice, is undeniably silly, so unabashedly dopey it’s hard not to imagine writers Rick King and W. Peter Iliff intended it to be that way. But Bigelow’s handling of the film is aces, the Zero Dark Thirty, Strange Days and The Hurt Locker auteur staging a number of unforgettably crackerjack sequences where the kinetic intensity is freakishly high. More, she allows Reeves and Swayze room to cut loose, the latter, in particular, manufacturing a signature character ranking as one of the absolute best of his entire career.

Still, I do get why Warner Bros was eager to remake the film, and I can also see glimmers of what must have inspired director Ericson Core (Invincible) and screenwriter Kurt Wimmer (Total Recall, Salt) – who fleshed out the new story with original writers King and Iliff – to get excited about tackling the project. Bigelow’s film, as memorable as it might be, was far from perfect, and as remakes of Hollywood pulp favorites of yesteryear go this honestly didn’t sound like that dreadful an idea.

Maybe on paper it might not have been, expanding things to allow extreme sports ranging from motocross racing, snowboarding, free climbing and cliff jumping (from the top of a mountain wearing wing-suits, no less) to sit alongside the big wave surfing, but execution is another thing entirely. While I respect the athletes who helped make all of the eye-popping stunt work possible, the truth is that Wimmer’s script is so horrendous it makes King and Iliff’s work on the 1991 original appear Oscar-worthy. Additionally, Core’s staging of many of the big action set pieces is laughably incoherent, the filmmaker, who also served as his own cinematographer, working with his gaggle of editors (three are credited) to craft a visually muddled smorgasbord of mayhem and madness that’s about as appealing as a snowy face-plant into the side of a rocky mountain.

Let’s start with the plot. Utah’s journey to the FBI is rightfully glossed over, as anyone who actually thinks a shamed nincompoop who helped get his riding partner killed flying over the side of a cliff would end up at Quantico probably thinks The Smurfs is an informative documentary about miniature blue people who wear cute white hats. That aside, Utah isn’t a character, he’s a walking, talking compendium of clichés, his motivations and transformation having more to do with making sure the movie gets to the next big stunt sequence than they do anything else. He’s a big, lumbering charisma-free idiot, Bracey not exactly helping by delivering a wooden, emotionally nonchalant performance that’s about as appealing as a lump of coal resting inside a Christmas stocking.

But he’s only part of the problem. How Utah ends up meeting Bodhi. Why he in turns allows the undercover agent to infiltrate his crew. The elements that are fueling the crimes taking place throughout the film. None of that has any weight, any meaning, and as such none of the characters – including Ramírez’s Bodhi – are allowed to make anything close to an impression. This ends up making death meaningless, and by the time hero and villain finally stood face-to-face I could have cared less about either of them and likely wouldn’t have shed a single tear had the movie thrown the ultimate twist and drowned both under a massive 100-foot wave.

None of which would matter near as much if the action sequences lived up to the obvious efforts Core and his crackerjack team of athletes and stuntmen put into them. In a year where we’ve thrilled over the practical thrills and chills offered up in summertime tent poles Mad Max: Fury Road and Mission: Impossible – Rogue Nation, Point Break had the potential to outdo both of them with the adrenaline-fueled set pieces it devotes the majority of its focus to. Unfortunately, most are nothing more than hyperactively edited, visually nonsensical hogwash, the majestic spectacle somehow inexplicably lost in all the senseless Sturm und Drang.

There is one exception, and it is admittedly glorious. Bodhi and his team convince Utah to follow them on a mysterious hike to the top of an exceedingly high mountain, at the summit of which they spend the night. The following morning? They jump off wearing those aforementioned wing-suits and the resulting sequence is positively wondrous. Core’s camerawork is exemplary, while the editing is smoothly organized and visually seductive. It’s also the only point Tom Holkenborg’s (Black Mass) rambunctious score becomes one with the movie around it, everything coming together in a way that only made the anemic awfulness of all the rest stand out that much more.

Awful is potentially kind. Ramírez is a legitimately great actor, and somehow this movie makes him look amateurish and unfocused. But the same could be said about Lindo and Ray Winstone (taking over the role of Utah’s seasoned partner Pappas, failing to make as memorable an imprint as Gary Busey did in the original), Wimmer’s script throwing all three under a bus almost as if it didn’t want anything to do with any of them. 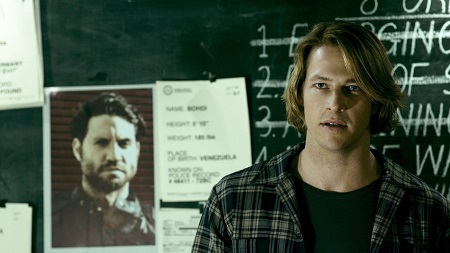 Then there is Teresa Palmer, playing the lone female character, the wistful flower child Samsara, and potential love interest for Utah. In a year with so many kick-butt heroines (Imperator Furiosa, Gaby Teller, Katniss Everdeen, Sin-Dee, Ilsa Faust, Nelly Lenz and Star Wars: The Force Awakens’ Jedi-in-the-making Rey all come to mind), this might just be the most regressive female character in any major Hollywood feature this year. The movie slaps Samsara around, treats her like a tattoo-covered sex object and little else, her whole arc about as senseless, and as insulting, as anything I’ve personally seen in quite some time, something made even worse when you consider the 1991 testosterone-laden original film and the magnetic imprint Lori Petty still managed to make inside of it.

Again, I’m not going to say remaking Point Break was a bad idea in and of itself. But missing the point of Bigelow’s original, failing to equal the bristling, comic book machismo it reveled in, while also sabotaging the efforts of the death-defying stunt people working so hard to bring the remake’s action sequences to life, Core and Wimmer don’t just make a bad movie, they make one so terrible it’s flabbergasting just how ghastly it actually is. Rarely have I ever wanted to walk out of a film before it was over. This was one of those instances where I wished I could have done just that. You’ve been warned. 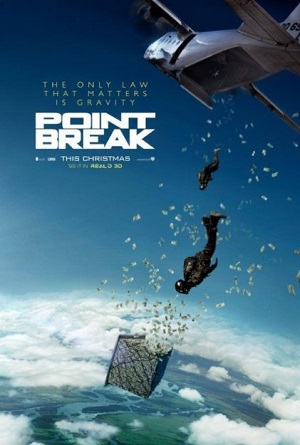