A man (Adrien Brody) awakens to find himself in freefall. The air whooshes by, seconds pass like hours, and the ground grows closer and closer by the instant. Almost as if by magic a parachute opens with a violent rush, this nameless figure understandably shaken by the events he’s sadistically been forced to experience.

But as great as this opening is, I’d be lying if I said the filmmakers maintain those sensations any longer than a couple of minutes. From the moment the rest of the film’s ragtag group of mercenaries, killers, and psychopaths (including Topher Grace, Alice Braga, Walton Goggins, and Rodriguez regular Danny Trejo) also drop from the sky, things start to progress in an oddly straightforward manner. This disheveled company discovers they’re being hunted and will need to work together if they’re going to survive. They also realize they’re no longer on Earth, each coming to grips with the fact they’re victims of an alien abduction whose sole aim is to make them the stars of an interstellar version of Richard Connell’s The Most Dangerous Game with unbelievable ease.

It doesn’t matter that Rodriguez and Antal haven’t so much crafted a continuation to Predator as much as they’ve constructed an off-world remake. Brody takes on the Schwarzenegger role, while the rest of the ensemble attempt to fill the shoes of Carl Weather, Jesse Ventura, Bill Duke, et al. While there are definite differences between the two thrillers, the basic narrative mechanics haven’t changed very much, and even with a mentally unstable Laurence Fishburne wandering around to keep things interesting, I was never surprised by anything that happened.

I still had a good time watching this sequel. Scenes of the eight strangers getting to know one another in typical tough guy fashion (hurling insults, sharing baby pictures, beating each other to a bloody pulp, etc.) work rather nicely. There’s also an excellent escape sequence featuring carnivorous Predator hunting dogs. One of the best bits is a set piece involving deadly homemade jungle traps that’s a clever variation on a similar sequence from McTiernan’s classic, Antal staging things with amusing bone-crunching frivolity.

But the basic plot is essentially still the same one that Jim and John Thomas came up with 23 years ago, only this time the action is set in an intergalactic game preserve, and instead of a single Predator facing off against our heroes, now there are three of them. Granted, the entire film is designed to keep things mostly on a one-against-one level, and other than a brief second act bit at a hunting camp the only time multiple predators show up to do any sort of damage is when they have the urge to fight against one other, not against the humans who are their intended prey.

Considering how sound the premise is and how sensational that opening freefall sequence is, it’s understandable I wanted a bit more than what was delivered from this sequel. But Predators is a lot of fun, and as matinee entertainment, the film does deliver most of the requisite goods. It’s an appropriately bloody intergalactic hunting trip, and if further safaris happen in the wake of this one I’d consider heading out into the unknown on those, too, especially if Rodriguez and Antal continue to be involved with organizing them. 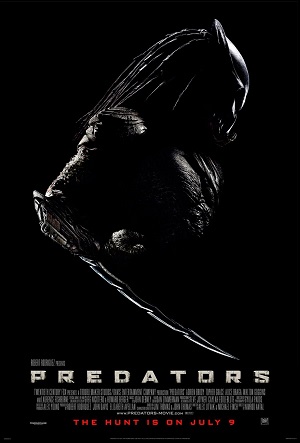