Prometheus is not a prequel to Alien. Ridley Scott has stated this in numerous interviews that his movie had, “Alien DNA,” but was otherwise unconnected to his 1979 opus or the three sequels which followed it. As dubious as that claim sounded at the time, after watching it for myself I think it is plainly clear he was attempting to be honest, the director’s return to the world of science fiction for the first time since 1982’s Blade Runner far more than your average intergalactic creature-feature.

That’s what Prometheus is not. As for what it is? A week later I’m still trying to figure that one out. At its core, Damon Lindelof (Cowboys & Aliens) and Jon Spaihts’ (The Darkest Hour) intricate and complicated screenplay wants to be about the origins of man, wants to be a theoretical discussion about Darwinism and religion and how both relate to evolutionary theory. Who are we? Where do we come from? Where do we go from here? Are we alone in the universe? These are just a few of the questions the film asks, the end product not so much reaching for answers as it is more interested in reigniting the cooling embers of an age-old debate.

Yet the movie is also a big budget Hollywood thriller, filled with stock characters, familiar story beats and a series of scares most of which can be seen millions of light years away. It frequently doesn’t quite know what to do with itself, the final product reaching for the stars and frustratingly coming up short as it waves at them with somewhat fruitless abandon.

After an ominous and unsettling opening title sequence, things begin in 2089 with two archeologists, Elizabeth Shaw (Noomi Rapace) and Charlie Holloway (Logan Marshall-Green), making an otherworldly discovery in Scotland’s Isle of Skye. Fast-forward a couple of years, the pair are aboard the spaceship Prometheus heading to an unexplored planet in a far corner of the galaxy. Their expedition has been financed by elderly industrialist Peter Weyland (Guy Pearce), the billionaire sharing their interest in discovering mankind’s origins.

From there things follow go down a relatively routine path. Headstrong captain Janek (Idris Elba) is skeptical their excursion to this planet, child-like humanoid robot David (Michael Fassbender) might not be as innocent as he appears and icy company executive Meredith Vickers (Charlize Theron) hides an agenda she’s loath to share with Shaw and Holloway. This group of scientists and astronauts will explore the planet, make shocking discoveries and learn things about the aliens who first came to the planet they never could have anticipated beforehand, uncovering a secret that could very well lead to Earth’s demise.

What isn’t expected is just how hypnotic the first two-thirds of this interstellar adventure prove to be. Scott orchestrates the action with almost Kubrick-like efficiency, weaving all of Lindelof and Spaihts’ nebulous plot strings together masterfully. Subtle homage is paid to both Alien and Aliens, while the first foray into the mysterious complex that once housed gigantic beings similar to humans yet far more advanced than them is an astonishing feat of technical, visual and storytelling wizardry. The movie drew me in, every fiber of my being intimately invested in learning more.

So what’s the problem? First off, while the majority of the cast is excellent, Rapace, Theron and Elba especially, none of them are playing characters who end up being particularly memorable. Some of what they do or how others respond to their actions do not make a lick of sense, the final third so overly frenetic a lot of what is being said is lost in the sound and fury. Marshall-Green’s character is a whiny wet noodle I couldn’t wait to be done with, his sullen response to his and his beloved’s monumental breakthrough on this heretofore unexplored world extraordinarily bizarre.

Yet in no way can Prometheus be written off. Even with my dissatisfaction with the last 20 minutes I can’t wait to see the film again, to let what Scott is talking about sink in a bit more thoroughly. I’m also beyond taken with Fassbender’s David, easily the movie’s most intriguing character, his evolutionary process the key ingredient around which everything revolves. The actor is magnificent, his performance another in a long line of divine balancing acts proving he just might be the most revelatory talent working today.

Forget about the monsters, forget about the Machiavellian corporate tinkering, forget about Shaw’s handling of an invasive abuse of her body which literally caused one member of my preview audience to faint from shock. None of that matters as far as the grand scheme is concerned. It is David who matters the most, his journey the one I tend to feel will have the most long-lasting impact and the one where most of the answers to many of the drama’s humanistic riddles will ultimately be found if this story continues with future motion pictures.

It is easy to see why, after 30 years, Scott chose Prometheus as his return to science fiction. It gives him a massive canvass to work on and allows him to tackle questions he’s tinkered around with in one way or another since 1977’s The Duelists. If this adventure ends up leaving something to be desired it isn’t for the lack of trying. Scott’s gone all out with this one, and as far as evolutions go his into Stanley Kubrick or Terrence Malick isn’t as ungainly or as farfetched as one might initially believe it would have been. 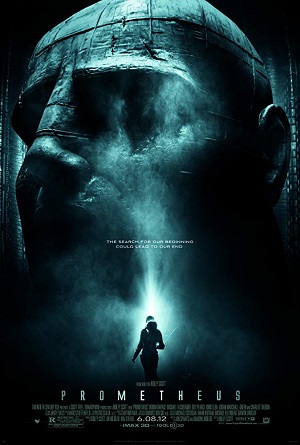