A 21st century riff on classics like Bonnie and Clyde, Badlands, Thieves Like Us and Thelma & Louise, the emotionally explosive Queen & Slim is a nightmare romantic thriller ripped straight out of today’s headlines. It is a chronicle of corruption, abuse and racial inequality where a defensive act of violence becomes a frightful trek of survival and discovery, this road trip into the unknown a breathlessly visceral journey that almost can’t help but end in tragedy.

Queen (Jodie Turner-Smith) and Slim (Daniel Kaluuya) have almost nothing in common. After their first, and likely only, date heads towards its conclusion, the pair are pulled over for what appears to be a minor traffic violation. Queen is a lawyer and quickly realizes things are not going well and Slim is in mortal danger, but when she tries to use her cellphone to record this encounter the officer shockingly shoots her in the leg. Whether by accident or on purpose things take a decided turn for the worst after that. Fearing for Queen’s life, Slim gets into a fight with the cop. One thing leads to another and the officer ends up dead, the pair forced to grab his gun and flee into the night knowing that Southern law enforcement will not be quick to believe their story this all happened in self-defense.

Directed by Grammy-winner Melina Matsoukas (the mind behind Beyoncé’s “Formation” video) and written by Emmy-winner Lena Waithe (“Master of None”), Queen & Slim is nowhere as simple as that synopsis makes it sound. This is a sprawling, almost epic drama that goes in several intriguing, and oftentimes increasingly outraged directions, all leading to complex societal and political questions most of which are purposefully left unanswered. There is no easy out here, no simple resolutions, everything leading to a place of carnage and sadness that is as eye-opening and haunting as it is disgustingly unavoidable.

Clueless members of the audience will wonder why Queen and Slim don’t turn themselves in. They will mention that the officer had a dashboard camera and the entire incident was caught on film. They will try to argue that these two characters make a catastrophic mistake when they run and shouldn’t be raised up as heroic figures for doing what they did. These are all arguments I do not hold to. While there are other options for the pair, I think that the way Waithe has crafted this story it’s blatantly obvious what would lead Queen and Slim to hit the road instead of standing put to face the music for what happened. In that split second after the gun is fired and the officer hits the asphalt their decision to flee honestly made sense to me, and I find it difficult to understand how others watching the film could ever think or believe otherwise.

Even with that being the case, the key to this drama’s success is that Matsoukas never lets the characters off the hook. She doesn’t sugarcoat what has happened but she also doesn’t apologize for any of the mistakes that are made by the pair after they have hit the road. Instead, she and Waithe are intent to analyze the American underbelly in ways we seldom are privy to get a look at within the confines of a major Hollywood studio production. Queen and Slim unwittingly spark adoration, fear, anger and even violence, and while all they want to do is survive to see another sunrise the effect they end up having on America’s racial divide is undeniably substantial.

Much of this works magnificently. The opening late-night traffic stop followed by the pair’s subsequent flight into the darkness is stunningly realized, the entire sequence drowning in heartrending tension that had me sitting in my theatre seat as if I were straddling a razor-sharp dagger. There’s also a terrific sequence where Queen turns to her estranged relative Uncle Earl (Bokeem Woodbine) for help, the pools of regret that pass between them so deep I wondered for a moment if I were going to accidentally slip inside one of them and drown. I was also struck by a set-piece inside the home of the Shepherds (Flea, Chloë Sevigny), their dinner table chat a powerful back-and-forth that’s abruptly cut short for reasons best not recounted here.

Other bits I still can’t quite fully embrace and fit inside the larger narrative as well as I would honestly like to. There’s a sequence where Queen and Slim are forced to stop at an auto shop for assistance that ends up leading to a day-long stroll and conversation with the mechanic’s teenage son Junior (Jahi Di’Allo Winston) that offers up a great deal in the way of food for thought. While I think I understand what Matsoukas and Waithe are trying to do here I’m honestly uncertain what ends up transpiring next works particularly well. A senseless act of violence is juxtaposed with a moment of emotional and sexual need neither of which feels as organic to the larger story as almost everything else inside the motion picture does. It left me scratching my head while also placing a somewhat bad tasting pill in my mouth that I was unable to spit out, and I’m still not entirely certain what it is the filmmakers were wanting me to take away from this moment afterward.

Both Turner-Smith and Kaluuya are magnificent, however, while Woodbine turns in a supporting performance that’s arguably the best he’s given in his 25-year career. Better, even at a methodically paced 132 minutes, Matsoukas’ debut never feels like it is overstaying its welcome, her film an immersive descent into the modern political, cultural and racial morass that grows in authoritative ferocity as it goes along. She gives cinematographer Tat Radcliffe (White Boy Rick) the freedom to shoot things in hushed elongated takes that grow in nervously primal urgency, the vistas rushing by outside the car’s windows becoming increasingly expansive and expressive as the pair inch closer to their secretive destination.

I’m still not entirely sure how I am supposed to react to the climax to this story. There are numerous unanswered questions which I am certain is by design. The conclusion also left me stewing in a sea of anger, and I can’t help but feel that was the screenwriter’s intent as well. But Waithe and Matsoukas also close on an image of hope, one that appears to also be on the verge of being co-opted by interests more corporate in nature than they are grassroots. This apparent hypocritical duality was also likely intended, but it has left me uncertain as to what my response to all I witnessed was now supposed to be.

Granted, maybe that is the point to Queen & Slim. The are no easy answers. Heck, there might not be any answers at all. 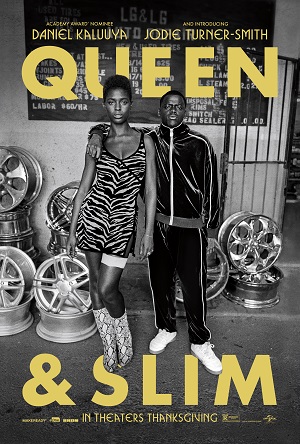