Raging Fire is the final film of Hong Kong maestro Benny Chan (Who Am I?, Call of Heroes). While this brawny policier owes a huge debt of gratitude to Michael Mann’s Heat, that does not mean this bruising slugfest isn’t something special in its own right. Stars Donnie Yen and Nicholas Tse go memorably head to head, while Chan stages some of the more ferociously pugnacious action set pieces of his illustrious career.

The plot isn’t especially groundbreaking: Veteran Hong Kong detective Bong (Yen) is hunting a lethal crew of thieves responsible for the deaths of several police officers when an after-hours heist at a downtown mall goes sideways. Ngo (Tse) is a former detective who was railroaded into prison after his superiors threw him under the bus when a dockside interrogation went tragically wrong.

Bong and Ngo used to be the best of friends and the most trusted of co-workers. Now they are at one another’s throats. This combination doesn’t leave a lot of room for surprises, and the final outcome is never in doubt.

Not that it matters. Chan’s script is a master class of pitiless wit and eviscerating brevity. Even at just over two hours, time flies by in the blink of an eye, and the compulsive beat of the merciless drum moving Bong and Ngo closer to their climactic confrontation is impossible to resist. The fists are fast, the bullets hit their targets, and the kicks land with concussive ruthlessness. There is no quit to this film’s deadly march to its finale, with Chan delivering an explosively exhilarating juggernaut I can’t wait to watch again.

What’s amazing is how emotionally multifaceted all of this is. The narrative is built on a foundation poured from the blood, sweat and tears that Bong and Ngo’s long relationship has inadvertently produced. It is only by a cruel twist of fate that the former didn’t find himself wearing the shoes of the latter, and it is that haunting realization that compels the detective to be the one who stops his former protégé in his pursuit of revenge-fueled carnage.

Funny enough, for a picture overflowing in spectacular stunt work and stunning action sequences, it is a quiet moment between hunter and prey in a cold interrogation room that ends up delivering the most combustible wallop. Much like the fabled coffee shop scene in Heat, this bit between Yen and Tse showcases both actors at the top of their respective games. They play off one another with beauteous ease, the pair so in sync that their performances come astonishingly close to being symbiotic.

Much of the extraneous stuff falls a little flat. Bong’s veteran team of fellow officers more than deliver during the violent moments, each handling themselves magnificently whether in the middle of a dangerous shoot-out or fighting members of Ngo’s crew one-on-one. But none get a signature moment that might allow any of their characters to stand out from the crowd, and because of that, they all become rather faceless drones difficult to care about one way or the other, especially at the end when all bets are off and anyone could die at any second.

The same can be said about most of Ngo’s men, all also fellow former police officers who were bulldozed into prison alongside their boss. They get a little more to do than Bong’s team does, but even when they’re asked to do something murderously ugly, it’s only to service a future plot development. They are chess pieces, pawns really, and as skillfully as Chan moves them around the board, that still only makes them cannon fodder, existing solely to be maliciously sacrificed and nothing more.

That none of that is a big deal has everything to do with the virtuoso performances of Yen and Tse as well as the superb action that’s arguably the best I’ve seen in all of 2021. Car chases. Shootouts. Brutal fights, many of them between multiple adversaries wielding clubs, knives and all sorts of slice-and-dice weaponry. It’s all here, and every bit is glorious.

Chan was diagnosed with nasopharyngeal cancer not too long after shooting on this picture wrapped, and succumbing succumbed to the disease in August of last year. It The film is unsurprisingly dedicated to him, and his confident handling of the material is beyond reproach. For a career cut short right in the middle of its apparent prime, this might just be the director’s finest hour, and while I mourn his passing, I’m nonetheless ecstatic that with the release of Raging Fire, we get to celebrate his excellence at the exact same time. Bravo. 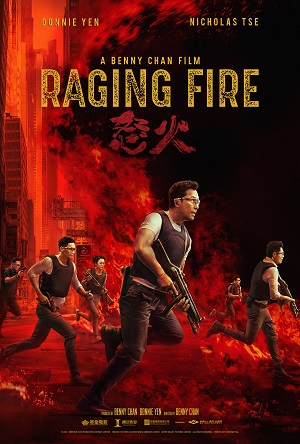