Thrilling Raya a Hopeful Adventure in Forgiveness and Faith

It has been 500 years since the land of Kumandra split into five separate nations: Heart, Tail, Talon, Spine and Fang.  In that time, humanity has become increasingly fractured, the result of a recent calamity during what was supposed to be a meeting to promote peace and prosperity, leading to a dystopian nightmare that literally transformed thousands of souls into lifeless statues.

Raya (voiced by Kelly Marie Tran) is the daughter of Benja (Daniel Dae Kim), the beloved former chief of Heart. He once invited all of the lands of Kumandra to sit at his table in amity. But the unexpected discord from this one event has brought back the devilish Druun, a demonic force that turns all it touches to ash and stone. Ever since, Raya has been on a quest to find the fabled last dragon, Sisudatu (Awkwafina), who once saved the world from this very menace five centuries prior and whom she prays can do so again now.

Spectacularly animated and building to a heartfelt conclusion rooted in community and togetherness, Disney’s Raya and the Last Dragon is a stupendously entertaining adventure the entire family is almost certain to enjoy. While the narrative structure is a bit all over the place and not quite as focused as I would have liked, the emotional currents running through this raging whirlpool of friendship and family are all genuine. My heart was touched, and all I wanted to do when this picture came to an end was watch it again from the beginning.

It honestly doesn’t take Raya long to find Sisudatu and to fill her in on all that’s happened over the centuries she was asleep. The wisecracking dragon immediately agrees to join the young woman on her quest to save Kumandra, even though they disagree on the best course of action. Raya does not trust anyone; certain they will betray her. Sisudatu believes the opposite, choosing instead to have faith that humanity will do the right thing if given the chance.

This is the core argument at the center of directors Don Hall (Big Hero 6) and Carlos López Estrada’s (Blindspotting) visually resplendent Southeast Asian-inspired fantasy. Will Raya rediscover her compassion? Can she confide in those she encounters the truth of her expedition? If so, will they be able to reunite Kumandra’s perpetually wary kingdoms? Or will their land remain fractured and torn apart, leaving the Druun the freedom to destroy all they touch?

There are definite Mulan-meets-The Emperor’s New Groove vibes happening throughout, especially early on, with Awkwafina’s uninhibited performance appearing to be inspired by Eddie Murphy’s memorable work in the former and David Spade’s hilarious turn in the latter. These freewheeling comedic antics initially felt slightly out of place, and it took me a bit to get a handle on what it was the filmmakers were asking her to do. But there is a scene about 30 minutes in where Sisudatu’s goofily friendly demeanor changes on a dime, the raw power of Awkwafina’s line delivery during this moment startling in its stark, unvarnished candor.

From this point forward the film comes electrifyingly alive. Sure, it was fun. Sure, it was colorful. Sure, it had energy. But now it tapped into something exciting, something so universally relatable and inherently personal that I sat a little straighter in my seat as my interest in all that was happening grew. The connections between characters intensified, and while nothing is shocking about the climax, I nonetheless still had to reach for the tissue box to hold back a waterfall of joyful tears.

While hardly original, I loved how this story pits its protagonist Raya and its antagonist Namaari (Gemma Chan), daughter of the Fang chief Virana (Sandra Oh), against one another. They are mirror images, each the child of a single parent raised to be leaders of their respective clans. The fire fueling their animosity burns through the screen, making Sisudatu’s efforts to ease their pain and quell their hatred all the more effective.

Raya and Sisudatu are eventually joined on their quest to save the world by members from Tail, Talon and Spine. As for the pieces of a magical blue bauble that brings them all together, it’s nothing more than a sparkly MacGuffin allowing each an opportunity to explore their grief over having lost loved ones to the Druun. I won’t go into any detail about these elements, as I’d rather audiences experience these interactions and mini-adventures without my spoiling them, especially the band’s playfully dizzying stop in Tail.

Raya and the Last Dragon made me feel good. It brought a smile to my face. Having watched it twice now, I can say without hesitation that its message regarding kindness, empathy and trust is a strong one. The film’s concluding moments spoke to me on a level I was not anticipating, and the story’s message that the best hope for a better tomorrow is working together selflessly as one is beautifully delivered and even easier to embrace. 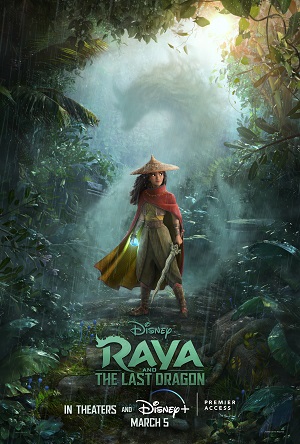