FBI profiler John Hartley (Dwayne Johnson) has assisted Interpol agent Inspector Urvashi Das (Ritu Arya) in apprehending the world’s second-most successful art thief Nolan Booth (Ryan Reynolds) right after he managed to lift one of three priceless golden eggs once owned by Cleopatra. In doing so, he is framed by the world’s number one art thief (Gal Gadot), known only by the alias “The Bishop,” as a thief himself, so Inspector Das is forced to toss Hartley into a maximum-security Russian prison right next to Booth.

That’s the setup for Red Notice, a globe-trotting heist adventure-thriller written and directed by Rawson Marshall Thurber (Skyscraper, Dodgeball: A True Underdog Story). Hartley and Booth join forces, escape from prison and attempt to stop Bishop from laying her hands on the two remaining eggs, with Inspector Das hot on their trail the entire time. During their travels, they steal from murderous arms dealer Sotto Voce (Chris Diamantopoulos) and journey to South America to investigate a Nazi bunker cleverly hidden in the depths of an impenetrable jungle.

Sounds like fun, right? Wrong. Other than a few clever bits — and in large part due to the gigantic charismatic aura effortlessly exuded by Johnson and a couple of bursts of clever invention from Reynolds — this is about as calamitous a big-budget action spectacular as any I’ve watched in ages. The whole thing feels as if it were assembled in a board room: Insert quip here. Add a meticulously choreographed set piece there. Connect one dot to the second dot to the third dot to… well… you get the idea.

The movie comes across as a bombastic paint-by-numbers Indiana Jones-meets-True Lies-meets-Dirty Rotten Scoundrels retread, and what should be a breezily enchanting old-school throwback instead comes on like a roundhouse to the face and a swift kick to the gut. Everything is mechanical and nothing feels organic or genuine. I only kept watching because I refused to believe the end result could be as terrible as the opening act. Everyone involved was far too talented for that to be the case.

The good news? Red Notice does get a bit better as it goes along. The actual heist at the Sotto Voce estate is moderately amusing, while a sudden third-act transformation into a bromance version of Romancing the Stone did bring on a passing chuckle. Most of all, as tiresome as his deadpan, self-effacing comedic schtick can be, Reynolds tosses in a few winning moments of goofy inspiration I did not see coming, and to say he gives the film’s best performance is something of a moderate surprise.

Not that it matters. The more massive actions sequences are smothered in a digitally-augmented veneer that makes them look muddy and like a video game cutscene from an Uncharted installment. Arya is frustratingly underutilized, and her character is hopelessly underwritten. Gadot attempts to smile her way through the proceedings yet is given so little to do that she makes almost no impression whatsoever. Don’t even ask me about a groan-worthy scene involving a hair tie, seconds before a big fight.

I could keep going, but I’m not sure I see what the point would be. I gave Red Notice my full attention, and all it gave me back was a headache. As far as I’m concerned that says it all. 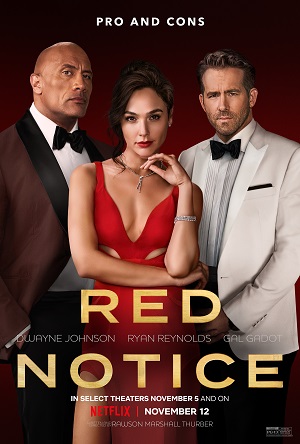