After college senior Sawyer Scott (Hermione Corfield) receives a surprise phone call regarding a plum new job located in Washington, D.C., the ambitious young woman drops everything, including plans to head home for Thanksgiving, to drive cross-country for an interview. While passing through Kentucky she inadvertently takes a wrong turn and gets hopelessly lost, her GPS not helping matters and, if anything, just keeps sending her in increasingly annoying circles. After Sawyer stops on the side of the road to get her bearings, brothers Hollister (Micah Hauptman) and Buck Pritchert (Daniel R. Hill) pull over to offer their assistance.

Or so they say. Actually, after watching Sawyer drive around aimlessly they’re worried she might have seen the two of them doing something criminal just off the side of the road. As the two work for one of the more ambitious methamphetamine producers this side of the Appalachia Mountains, the siblings decide they’re not going to take any chances and will make sure a tragic accident befalls the young woman. But Sawyer is quicker on her feet and sharper of intellect than they both surmise, and even though she suffers a ghastly wound to her thigh she still manages to escape into the woods with her life.

Things get stranger from that point forward in director Jen McGowan’s (Kelly & Cal) suitably minimalist thriller Rust Creek, her extremely well-crafted feature an inventive combination of Wrong Turn, Deliverance and a top-tier episode of “Justified.” But screenwriter Julie Lipson gives things an aggressively feminist spin that suits the story nicely, events having a primordial angst that uncomfortably blurs the line between right and wrong. It’s compelling stuff, and even if things work themselves out in ways that are hardly shocking I still enjoyed watching this one quite a little bit.

The pivotal turn in the plot happens with the arrival of secretive meth cooker Lowell (Jay Paulson). He saves Sawyer from her travails in the forest and tenderly nurses her wounds. But for a variety of reasons he also can’t let her go, and while he’s not exactly keeping the woman prisoner, he’s also not about to allow her to wander alone in the wilderness anymore or, even worse, make her way back to the main road and go running for the police. Lowell isn’t an evil man but he is involved in some very bad business, and as such his options as to what to do with Sawyer are severely limited.

What’s great about Lipson’s script is that she doesn’t make even a passing attempt to transform this story into a romance. Instead, it ends up being more a meeting of minds, Sawyer and Lowell learning intimately personal things about one another that allows an understanding bond to form between them. Their blossoming friendship is born from an organically authentic need to learn what it is that makes the other tick. There is no judgment. There is no long-winded speech about how circumstance and poverty have forced Lowell to become an expert meth cooker or why misunderstanding and distrust has led Sawyer to become estranged from her parents. Instead it’s just two people trying to make the best of an impossible situation, and personally I found this part of the story to be undeniably fascinating.

While there’s some dialogue that touches upon life’s various twists of fate as they apply to both characters, Lipson allows these two adults to get to know one another as human beings first before any of that nonsense is spoken aloud. This gives the film surprising depth, and I really liked how natural the pair’s growing connection with one another proves to be. Paulson’s understated performance is wonderful, while a pair of critical scenes between his character and the Pritchert brothers ooze in unnerving hostility. As for relative newcomer Corfield (she played one of the Syrens in Guy Ritchie’s King Arthur: Legend of the Sword and the ill-fated A-Wing pilot Tallie in Star Wars: The Last Jedi), the young actress is nothing short of excellent. She delivers a robust, dynamically vibrant performance, the ravaged and wrecked physicality of her portrayal only exceeded by the emotional complexity she ends up confidently infusing Sawyer with.

McGowan never overplays her hand, and while she doesn’t push the pace she just as importantly never allows things to feel as if they are dragging or filled with any superfluous fluff. Her staging of the initial confrontation between Sawyer and the Pritcherts drowns in a form of claustrophobic dread that made me suitably sick to me stomach, and I loved how in even the story’s quieter moments there’s a palpable sense of uneasiness that never dissipates.

A subplot involving the local sheriff (Sean O’Bryan) and his overly diligent deputy (Jeremy Glazer) isn’t as effective as other aspects of the narrative prove to be, while the identity of the person pulling all of the strings that tie everyone together isn’t much of a surprise. Granted, considering McGowan and Lipson don’t play this aspect of the plot all that close to the vest it’s pretty obvious the pair understand audiences are likely to figure out what’s going on rather quickly. As such, they make the reveal of who this person is and what motivates them to do such murderous evil fairly early on and because they do this character actually becomes more despicably threatening as things move towards their climax.

By doing this the film bristles over with an intense form of anxiety and terror it might not have possessed otherwise, making me believe this twist was never meant to be considered a secret in the first place. Rust Creek is a strong thriller that does both its central characters as well as the audience watching it proud, treating both with intelligence and respect for the entirety of its 108-minute running time. It starts 2019 off on the right foot, keeping me excited to discover what the remainder of the year is going to offer up for me to watch next. 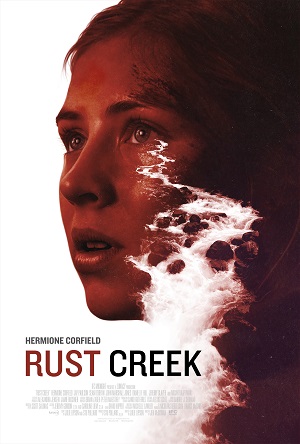