Just as Terrier Max (voiced by Patton Oswalt) and his new best friend the gregarious mutt Duke (Eric Stonestreet) have gotten into an easy everyday rhythm, their sweetly caring owner Katie (Ellie Kemper) goes and gets married. Worse, she has a kid, Liam (Henry Lynch). But where Max initially is hesitant to warm to the child, in no time at all he’s as protective of the little guy as both his parents are. In fact, a case could be made that he’s overprotective, going above and beyond to keep him away from anything even slightly dangerous, even if said danger only exists in the little dog’s overactive imagination.

Fast-talking rabbit Snowball (Kevin Hart) has embraced being pint-sized Molly’s (Kiely Renaud) pet. The bunny has forgotten his former human-hating ways and instead grown to love being embraced by his owner every morning. In fact, he’s so caught up in her imaginary games he starts to believe he’s the powerful superhero “Captain Snowball” after Molly starts dressing him up in a pair of sparkly blue pajamas. When energetic Shih Tzu Daisy (Tiffany Haddish) shows up on his windowsill barking for help in order to save a timid white tiger cub from a malevolent circus ringmaster, Snowball bounces into action, never imagining that by doing so he’d inadvertently put the wellbeing of every creature living inside their New York apartment building in danger.

I loathed 2016’s The Secret Life of Pets. Not only did I feel it didn’t live up to the promise of its title and its central idea (what pets do at home when their owners are away), I also found it repugnant on a number of fundamental levels. It is a movie that makes me increasingly furious the more I’m forced to think about it, it’s entire second half a cacophony of insipidly frenetic violence and nonsensical idiocy that’s not just tiresome, it also comes perilously close to being irritatingly offensive.

Suffice it to say, my hopes in regards to The Secret Life of Pets 2 weren’t especially high. So, imagine my surprise when I came out of the theatre after the sequel with a smile on my face and a skip to my step? To call this a massive improvement over the first film is something far beyond an understatement. While not without its hiccups, and while still feeling more than a little inconsequential as far as the greater scheme of things is concerned, it still gets so much right and is filled with some many numerous little pleasures it’s hard to hold those missteps against it. This second chapter in Max’s story is refreshingly amiable, and even though the climax devolves into trite silliness that’s still kind of okay, the overall beguiling cheerfulness of it all just too infectious for me to resist.

What’s interesting is how returning director Chris Renaud (Despicable Me), co-director Jonathan del Val and screenwriter Brian Lynch (Minions) manage to balance three competing storylines with such easygoing nonchalance. Not only do they have Max and Duke in the country and Snowball and Daisy trying to save that tiger, but they’ve also got a subplot involving Pomeranian Gidget (Jenny Slate) having to learn how to impersonate a cat from the vainly self-possessed furball Chloe (Lake Bell) in order to rescue a squeaky chew toy from an apartment filled to the brim with vicious kitties. The filmmakers bounce back and forth between this trio of stories with precision, never lingering on any one of them longer than necessary so that none overstay their welcome. It’s bubbly and light, and even more importantly it tends to deliver on the promise of the title in ways its predecessor rarely did, making this sequel goofily agreeable in the process.

The Max and Duke story works best. Harrison Ford, delivering his first-ever vocal performance in an animated motion picture, is a gruff, growly hoot as a wizened old farm dog named Rooster. His reactions to Max’s smothering of Liam is wonderful, while his offhand wisecracks as he tries to school the terrier in ways to put aside his fear and learn to embrace the life-lessons the world unexpectedly throws one’s way are nothing short of priceless. The whole section is undeniably the film’s high point, and while other segments have their charms this is the one I’m going to be remembering long after the others have faded from my memory.

Not that the stuff with Gidget and Chloe isn’t pretty solid, Slate and Bell showcasing such winning chemistry I almost want them to share the screen in a live-action comedy so I can see them do this as humans and not as animated family pets. As for the section with Snowball and Daisy, I was fearful it was going to be unbearable and was pleasantly surprised to discover otherwise. There’s a quirky inventiveness to this subplot that works a lot of the time, and while the part of the film is easily the weakest of the three, I still found it to be just pleasant enough that my overall good mood watching things play out was never in danger of being threatened.

While the climax does finally bring all of the characters and storylines together into one, it is also the one portion of the sequel that doesn’t work that well. This elongated chase sequence, while having a handful of visual delights, is too obvious and tired to be as strong as the first two-thirds of the motion picture thankfully prove to be. Much like the studio’s other endeavors, ranging from the first Despicable Me to last year’s holiday hit The Grinch, this one gets far too hectic and rambunctious for its own good, the filmmakers appearing to believe that chaos and carnage are the keys to a successful ending while seemingly eschewing the simple, quietly emotionally-driven peculiarities that helped make the remainder of this story so shrewdly effective.

Luckily this doesn’t do lasting damage to The Secret Life of Pets 2. The sequel improves upon the first film in every conceivable way in my opinion, unleashing a trio of beguiling little stories that kids of all ages are almost certain to find enjoyable. As for the adults, there’s lots to like about this bit of animated fluff as well, making the journey to the theatre to see it a far more pleasurable experience than I admit I thought it was going to be. 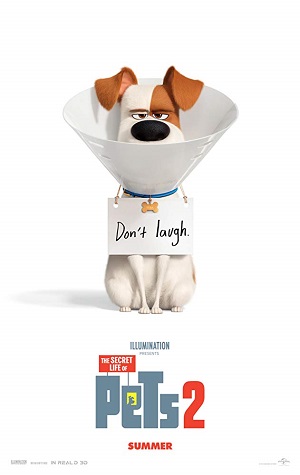