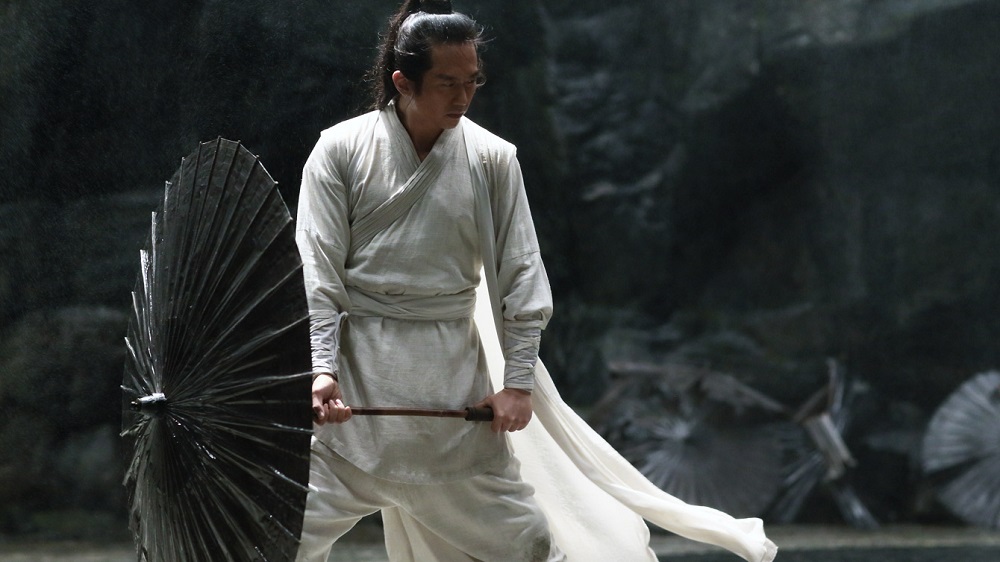 Two Chinese kingdoms are in the midst of an uneasy peace. The King of the Pei (Zheng Kai) has no wish for war. He is noticeably upset when his revered military leader Commander Yu (Deng Chao) returns from the city of Jingzhou, a former Pei stronghold that was won in battle by the ferocious General Yang (Hu Jun). Against the wishes of his King, Commander Yu has challenged General Yang to a duel, a fight between the two that could result in the two kingdoms returning to a state of conflict. For going against his wishes the King strips the Commander of his authority, rank and privilege, demoting him to the status of a commoner and exiling him from the castle.

But not all is as it seems. There is a plan afoot, and this version of Commander Yu is not the real one. He is instead nothing but a “shadow,” a duplicate raised from an early age to be every bit the person he has been chosen to impersonate in case circumstances arise forcing him to do so. The real Yu, critically wounded in battle against General Yang when Jingzhou initially fell, has been diligently training his imposter for just this moment. Aided by his dutiful wife (Sun Li) who has been instrumental in maintaining this deception, he has crafted a plan that will allow Pei to take back their lost city while at the same time leading to the usurping of the ineffectual King. It all relies upon the fake Yu being able to still convince General Yang to face him in one-on-one combat and his ability to hold his own against the unbeatable warrior long enough for the real attack to begin, the fate of an entire nation resting upon the courage, and the commitment, of a shadow whose fight this has never been.

After the box office and critical failure of Zhang Yimou’s first foray into Hollywood filmmaking The Great Wall, the acclaimed director of classics like Raise the Red Lantern, Ju Dou and The Story of Qiu Ju ventures back into the world of the wuxia epic with his latest drama Shadow. However, unlike Hero or House of Flying Daggers, this one is even more enigmatic, more ephemeral, existing in a constant state of grey where good and bad barely exist, a place where right and wrong have no meaning and finding a way to live with the repercussions of one’s decisions is all that ultimately matters. This is an angry movie that refuses to compromise, the level of mournful melancholy that permeates every cell of the narrative a quietly painful cry for understanding that tragically may never materialize.

There are many layers to this film. Each key character is attempting to play a psychological game against their adversaries, and like chess grandmasters they are constantly plotting out each move while also trying to anticipate how their adversaries will counter their attacks. However, at the center of all of these machinations doesn’t just sit Commander Yu’s shadow. The King’s sister Princess Qing Ping (Guan Xiaotong) is also caught up in the chaos, especially when her brother agrees to gift her to General Yang’s haughty son Ping (Leo Wu), not as his bride, but instead as a concubine. The decisions the Princess and the shadow end up making are vital to the outcome that both the King and the real Commander Yu are attempting to orchestrate from behind the scenes, and if either of them choose to go off the predetermined script than all they’re fighting for could be lost and General Yang will rise to become ruler of two kingdoms and not just one.

I need to be a little vague as to what happens next, as the machinations of the plots being hatched by the various protagonists are best left to be discovered by watching them play out inside the movie and not hinted in a review. But it is still safe to say that this is one of the more morally ambiguous motion pictures of Yimou’s storied career, concepts of heroism, courage and valor not meaning near as much as they have in his prior action spectacles. There is little in the way of honor for any of the characters trying to survive all of the carnage and bloodshed, revenge and recompence for both imagined and genuine wrongs almost more important than victory at the end of the day.

Not that Yimou still does not deliver a visual extravaganza that’s right up there with anything he has ever conjured up before, including the impressive gathering of forces sequence in Curse of the Golden Flower or the magnificent snow-covered final bout in House of Flying Daggers. He and frequent cinematographer Zhao Xiaoding (Riding Alone for Thousands of Miles) utilize production designer Kwong Wing Ma’s (Drug War) sets with spectacular aplomb, editor Zhou Xiaolin (When Larry Meets Mary) melding it all into a seamless series of eye-popping images the jump off the screen. The battle in Jingzhou is incredible, while the fight between General Yang and the shadow is well worth the wait.

It is all a little too cryptic for its own good every now and then, and for some reason Yimou turns away from the central action to focus on the secondary characters at rather strange moments that end up dulling the emotional magnitude of what is transpiring in Jingzhou once the battle begins. The climax is also strangely rushed, and I couldn’t help but wish the filmmaker had taken a little more time before bringing things to conclusion. Additionally, where things eventually end up isn’t that giant of a surprise, and at a certain point in the film it became clear to me there was really only one way for things to resolve themselves.

But I love the ethical uncertainty of this story, Kai, Chao, Xiaotong and Li all giving magnetically complex performances I found impossible to take my eyes off of. I was also thrilled by many of the central set pieces, their violently beauteous creativity and viciously gorgeous imagination nothing short of sublime. Shadow is a masterful spectacle of human frailty and intellectual dishonesty that only grows in resonance as it goes along, its haunting final image of a pained decision in the process of being made one that will stick with me for quite some time to come. 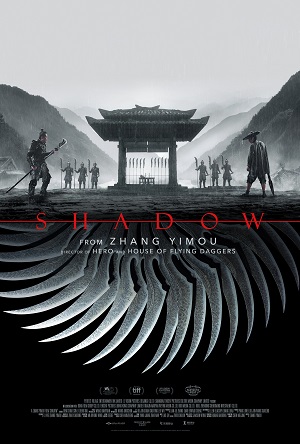