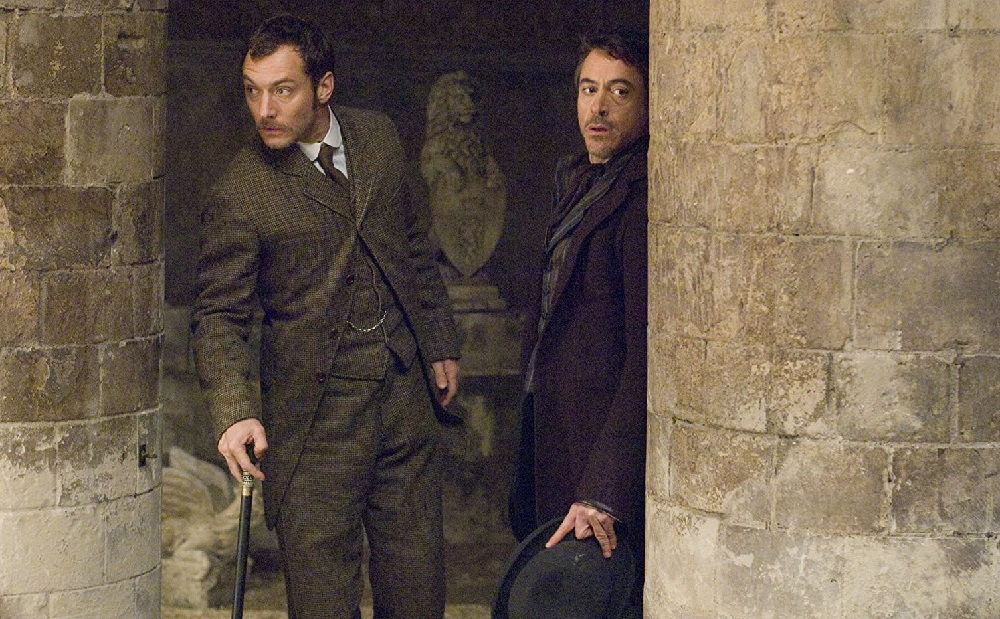 Here’s what I wrote about this one back in December of 2009:

“I’ll admit up front I was worried about director Guy Ritchie’s Sherlock Holmes. The trailers made it look like some sort of Victorian Pirates of the Caribbean knock-off, Sir Arthur Conan Doyle’s literary detective reduced to being just another comic book superhero quick-wittedly facing off against a banal series of supernatural bad guys.

Can I just say how delightful it is to have one’s preconceptions proven deliciously wrong? Not only is this new take on the iconic character a rollicking good time, the screenplay by newcomer Michael Robert Johnson, Anthony Peckham (Invictus) and Simon Kinberg (Jumper) is surprisingly literate. This movie somehow does Doyle proud, and unlike other revisionist takes on the detective gone wrong (like 1985’s Young Sherlock Holmes, which I pretty much adore until it goes disappointingly off-the-rails during the climax), this one gets so much right enjoying it is positively elementary.

It helps that someone, somewhere (and I’m guessing it was, of all people, producer Joel Silver) managed to reign in Ritchie’s hyperactive tendencies and force him to tell a cohesive tale. Mostly gone are the annoyingly flashy camera and editing tricks that marred recent efforts like Revolver and RocknRolla, In their place is a deliberate delicacy which allows for the plot to flesh itself out organically and at its own pace. For arguably the first time since Snatch the director lets his actors act, giving them space to craft three-dimensional characters that are intriguing and engaging and not one-note figures built out of nothing more than their own tiresome machismo.

The plot follows 221B Baker Street detective Holmes (Robert Downey, Jr.) and his trusted associate Dr. Watson (Jude Law) as they investigate the mysterious resurrection of the villainous Lord Blackwood (Mark Strong), a Machiavellian killer they originally helped send to the gallows. Making things interesting is the arrival of American thief Irene Adler (Rachel McAdams), the only person to ever best the sleuth at his own logical game. She’s also the only woman he’s ever fallen in love with. On top of that, Watson is on the verge of marriage himself, an event that puts the pair’s continued working relationship in serious jeopardy.

I will say that seeing Sherlock Holmes as a man of action is a bit disconcerting, his skill with martial arts a thing no other television or cinematic version has hinted at before. Still, Doyle’s books do suggest his detective isn’t incapable of standing up for himself physically, his knowledge of ancient Asian arts mentioned on multiple occasions. But for those who think Basil Rathbone or Jeremy Brett are the actors who inhabited this character best they will almost certainly have trouble with this depiction, Holmes’ efficiency with firearms and his fondness for fisticuffs items old-school purists might not appreciate.

Had the script not been so well constructed I probably would have been amongst those crying foul. Thankfully, Sherlock Holmes is an intelligent action movie, and for all the explosions and gunshots (of which there are too many to count), that the plot is reliant on its heroes using their brains to solve the crime reduced my general unease in regards to this interpretation of the character considerably. I love mysteries where the clues are all there for the audience to piece together, and while solving these riddles isn’t exactly difficult doing that doesn’t make doing so any less fun.

McAdams never registers as strongly as I’d have liked, and when Holmes’ greatest adversary (next to Professor Moriarty, of course) is ultimately reduced to a cliché cowering female I was understandably annoyed. There are also moments of extraneous exposition not involving the detective which slows things down noticeably, scenes of the conspirators hatching out their dastardly deeds adding little if anything substantive.

On the positive side of the equation, Downey is wonderful as Holmes, he and Law having playfully homoerotic chemistry that’s marvelous. Strong makes for a memorable bad guy, never overplaying his hand while keeping Blackwood an intriguing enigma throughout. As for the supporting players, both Eddie Marsan (as put-upon Scotland Yard Inspector Lestrade) and Kelly Reilly (as Watson’s prim fiancé Mary) make the most of their limited screen time, each leaving a far greater impression than I initially thought possible.

I enjoyed Ritchie’s Sherlock Holmes quite a bit. From Hans Zimmer’s (Frost/Nixon) superb score, to Philippe Rousselot’s (A River Runs Through It) enchanting cinematography, to Sarah Greenwood’s (The Soloist) eye-popping production design, everything here reeks of class. But it is the combination of the literately engaging script and the immersion of the actors into their iconic characters that makes this effort worthwhile, and if this is what it is going to be like for a new millennia game to be afoot here’s my vote Warner Bros keeps this case open for investigation for as long as they can.”

I enjoyed revisiting this one quite a bit. Next to Ritchie’s early work along with 2015’s The Man from U.N.C.L.E., this revisionist take on Sherlock Holmes is one of the director’s better films. Warner’s 4K presentation is pretty dang stunning, and I’m certainly happy to add this release to my personal library.

No special features are included on the 4K Ultra HD disc. All extras are contained on the previously released Blu-ray that is also included with this set.

Sherlock Holmes is one of Guy Ritchie’s better movies and is astonishingly easy to watch multiple times. Robert Downey Jr. and Jude Law are a terrific team, while the comedy, mystery and action elements meld rather nicely for the majority of the picture’s 128-minute running time. Lack of any new extras notwithstanding, this 4K Ultra HD release is very strong, and I imagine fans will be excited to add this one to their collections. 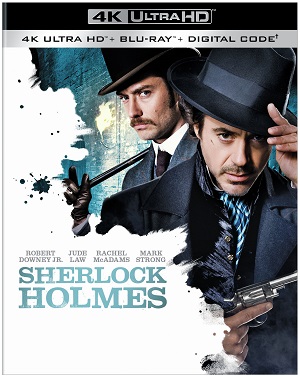