Gory Horror-Comedy Slaxx Worth Trying On for Size

Libby (Romane Denis) is dizzily excited about her first day working for Canadian Cotton Clothiers (CCC). The company has built its reputation on clean business practices and the promotion of healthy living, stating proudly they want their employees and fans to all “make a better tomorrow today.”

But the line between the private reality and the public company line couldn’t be more different. Libby gets the feeling that her fellow employees, especially store manager Craig (Brett Donahue), don’t hold to founder Harold Landsgrove’s (Stephen Bogaert) purported altruistic ideals near as much as she does. Worse, as her first night goes on, she’s starting to think the company itself is as capitalistically soulless and as self-centeredly niggling as the majority of her coworkers appear to be.

That’s the dry satirical stuff that makes up the foundation of Slaxx, a carnivorous horror-comedy sprung from the inventively warped minds of director Elza Kephart and co-writer Patricia Gomez. While the base of their narrative makes a handful of salient (if also all-too-obvious) points about corporate policies that don’t exactly put people above profits, the reason viewers might get excited about watching is far more gruesomely disreputable.

What did I leave out of that synopsis? The reason Libby and her entire CCC location’s crew are working overnight is that they are the only location unveiling the company’s highly touted new jeans for the upcoming season. They’re form-fitting and are reported to make any and every body type, no matter the gender, look like they have the perfect derriere. There’s just one problem: these jeans literally eat people.

It’s as silly as it sounds, and Kephart and Gomez pull out all the stops as they showcase their sentient legwear chomping down on CCC employees one at a time. The first kill is especially grisly, both because of how giddily gory it is and also thanks to how terrifyingly relatable the situation the victim finds herself in. It’s nasty in all the right ways, and the filmmakers maintain a consistent tone of comedic karmic menace that happily kept a horrified smile on my face from first dismemberment to the last.

Denis is a good wide-eyed heroine, infusing Libby with an aura of angry resolve as her illusions of the company she works for are shattered bit-by-bit and the truth behind the jean’s killing spree is slowly revealed. She also has sublime rapport with Sehar Bhojani (portraying seemingly the only store employee who isn’t either a venal plastic consumerist mannequin or an insensitive corporate stooge), the two forging an authentically sincere connection I could relate to.

Unlike Peter Strickland’s magnificent In Fabric, also about seemingly sentient clothing that destroys anyone who wears it, Kephart and Gomez aren’t entirely successful in making all of their social and political points. While they do hit the majority of their satirical targets, their commentary is equally heavy-handed. This keeps the pair from sticking the landing, and the climax to their film slightly underwhelms because of this.

Thankfully, the stuff that works does so nicely. The makeup effects are top-notch. The creativity of the kills is undeniable. The comedic quirkiness of the scenario is consistently amusing yet also still treated with admirable seriousness by the entire cast. Donahue is a suitably hissable villain, and Erica Anderson makes a memorable impression as a self-possessed online influencer invited to the store for a sneak preview of the jeans.

While not a perfect fit, Slaxx slays, and I can’t wait to size it up again sometime soon. 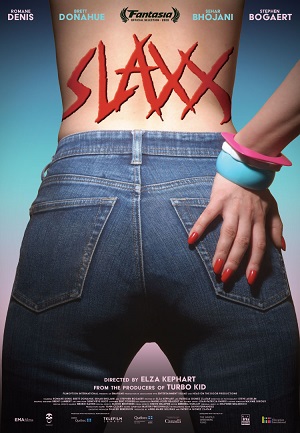