Pixar’s Soul has a lot on its mind. Inside Out and Monsters, Inc. impresario Pete Docter has delivered a meditative animated comedy centered upon complex, whimsically multidimensional ideas that frequently caught me by surprise. Cowriting the script with Mike Jones (EvenHand) and Kemp Powers (One Night in Miami), Docter’s story overflows with childlike imagination yet still revels in dissecting adult issues involving identity, self, aging, family and community with gracefully empathetic aplomb.

So why am I not doing enthusiastic cartwheels over this one the same way I have for so many other Pixar successes? I’m not entirely sure. I liked Soul. It’s very good and features the year’s best score, a creative jazz-infused sonic soundscape composed and arranged by Trent Reznor, Atticus Ross and Jonathan Batiste that’s magnificent. But even with that being the case I still can’t quite embrace the film with both arms. Something about it keeps me at a distance, and after watching it twice I’m still not 100% certain I know exactly why that is.

On the day part-time middle school band teacher and jazz pianist Joe Gardner (voiced by Jamie Foxx) is offered a full-time position, thanks to one of his former students he also lucks into auditioning for legendary vocalist Dorothea Williams (Angela Bassett). Impressed with the educator’s skills tickling the ivories, she gives him the chance to perform with her and her band while they’re in New York. For Joe, it is a dream come true, so many years of hard work seemingly about to pay off.

But with his head in the clouds and not on where he is going, Joe stumbles face-first into calamity. With his comatose body in the hospital, the teacher’s soul heads straight for the hereafter. But instead of going to the Great Beyond Joe makes a frantic U-turn and ends up in the Great Before, a playful way station for new souls trying to figure out their various personality traits before being born back down on Earth.

Confused? Don’t be. Docter and company do a fine job fleshing out their scenario and establishing the various rules souls have to follow both entering and exiting the earthly plane. The short version is that Joe has no wish to die and is willing to do whatever he can to return to his body so he can play that gig with Dorothea. In his pursuit to make this happen, he is tasked with mentoring 22 (Tina Fey), a wayward soul who’d rather remain in the Great Before instead of going through the turmoil of being born living a human life.

In typical Pixar fashion, a lot of imaginative hijinks involving the pair ensues, including both Joe and 22 ending up down on Earth only with the young soul in his former body while he’s forced inside the skin of a fluffy kitty. The pair run around New York trying to return 22 to the Great Before and the pianist back to his own body so he can perform with Dorothea. Along the way they learn several lessons about what it means to live a rich, fulfilling life, finding that metaphorical spark within that makes every experience, good, bad and in-between, worth having.

It’s a lovely story, and I adored the lessons both Joe and 22 ended up taking to heart. I also appreciated many of the quieter moments, ones where Docter gets to show his artistic genius; and his obvious affection for these characters and what they are going through is never in question. There is a goofy idiosyncratic charm to the Great Before that’s magical, and I likely spent at least half of the film’s 100-minute running time happily giggling in tearful joy.

So what’s the problem? Unlike Inside Out, there is an odd binary finality to Soul that for whatever reason rubbed me the wrong way. Everything tends to be an either/or proposition, giving things a rudimentary gender-coded irrevocability that doesn’t feel nearly as well thought out or as craftily developed as one expects from a filmmaker as talented as Docter. Also, while I do not believe I am the person to go into this in detail, the fact Foxx barely spends even a quarter of the picture inhabiting Joe’s body and instead spends almost all of it either inside a cat or bopping around the screen as a squishy blue wraith was a little weird to me. It just didn’t sit right.

These misgivings aside, Docter’s latest is still pretty terrific. There’s marvelous supporting work from Phylicia Rashad as Joe’s seamstress mother Libba, while an entire set piece set at a local barbershop is outstanding. Foxx and Fey have luminous chemistry, while a running gag regarding all of the Great Before counselors being named “Jerry” is far more consistently amusing than it has any right to be. Most of all, Soul ends on the perfect note, its last moments overflowing in voluminous human insights so melodious I could happily hum its climactic tune for a lifetime and likely never grow tired of hearing it. 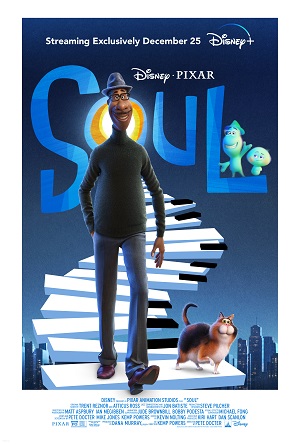