There is a breathless sonic majesty to Darius Marder’s superb Sound of Metal that left me a discombobulated mess long after the drama had ended. This is a powerful story of human loss, acceptance and understanding that moves in increasingly personal ways as things build to their suitably ephemeral conclusion. Featuring a volcanic performance from star Riz Ahmed that’s one of 2020’s best and a supporting turn from veteran character actor Paul Raci which caught me entirely by surprise, Marder’s narrative debut knocked my socks off.

During a series of packed one-night shows, talented heavy-metal drummer Ruben (Ahmed) comes to a terrifying discovery. He’s losing his hearing. Bandmate, lead singer and girlfriend Lou (Olivia Cooke) is crushed when he finally breaks down and tells her the news. Fearing the former heroin addict may relapse, she throws herself into research and discovers a secluded sober house for the deaf run by the kindly if firm Joe (Raci).

As simple and melodramatically straightforward as that synopsis may be, Marder’s feature-length debut is nonetheless a character-driven marvel where human frailty and communal selflessness can walk hand-in-hand at any given moment. Ruben may agree to stay at the sober house, while he does throw himself into learning sign language and discovers how to make his way in the world without his hearing, that does not mean he still isn’t selfish, still isn’t pining for his own material needs even if he’s not entirely sure why he is still doing so.

Marder reunited with his The Place Beyond the Pines bandmate Derek Cianfrance to come up with the story and composed the screenplay with his brother Abraham Marder, and the trio’s attention to detail as to the finer points of their scenario is exquisite. This film has a lived-in quality that shouts volumes even when no one on the screen can hear anything that’s going on.

Scenes at the sober house dinner table are raucous and uninhibited. Another moment between Ruben and a deaf youngster in a schoolyard communicating via the percussive reverberations of a playground slide had me on the verge of tears. The maniacal beauty of these and several other sequences enthralled me body and soul, the simple, unvarnished authenticity of each scene undeniable.

Another of this drama’s primary assets is its unquestionably bold and innovative sound design. Conceived by the director and executed by veteran sound designer and co-composer Nicolas Becker, the audio landscape is unlike anything I believe I have ever experienced before. The way sound is transmitted throughout forced me as a viewer to experience as best I could the debilitating and terrifying confluence of events that were initially sending Ruben on his downward spiral. It’s unnervingly heartbreaking.

This slowly gives way to an entirely new world of sensory mysteries and experiences which force the drummer to see the world through new eyes. As he makes friends with Joe, his fellow housemates and with the kids and teachers at a school for the deaf, Ruben starts to find different ways to interact with the world around him, all of it augmented with an ingeniously bedeviling soundscape that smothered me whole.

Ahmed is a fine actor who has given several noteworthy performances in a wide variety of motion pictures ranging from The Reluctant Fundamentalist to Nightcrawler to Rogue One: A Star Wars Story to The Sisters Brothers. Even so, this is the best I’ve seen him by a good country mile. He disappears into his role, vanishing so completely I almost expected to find an album featuring Ruben and Lou’s band on Spotify as if they were a real heavy metal duo and not a figment of Marder’s imagination. Ahmed’s hostile physicality melds seamlessly with his raw emotional vulnerability, and even if the rest of the movie were an outright disaster, it’s still likely I’d be urging curious viewers to give it a look due to his presence alone.

Thankfully this is not the case. While a bit disjointed in how it navigates its way into its final act, Sound of Metal is nonetheless one of the more uniquely memorable cinematic experiences of 2020. It is a feast for the senses and features the type of universally personal story I always hope to see more of yet so seldom do. Marder steps behind the camera and delivers a debut that will be remembered for years to come, the sound of its cacophonous silence as it reveals new layers of human understanding practically deafening. 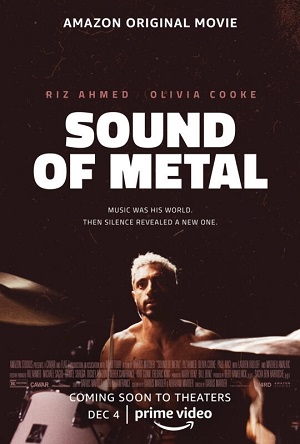