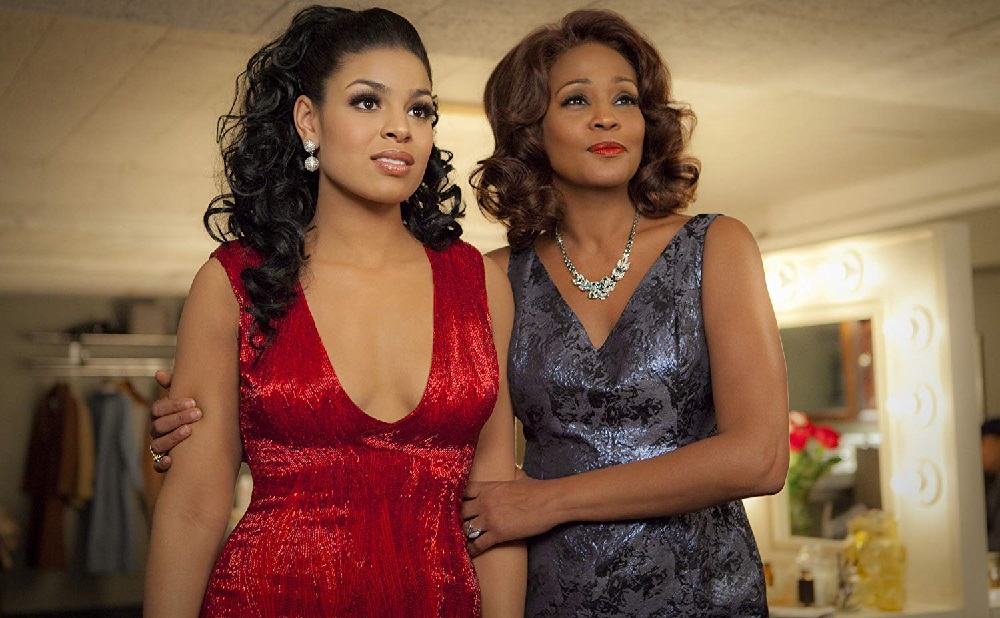 Dim Sparkle Hopelessly Out of Tune

Sparkle (Jordan Sparks) lives with her two older siblings Sister (Carmen Ejogo) and Dolores (Tika Sumpter) in their domineering, church-going mother Emma’s (Whitney Huston) spacious Detroit home. It is 1968, and the Motown movement is sweeping the country. A bourgeoning songwriter, Sparkle convinces Sister to sing one of her songs during a club’s open mic competition, the pair attracting the attention of music producer Stix (Derek Luke).

Ultimately Stix persuades all three ladies to form a group with Sister as the lead and Sparkle responsible for writing the songs. Quickly the trio’s star is on the rise, the young women catching the eye of a Columbia Records executive (Curtis Armstrong). But Sister has also engendered the affections of comedian Satin Struthers (Mike Epps), their abusively destructive relationship having the potential to bring down the group and destroy Sparkle’s dreams of musical stardom before they even achieve liftoff.

A remake of the 1976 musical starring Irene Cara and Philip Michael Thomas, director Salim Akil (Jumping the Broom) and his screenwriter wife Mara Brock Akil (“The Game”) have transported their version of Sparkle even further back in time, setting their story right in the middle of the Motown explosion. Musically this was a wise idea, their film filled with pulsating rhythms and sounds that make the body enthusiastically move and groove even while sitting quietly in a darkened theatre.

This might have been the only good idea the pair had. Dramatically and structurally, this remake is a mess, the film going the Dreamgirls meets A Star is Born route but never in a way that feels fresh or imaginative. Sparkle is a turgid slog of clichés, facile melodrama and missed opportunities. Even with a couple of show-stopping musical moments, this is still a nearly two-hour mess that left me feeling bruised, battered and bludgeoned, and the glorious soundtrack aside there was hardly a single part of it I ended up enjoying.

I might be overstating things slightly. A subplot involving Sister and Satin, while trite and unoriginal, is acted with passion by Ejogo and Epps, their scenes delivered with an electricity of purpose the majority of the picture sadly lacks. The pair throw themselves into their respective characters’ self-destructive pursuits with conviction, making their tragedy to come at least somewhat compelling by their doing so.

But I’ve seen pretty much all of this story a billion times before. Worse, I’ve seen it told a heck of a lot better. The price of stardom. The tragedy of abusive relationships. The pain and suffering of addiction. The heartbreak and bitter aftertaste of dreams left unfulfilled. All of this is present; none of it is interesting. The Akils present this story with a turgid dogmatism that’s close to insulting, continually slapping the viewer across the face when a subtle caress would have been a heck of a lot more powerful. In the end time, circumstance, character and continuity having no apparent meaning, events leading to a foregone conclusion that’s as rousing as an “American Idol” finale.

I bring up “American Idol” for a reason, not because Jordan Sparks was the sixth season winner (making comparisons to Academy Award-winning season four also-ran Jennifer Hudson practically inevitable), but because of the way the final concert is shot, executed and staged. Did anyone at all think to themselves that less in the case of Sparkle’s triumphant moment might be more? Were there conversations that going over the top with a lot of unnecessary theatrics might call attention away from the innate power of the moment and instead bring back memories of Sparks beating out Blake Lewis for the long-running reality television show’s 2007 crown?

If there were, nobody listened, which is unfortunate because the pieces for a reasonably entertaining motion picture do exist. No one gives a bad performance, all of the actors, including Sparks, delivering their lines with conviction. But there is no pulling restraint or subtlety as far as the bigger picture is concerned. The volume is pushed way past 11 to an ear-shattering decibel that amplifies the film’s maudlin mediocrity, and even the one or two quiet moments with the potential to emotionally resonate vanish into this sonically maddening ether with frustrating abruptness.

Sparkle will be talked about more because of Huston than it will for anything else, her recent death unquestionably going to be the center of any conversation that ends up happening about the film. What I will say is that while her performance as a bitter mother desperately trying to keep her daughters from repeating her own mistakes isn’t an embarrassment, I also can’t say she makes a particularly memorable impression. While Huston’s death was an undeniable tragedy, that doesn’t make this movie any less pedestrian, and while I’ll happily enjoy the singer’s music far into the foreseeable future, here’s hoping I don’t have to think about this film or her involvement in it ever again. 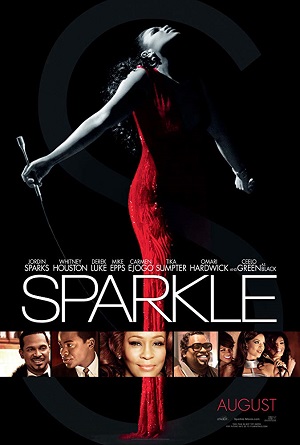