He swings through the air with the greatest of ease, but he isn’t the man on the flying trapeze. He knows if you’ve been bad or good, but he’s certainly no Santa Clause. And while seemingly leaping tall buildings in single bounds, there isn’t a giant “S” emblazoned upon his chest (although both he and Superman do share a few of the same letters of the alphabet in common).

As superheroes and cultural phenomena go, your friendly neighborhood Spider-Man isn’t the most extroverted guy in the world. At heart he wants to be like everyone else – a regular guy free of his superpowers and with no more responsibility other than living his life day-to-day best as he can.

Why? Being a superhero doesn’t just put a giant crimp in someone’s personal life, it comes perilously close to destroying it. In the years since mild-mannered Peter Parker (Tobey Maguire) was bitten by a radioactive spider, all the things the young man once considered most important are now suffering. His friendship with Harry Osborn (James Franco) has been fractured. His Aunt May (Rosemary Harris) is worried about her nephew’s increasingly erratic behavior. His schoolwork isn’t up to snuff.

But it is his relationship – are rather the lack of one – with Mary Jane Watson (Kirsten Dunst) that has Peter most distressed, especially now that’s she’s engaged to marry a moonwalking astronaut and bona fide national hero. It’s all bringing him down, and as much as he loves righting wrongs and doing good deeds as Spider-Man, part of Peter wonders what it would be like if he could throw his mask in the trash and forget about it forever.

Some things cannot be. Harry still holds Spidey responsible for the death of his father. He enters into an agreement with the deranged – if brilliant – Dr. Otto Octavius (Alfred Molina) to see the masked hero dead. The revered former scientist was the victim of his own hubris, his body fused to four indestructible metal arms and his wife Rosalie (Donna Murphy) tragically killed in a fusion experiment gone haywire. Now he’ll put all of New York at risk to complete his experiment, and if getting all the materials he needs to do it means standing over Spider-Man’s corpse with Harry, so be it.

What’s amazing isn’t that Sam Raimi’s follow-up to his 2002 smash is a lot of fun, but instead that it might just be the greatest superhero comic book adventure film I’ve frankly ever seen. Spider-Man 2 is superb. It is thrilling on every level, overflowing in sights and sounds that held me contentedly spellbound. Raimi and screenwriter Alvin Sargent, working from a story crafted by a team of additional writers including Pulitzer-Prize winning novelist Michael Chabon, have delivered a spectacular entertainment that exceeds expectation on every conceivable level.

Not that a lot of this is new, per se. Sargent and company crib freely from Superman 2, Batman Returns and the X-Men series. Yet do not mistake any of this as plagiarism. Raimi imbues events with a whimsical pathos that, while blatantly melodramatic, still never fails to be anything other than spellbinding.

But there are some notable exceptions to the narrative familiarity. Just when I thought I could foresee every twist and turn, Raimi and his team unleashed a torrent of surprises, almost all of them in the final act, and each of which kept me on my toes trying not to get a crick in my neck from the energetically boisterous whiplash.

It is the focus on Otto Octavius that makes all of this work. Raimi places him front and center, juxtaposing his devolution into a villain with Peter’s difficulty in being a hero. The filmmaker allows this to be a character study on interpersonal growth instead of the boringly routine razzle-dazzle smorgasbord too many modern action epics make their bread and butter. Maguire and Molina touch all-too-real human experiences to make their characters resonate. Otto and Peter are authentically believable in all the ways that matter most, and I found it impossible not to be touched when their paths started going in wildly divergent directions.

Not that Raimi skimps on any of that razzle or forgets about dazzling his audience. Spider-Man’s flights through the New York cityscapes are mind-blowing. Even better is a balls-to-the-wall brawl between Spidey and Octavius that takes them from the tops of buildings to the city streets before culminating on the roof of an elevated train. It is a kinetically thrilling sequence, easily the best pure action moment I’ve seen in years, and arguably the greatest villain-superhero smackdown since Superman and General Zod demolished Metropolis.

So where does Spider-Man 2 rate in the pantheon of superhero films? Right near the top. From Superman to Batman to X-Men and even to Blade, filmmakers seem to find themselves freed from all prior constraints where it comes to the second chapter. This goes for Raimi and his creative team. They’ve spun a winning web, all of them taking Spider-Man to new heights beyond all imagining. 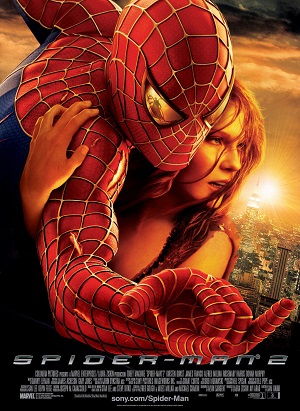