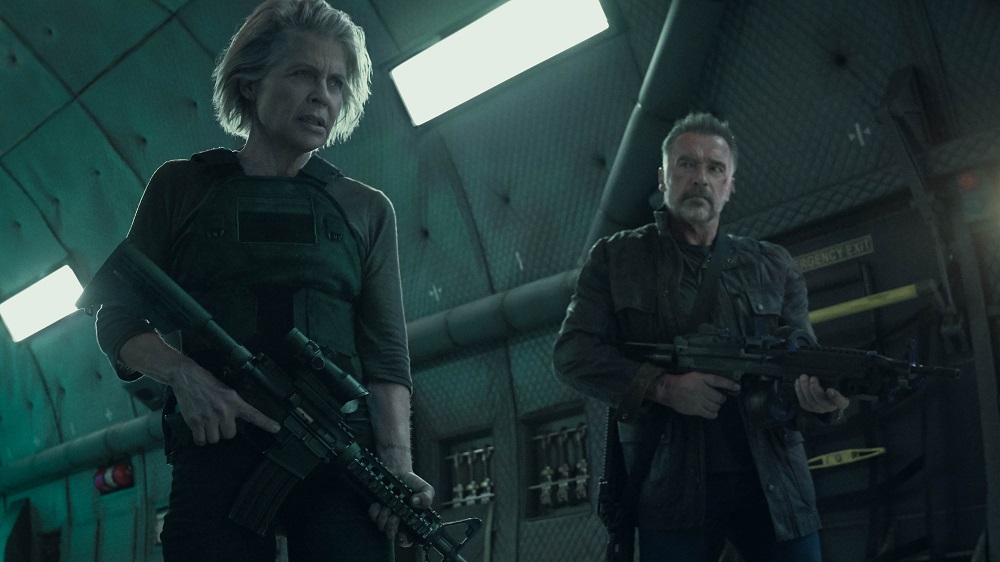 The Terminator franchise has seen plenty of iterations, reboots and attempts at reengineering after creator James Cameron left in box office glory and Oscar-winning triumph following the success of 1991’s Terminator 2: Judgment Day. Direct sequel Terminator 3: Rise of the Machines, the film Linda Hamilton famously declined to return for resulting in her character Sarah Connor being killed off, didn’t make a lot of people happy. Neither did 2009’s prequel/sequel hybrid Terminator Salvation with Christian Bale assuming the mantle of future hero John Connor with a grumpy assertiveness few found appealing. Fox’s short-lived television series “The Sarah Connor Chronicles” with Lena Heady taking over for Hamilton did meet with moderate critical and cult success, but the expense of the show and its meager ratings did not work in its favor and the network canceled it after two short seasons.  As for 2015’s full-on reboot Terminator Genisys, the less we say about that debacle the better, and after its failure it seemed like this series had finally run out of gas.

Not so fast. Cameron returns to produce, oversee and co-write the story of Terminator: Dark Fate, the filmmaker taking more direct control in order reinject life into the franchise. Taking place some two-plus decades after the events of Terminator 2: Judgment Day, the film disregards the other sequels and reboots and instead posits a reason for Sarah Connor, once again portrayed by Hamilton in all her chiseled, magnetically ferocious glory, to still be hunting Terminators before they have the chance to end humanity. Weary and cynical, her curiosity is piqued when she heads to Mexico and ends up helping save the life of Danielle “Dani” Ramos (Natalia Reyes), a spunky twenty-something being protected by the iron-willed and curiously strong Grace (Mackenzie Davis).

Turns out, Sarah and her son John didn’t so much stop Judgment Day as they instead splintered the future into an entirely new direction where a different sort of artificial intelligence would also try to bring about humanity’s demise. For reasons Grace doesn’t want to divulge, these new machines want Dani dead, and like they’ve done before they’ve sent back in time a Terminator, this one known as a “Rev-9” (Gabriel Luna), to do the job. But this robot is unlike any Sarah has ever encountered, and killing it will take all three women working in tandem to get the job done. Even then they’ll likely need additional help of the futuristic robotic variety. But with all of the older Terminators, especially those pesky T-800s (Arnold Schwarzenegger) that were programmed to initially kill Sarah and her son John out of action, the likelihood they’ll find any assistance of that type is slim.

It’s not difficult to put the pieces of this science fiction action spectacle together. With something like six credited writers working on either the initial story or the finished screenplay (or both), this latest iteration of the Terminator timeline follows in the footsteps of Cameron’s first two films with lackadaisical conviction. While there are some creative touches, most notably in regards to Grace’s connection to Dani and how Schwarzenegger’s T-800 can return for another cybernetic smackdown, I still can’t say there are a heck of a lot of surprises. I pretty much knew what was going to happen for the majority of the movie’s two or so hours, the suspense I felt wondering who was going to live and who was going to end up terminated rather minimal.

Cameron and his hand-picked director Tim Miller (Deadpool) still reinject life back into this moribund franchise. They’ve crafted a wily, spiritedly energetic heroine in Dani and given the talented Reyes a fair amount of room to breathe life into her. Even if the reasons behind her being the latest target of a future technology’s ire (instead of Skynet humanity is now under assault from an even more bloodthirsty A.I. nicknamed Legion) are easy to suss out long before the film’s climax, I still found this young woman worthy of my emotional investment. Reyes gives her a three-dimensional edge I was drawn to, and I liked that compassion and understanding were key elements of Dani’s personality, making her a dynamic presence the filmmakers rightly make the most out of.

Granted, issues of identity, empowerment and representation aside (this film touches on a lot of hot-button topics including gender inequality and immigration, but really only does so to move the plot forward and not to make any big statements or engage in social commentary), the draw for many viewers interested in seeing this sequel will be the return of Hamilton. The actress does not disappoint. She’s as ferocious as ever as Sarah Connor, and to say the series has missed her is a massive understatement. But as good as she is it isn’t like the film does anything ambitious with her. Still, it’s nice to have Hamilton back, and I for one am not about to minimize just how much gravitas her presence adds to the material.

Davis is also excellent, and I liked a lot of the byplay that passes between Grace and Sarah as they wearily assess one another before coming to the mutual realization that they need to work together to defeat the Rev-9. Schwarzenegger also seems to be having a great deal of fun, and even though his reason for being around isn’t all that different than the ploy utilized to have an older T-800 in Terminator Genisys, he still brings a touch of grizzled whimsy to the motion picture that’s welcome. As for Luna, the actor does what he can as the unstoppable Rev-9, the film granting him a few eccentric character beats I found agreeably amusing. But he still can’t elevate the robotic assassin to the same terrifying plateau Schwarzenegger did with such ease back in 1984 and which Robert Patrick virtually matched in the 1991sequel, all of which makes his Rev-9 a far less threatening opponent for Sarah, Grace and Dani to deal with than he probably should have been.

This is still a step in the right direction for the franchise. I say that with zero hesitation. Miller handles most of the action with confident skill, the best sequences (like the requisite thundering car chase that is a signature of this series or the climactic showdown between the group and the Rev-9 inside the electrical works of a massive dam) the ones that feature more practical effects than they do digital ones. I also appreciate that the filmmakers keep things simple, never trying to overcomplicate matters and work to keep the plot moving in a relatively straightforward, character-driven manner reminiscent of the first two films (and to a lesser extent Terminator 3: Rise of the Machines).

Is that all enough to make the Terminator series viable going forward? I honestly don’t know the answer to that. Cameron’s return has helped re-stabilize things somewhat, and having Hamilton back certainly doesn’t hurt. Reyes is a strong actress and Dani is a terrific new character, and I’m undeniably intrigued to see what might happen to her next. But I also can’t stop from feeling that there aren’t a lot of variations to this scenario for writers to come up with at this point, and this film’s Rev-9 is still just part three’s T-X which was at that time part two’s T-1000, and at this point I’m not sure a new robotic assassin sent from the future to rewrite the present is going to get me excited. Still, Terminator: Dark Fate is a well-made action film many are going to enjoy, which likely means Sarah Connor will be back busting cybernetic heads before any of us know it. 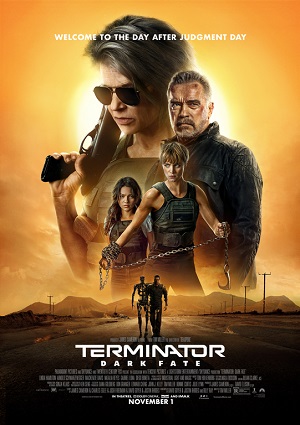