There is one thing to know about Top Gun: Maverick up front and that’s that — exactly like its Reagan-era, slickly produced predecessor — this legacy sequel is also an unabashedly jingoistic, feature-length commercial for the US Navy. It’s propaganda, pure and simple, and would not exist without the full-throated support of the military establishment granting the filmmakers access to aircraft, weaponry, and machinery they never would have seen, touched, or utilized without Pentagon approval.

With that out of the way, here’s the other thing I’m going to make crystal clear: Top Gun: Maverick is almost certainly one of the best films I’m going to see this year. Director Joseph Kosinski (Oblivion, TRON: Legacy), producer-star Tom Cruise, and the sequel’s quintet of writers — including Cruise’s Jack Reacher and frequent Mission: Impossible series collaborator Christopher McQuarrie — have done the unimaginable. They have collectively delivered an extraordinary, one-of-a-kind, eye-popping cinematic experience. This is big-budget Hollywood sensationalism of the first degree that will almost certainly have audiences hooting, hollering, and returning to the theater multiple times.

This isn’t nostalgia for nostalgia’s sake. Much like 1986’s The Color of Money (which just so happened to feature Cruise in a breakthrough performance and came out the same year as the original Top Gun) supplied a scenario worthy of the return of The Hustler’s main character, “Fast Eddie” Felson, the same can be said about how this script brings back Capt. Pete “Maverick” Mitchell for a second adventure. It is immediately clear that, chiseled bod and cocksure smile notwithstanding, this seasoned Navy aviator has felt the full weight of the past three-plus decades since viewers last saw him.

And what is a now-fiftysomething Maverick up to? He’s a military test pilot working on a top-secret project. But when belligerent Rear Admiral Chester “Hammer” Cain (Ed Harris) wants to shut the program down for taking too long to reach its goals, Maverick goes rogue to ensure that funding continues and those working on the project keep their jobs.

Normally, this stunt would be enough for someone as powerful as Cain to finally kick the rule-breaking pilot out of the Navy. Only he can’t. World events have conspired in Maverick’s favor. Under urgent orders of Tom “Iceman’” Kazansky (Val Kilmer) — now admiral of the Pacific fleet — the pilot must go back to the one place in the world he never thought he’d ever return: the Fighter Weapons School at Naval Air Station Miramar, in California, otherwise known as “Top Gun.”

It’s all fairly standard stuff, and it’s not like the screenplay goes in a single unexpected direction. Maverick is required to train several hot-shot pilots for a secret assignment, and Iceman believes his former wingman is the only person for the job. Among the diverse group of aviators he must pick through for this potential suicide mission is Lt. Bradley “Rooster” Bradshaw (Miles Teller), the son of his best friend, Lt. Nick “Goose” Bradshaw (Anthony Edwards), tragically killed back when they were both Top Gun scholars over three decades prior.

There are a variety of reasons this all ends up being pretty great, not the least of which are the stunning visuals and the thrillingly immersive sound design. Kosinski places the entire cast right inside the cockpits of the planes their characters are flying, with ace cinematographer Claudio Miranda (Life of Pi) doing things with his camera that defy belief. While there is some digital augmentation here and there, by and large, the aerial footage is real. Better yet, it shows, and outside of actually getting to sit in the backseat of an F-18, I doubt even a deluxe virtual-reality simulator could achieve the type of you-are-there euphoria of flight this film does.

But that would not matter if this weren’t a multidimensional melodrama where the characters come first and the razzle-dazzle second. Not that Kosinski and the writers are crafting some sort of Unforgiven-style deconstruction of the military drama — that isn’t the case at all. Instead, they’ve drawn inspiration from WWII-era classics like Air Force and Thirty Seconds Over Tokyo, grounding their ensemble in authentic human emotions and giving them inner lives beyond what happens to them in the cockpit.

Does it all work? No. While Jennifer Connelly is wonderful and has exquisite chemistry with Cruise, and while fans of the original will love the surprise of which character she is portraying, her entire arc feels more in service of helping Maverick find himself than it is in giving the character her own agency. Additionally, there’s an undeniably silly homage to Star Wars smack-dab in the middle, when the mechanics of the secret mission the pilots are training for is finally described to them. I laughed during the entire sequence. And I was far from the only one.

Not that I care. I sat in the theater in a constant state of dazzled euphoria. I shed tears when I was supposed to, I cheered during the final aerial battle, and I maybe even let out a series of low-level, giddy chuckles during a few of the cornier bits connecting the original film to this one. Cruise refuses to phone it in, delivering a superb performance full of raw honesty and emotional nuance that took me completely by surprise.

I loved Top Gun: Maverick. This sequel hasn’t lost that loving feeling. It’s the best of the best, making this return flight to the danger zone a rapturous aerial extravaganza that frankly took my breath away. 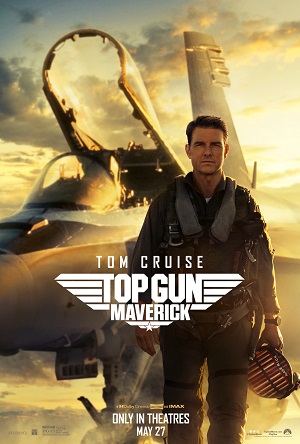