Pretty certain I have walked into every Toy Story sequel wondering what the creative impetus was for the team at Pixar to be crafting another tale about sentient toys Cowboy Woody (voiced by Tom Hanks), Buzz Lightyear (Tim Allen) and all the rest of the gang littering the floor of their owner Andy’s bedroom. I knew what the financial reason was, parent company Walt Disney Pictures not exactly shy about beating a franchise into the ground if it will continue to pay off for them at the box office. But what could the scenario be? Where could these characters go? What could the filmmakers do that could possibly equal or surpass what it was they had already accomplished?

In the case of 1999’s Toy Story 2 and especially with 2010’s Toy Story 3, an Academy Award-nominee for Best Picture, the gang at Pixar surpassed expectations. They picked up each story equal to the number of years that had passed between installments, and in doing so crafted a magnetic picture of what it is like for parents and loved ones as they watch children slowly mature into adulthood. The filmmakers examined various themes relating to friendship, loss, heartbreak, love, loyalty, loneliness and most of all family, and when taken together as a singular whole this initial trilogy is close to flawless.

All of which makes the gorgeously animated Toy Story 4 feel as if it were made solely just to make Disney boatloads of cash and not for any artistic reason that is easy to surmise. And yet, even if the film is guaranteed to be a massive hit, goodness gracious if the storytellers and animators at Pixar have done it once again. The first entry of the franchise to pick up immediately after the events of its predecessor, this sequel is marvelous. Once again this is a story about friendship and family, elegantly becoming so much more than that as things progress, becoming a profound treatise on identity, self-expression and community. Walking out of the theatre afterwards I knew for certain I just watched one of the best motion pictures I’d see in all of 2019.

It’s been about a year since Andy (John Morris) gave his most prized toys, including Woody and Buzz, to Bonnie (Madeleine McGraw) as was heading off to college. It is now her first day of kindergarten, and her fear is palpable. Woody feels it is necessary one of them goes with her to lend moral support. Bonnie’s favorite toy Dolly (Bonnie Hunt) disagrees and thinks they should listen to their kid’s parents and stay at home. But Woody goes anyway, and while there he secretly helps her engage her creative faculties to complete her first class project. Utilizing a spork, some glue, a few twist ties and a handful of other various items Bonnie manufactures Forky (Tony Hale), and in that exact moment he becomes her most prized possession.

Problem is, Forky doesn’t believe he can be a toy. He wants to be in the trash. Woody is insistent that he must be protected, that his importance to Bonnie is so extreme it is now his and the rest of her toys’ collective mission to make Forky understand just what it means to be loved by a child and not allow him to jump in the garbage can. But while on a family road trip the garbage-loving spork leaps out of the vehicle into the night. Instructing Buzz and the others to cover for them both until he can meet back up with them in the morning at the RV park, Woody goes after Forky, and on the road into town convinces the kindergartner invented toy to embrace his newfound existence.

After a brief prologue, this is roughly the first 15 minutes of Toy Story 4, and all of it is inventive and fun if still not exactly mind-blowing. But things turn on a dime the moment Forky and Woody reach the small town and the RV park, the cowboy doll sidetracked by an antique store showcasing an old friend’s ceramic lamp in its window. From there things move in increasingly complex dimensions. Bo Peep (Annie Potts) returns, while new characters like the unnerving Gaby Gaby (Christina Hendricks), her cadre of creepy ventriloquist dummies, Canadian motorcycle stuntman Duke Caboom (Keanu Reeves) and sowed-together-at-the-wrist stuffed animals Bunny (Jordan Peele) and Ducky (Keegan-Michael Key) are all introduced. It’s all very exciting, funny, moving and tenderly astute, events building to a fabulously euphoric climax that had me crushing an entire package of tissues while it brought a smile to my face and brought Woody’s four-film saga to an unforgettably rapturous conclusion.

There is something meaningful going on here. Director Josh Cooley and the film’s cavalcade of writers (eight are listed with coming up with the story, while Pixar veteran Andrew Stanton and franchise newcomer Stephany Folsom are credited with the finished screenplay) have really gone out of their way to craft a story that is chockfull of delicious insights and nuances that passionately speak to all viewers, young and old alike. It is a richly rewarding saga of the difficulties of change and how debilitating not knowing what one’s purpose in life is, especially if one is uncomfortable in their own skin and has no idea if the image they’re presenting to the world is reflective of who they truly are on the inside. This is a movie about being able to let go and allow others to take the lead when the moment comes for them to do so, while at the same time respecting the wisdom and experience age can bring, especially when situations are on the verge of spiraling out of control.

Forky is a superb new character, his metamorphosis as he comes to realize who he is and what he wants from his new life as Bonnie’s favorite toy nothing less than magical. There are also some lovely moments with Buzz and many of the familiar characters from past Toy Story entries, the stoic action figure finally learning how to trust his instincts and listen to his inner voice (which he hysterically initially mistakes for something else entirely) for arguably the first time. Reeves’ Duke Caboom is also an absolute hoot-and-a-half, while Hendricks’ turn as Gabby Gabby has a melancholic grace that caught me by surprise.

But this is Woody’s show, or at least his and Bo Peep’s, and watching the cowboy take full stock of his current situation is honestly incredible. His evolution from the first film to this one comes full circle in a way I did not see coming, his journey concluding in a manner that had joyful tears streaming down my check by the time the screen faded to black and the curtain closed. Hanks invests something extra in his performance this time that goes beyond anything he’s done previously, his reunion with a dynamic Potts showcasing a bravura verbal and emotional chemistry between the two actors I found positively rapturous.

It’s hard for me to ask Pixar or Disney to stop making sequels to the classic 1995 computer animated marvel that put the former on the map and has made the latter billions of dollars over the course of two-plus decades when each of them ends up being this magnificent. All the same, I do hope Toy Story 4 is the last of the series, if only because the bow it puts on Woody’s four-film expedition is tied with such loving perfection I have trouble imagining the filmmakers could ever do better than what they miraculously accomplish here. I love this series and I am in awe of this supposed final chapter, and I’m all but certain every moviegoer who buys a ticket will likely end up feeling much the same. 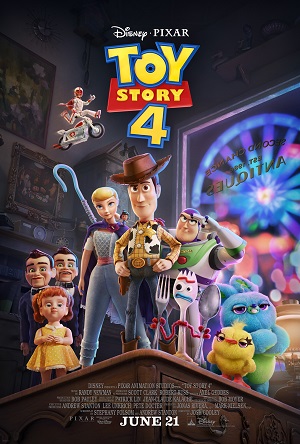