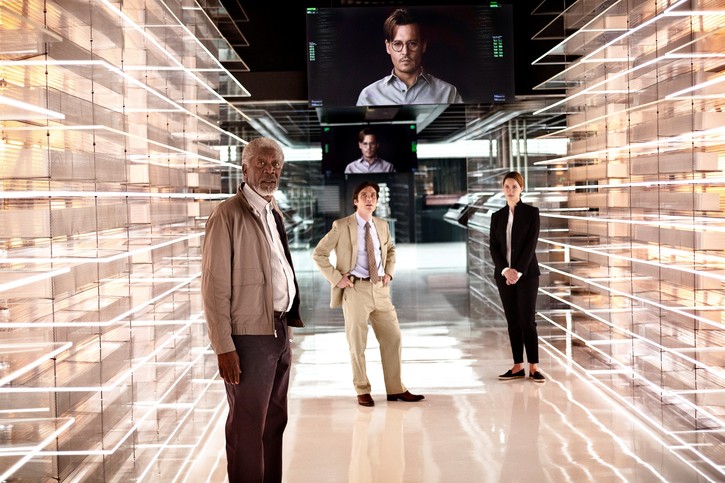 Will Caster (Johnny Depp) and his wife Evelyn (Rebecca Hall) are scientists at the forefront of the movement to create the first fully functioning, self-sustaining Artificial Intelligence or A.I. On the day they are giving a talk on the subject, facilities across the United States working in the field are hit by terrorists who believe this technology to be an abomination, a danger to the future of humanity itself, many leaders in the field brutally murdered.

One of the victims of this assault is Will, a lone gunman shooting him in the gut before taking his own life. While it initially appears he’ll survive, turns out the bullet has been laced with radiation meaning the scientist’s time left on the Earth will be tragically short. But Evelyn will not let her husband go without a fight. With the assistance of friend and colleague Max Water (Paul Bettany), she’s going to upload Will’s consciousness into the supercomputer the two of them have been designing, those allowing him to live on even if his body has been rendered useless. 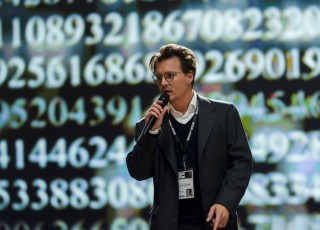 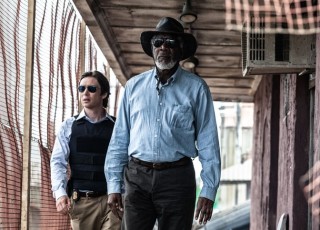 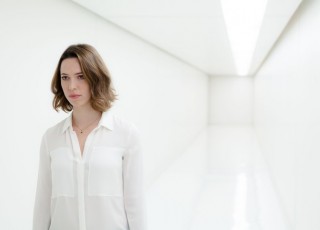 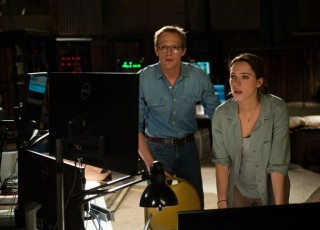 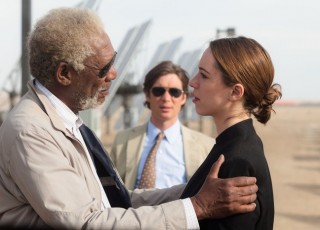 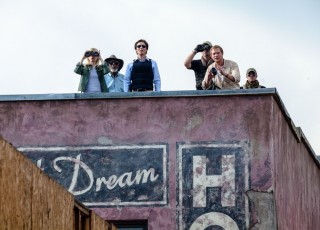 This is the setup to Oscar-winning cinematographer Wally Pfister’s (Inception) directorial debut Transcendence, a movie that follows a litany of familiar and well-worn science fiction tropes attempting to give them a modern day, ecologically-minded spin in the process. Jack Paglen’s script brings to my mind everything from random “Twilight Zone” episodes, to “Max Headroom” commercials, to The Lawnmower Man, to the writings of authors as various as Harlan Ellison, Isaac Asimov and William Gibson. Heck, even the recent Captain America: The Winter Soldier contains a subplot eerily reminiscent of the main action explored here, proving without a doubt the ideas being talked about aren’t exactly new or original even though they’ve been given a posh 21st century polishing.

Even so, Transcendence is fairly fascinating, at least for the initial hour, concepts of self, identity and what it means to be human played out in cybernetic realm that feels startlingly authentic. Evelyn’s love for Will is so all-encompassing she has trouble spying the potential dangers shining brightly in front of her. At the same time, Max can’t help but question what it is the pair of them has done the moment his friend’s intellect and consciousness claim to still be of working order, the thought of what he’ll do if uploaded to the internet chilling him to the bone.

It’s in these building block portions that Pfister does his best work. He imparts a ton of information, the levels of exposition needing to be explained so all that’s transpiring makes even passing sense staggering, but does so in a way that is consistently easy to keep track of. Without talking down to the audience or belittling the viewer’s intelligence he nonetheless finds a way to explain what is going on in easily digestible fragments, Jess Hall’s (The Spectacular Now) cinematography and David Rosenbloom’s (The Insider) editing filling in the blanks allowing him to strip away the dialogue without losing an ounce of narrative clarity in the process.

If only the second hour could say the same. At a certain point, Paglen’s script transforms from heady, what-if scientific thriller cum horror story into a rather ungainly and unfocused action flick, explosions and gunfire taking the place of thoughtfulness and clarity. The movie sets up an intriguing scenario filled with tons of curious characters all with interesting stories aching to be told only to lose sight of them as things rush towards the somewhat inevitable conclusion. There just isn’t the time to make any of this work like it should, and the moment Morgan Freeman’s fellow scientist and Cillian Murphy’s chilly FBI agent reenter the proceedings (they’re around during the initial sequences when Will gets shot) things almost can’t help but fall disappointingly off the rails.

It’s too bad, because for a while there Pfister had me happily in his pocket, eagerly lapping up what it was he wanted to show me and excited to discover in which direction things were going to go to next. Hall is extremely strong as a wife driven beyond all limits of known sanity to fight for her husband’s survival while Bettany is wonderful as a man eager to help her do it only to begin to shrivel in horror once the realization of what they’ve done starts to sink in. The pair anchor the first 60-plus minutes with remarkable, robust ease, each going in differing directions only to come full circle once things almost inevitably spiral back in on top of themselves during the climactic act.

The problem is that when the horror of the situation finally reveals itself by and large the complex characterizations needed to make these happenings resonate never has fully materialized. While Evelyn does remain front and center for the majority of the picture, Max sadly disappears for a great deal of the running time only to reemerge as something of a completely different person than the one we are introduced to at the start. On top of that, the supporting cast, including Freeman, Murphy, Kate Mara, Cole Hauser, Clifton Collins Jr., Josh Stewart, Xander Berkeley and Lukas Haas are almost universally wasted, none of them given near enough to do to make any of their collective actions matter in ways that mean anything substantive.

Even so, Transcendence is hardly a waste of time. Pfister’s visual style, honed to perfection working for Christopher Nolan for over a decade, is in grand display, and for a good portion of the film he manages to do a marvelous job masking the majority of the narrative shortcomings giving things an undeniable urgency that’s invigorating. More than that, he stages a glorious final scene near the end between Depp and Hall that encapsulated many of the inherent themes and ideas contained within Paglen’s script beautifully, bringing subtly wangled tears to my eyes I wasn’t even slightly ashamed to shed.

That the movie doesn’t ultimately work is decidedly a problem but that doesn’t make the experience of watching it any less riveting, and as failures go this is arguably one I’ll be thinking about and pondering for many months to come. 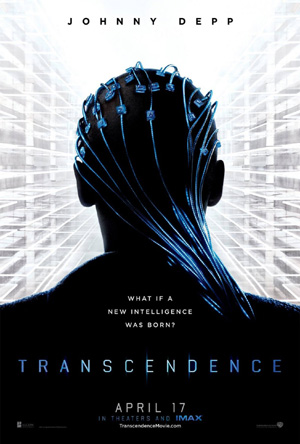