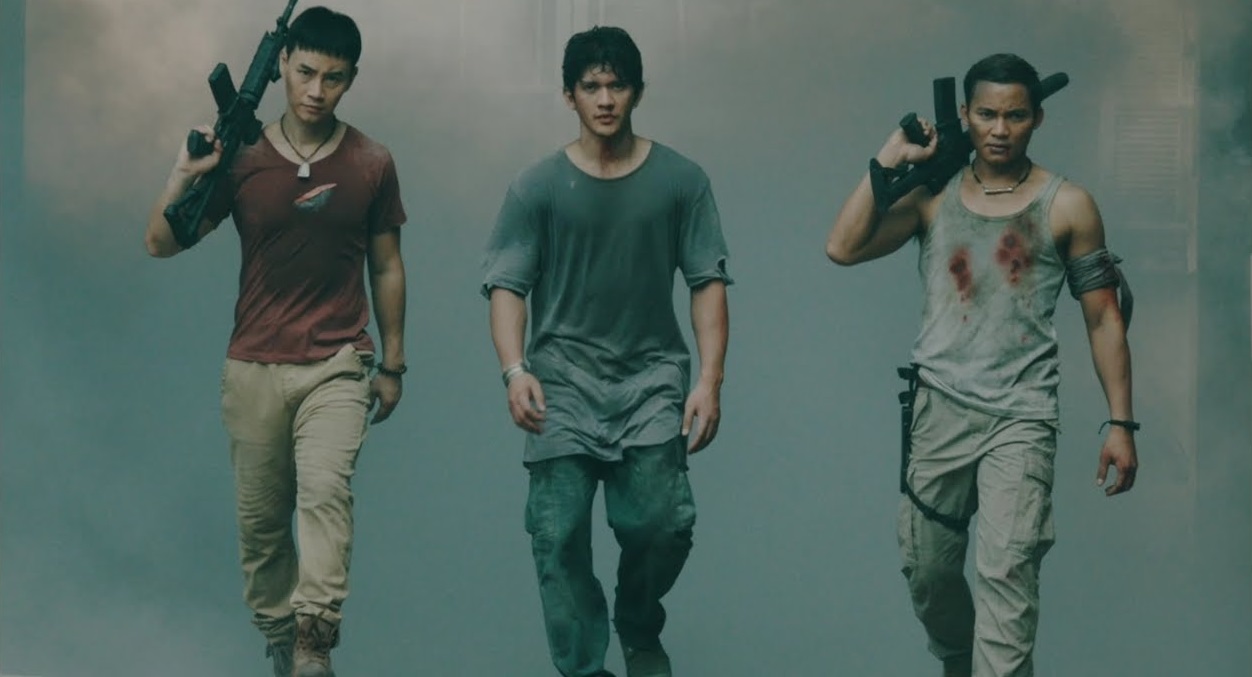 An elite team of mercenaries led by the commanding Devereaux (Michael Jai White) is somewhere in an East Asian jungle searching for a hidden military encampment ostensibly to free a group of unjustly detained political prisoners. But that isn’t the actual plan. The team is going to double-cross their two expert trackers Payu (Tony Jaa) and Long Fei (Tiger Chen), leave for dead any civilians trapped at the camp and lay waste to every soldier who is guarding the actual prisoners actually being held there. They are doing this in order to free their boss, international terrorist and assassin Collins (Scott Adkins), the team needing his tactical leadership in order to pull off their latest violently high-profile assignment they’ve recently been paid a tidy sum to accomplish. 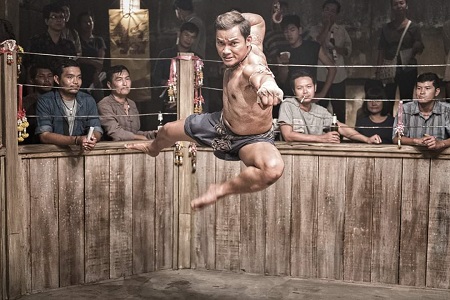 Crack guerilla fighter, military tactician and expert martial artist Jaka (Iko Uwais) is one of the soldiers assigned to help guard the camp. During the assault his wife is killed and he is left unconscious by a massive explosion. Waking up, he tracks down both Payu and Long Fei, both of whom secretly escaped after they were betrayed by the mercenaries, discovering neither man was responsible for the chaos and tragedy at the camp but were instead just additional victims. None of which stops him from setting both men up for slaughter, Jaka revealing to local authorities where they are hiding while also clandestinely informing the money handlers funding Collins and his crew that they weren’t so successful rubbing either out back in the jungle.

I’m not sure what else to say in regards to the wildly nonsensical and convoluted plot that’s fueling high-octane action extravaganza Triple Threat. Needless to say, the film also revolves around the potential political assassination of the philanthropic daughter of a deceased billionaire, Xian (Celina Jade), who has made it her mission to stamp out political and police corruption in China and Thailand by eradicating drug cartels and empowering communities with an infusion of dedicated funds designed to increase educational and employment opportunities. There’s also a full-on assault on a police station where Payu and Long Fei just happen to be being held at and also where Xian runs to for help after the first attempt on her life goes sideways. Finally, there’s an additional subplot where Jaka infiltrates Collins’ crew as their new guide, his reasons for doing this so convoluted and irrational there’s no way I can describe them in any type of detail that wouldn’t end up sounding nothing short of absurd.

Granted, trying to find anything inside of this movie that could be construed as rational or that makes much in the way of practical sense is a waste of time. This is a massive, fast-paced cartoon that pits a number of the screen’s most iconic cinematic martial artists from Asia and the United States against one another and then allows them to face-off in extended bouts of hand-to-hand combat. It features sequences of stunning action as Payu and Long Fei inadvertently become Xian’s protectors all the while Jaka attempts to orchestrate Collins’ demise while standing right there next to him. There are chases. There are shoot-outs. There are feats of derring-do that will likely rival just about anything that will hit theatre screens at any point throughout the remainder of the year, all of it in service of what I can only imagine is a bizarrely silly story that was purposefully dreamt up that way by veteran stuntman turned director Jesse V. Johnson (The Debt Collector) and his trio of screenwriters right from the beginning.

Even if it all is ridiculous I kind of loved this brutally visceral action extravaganza anyhow. Watching the likes of Jaa (Ong-Bak), Uwais (The Raid), Chen (Man of Tai Chi), White (Black Dynamite), Adkins (Doctor Strange), Michael Bisping (Den of Thieves) and JeeJa Yanin (Chocolate) go at one another with such giddy ferocity is an absolute treat. Johnson stages each encounter between hero and villain with visually pugnacious restraint, he and cinematographer Jonathan Hall (Zombeavers) allowing these sequences to play out in an aggressively fluid manner where the athletic prowess of the actors is never a question mark. As such editor Matthew Lorentz (Accident Man) cuts things efficiently, preferring to craft seamless moments of brutal intensity that leap off the screen and where the viewer ends up feeling each punch to the gut and kick to the face as if the individual doing this fighting had every intention of striking them instead of their on-screen opponent.

I know I’m beating a dead horse saying this again, but from a narrative standpoint none of this makes a lick of sense. If you asked me what Jaka’s overall plan is to erase Collins and his crew I couldn’t begin to tell you what it is. As for the terrorist and assassin, his reasons for putting his team members in pointlessly inane harm’s way time and time again is frankly inexplicable. In regards to the sheer volume of coincidences required to bring Payu, Long Fei and Xian together and send them on the run they are substantively titanic, and trying to list them all here inside this review would require multiple paragraphs.

What’s crazy is how little any of that matters in a negative way. The action is so consistently spectacular, and Chen, Uwais, Jade and especially Jaa are so unfailingly charismatic, that the fact the story is a total mess hardly bothered me at all. Everything builds to a magnificent final showdown where the three heroes face off against Collins and the remainder of his crew in a series of stupendous bouts of martial arts prowess and athletic strength that are nothing short of sensational. All of them are amazing, every single one, everything building to a climactic bout featuring Adkins, Chen, Uwais and Jaa that’s beyond glorious. All of this and more makes Triple Threat an eye-popping marvel fans of hardcore action cinema are undoubtedly going to be delighted with, multiple viewings not so much anticipated as they are honestly undeniable. 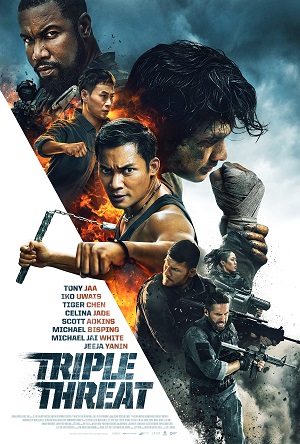