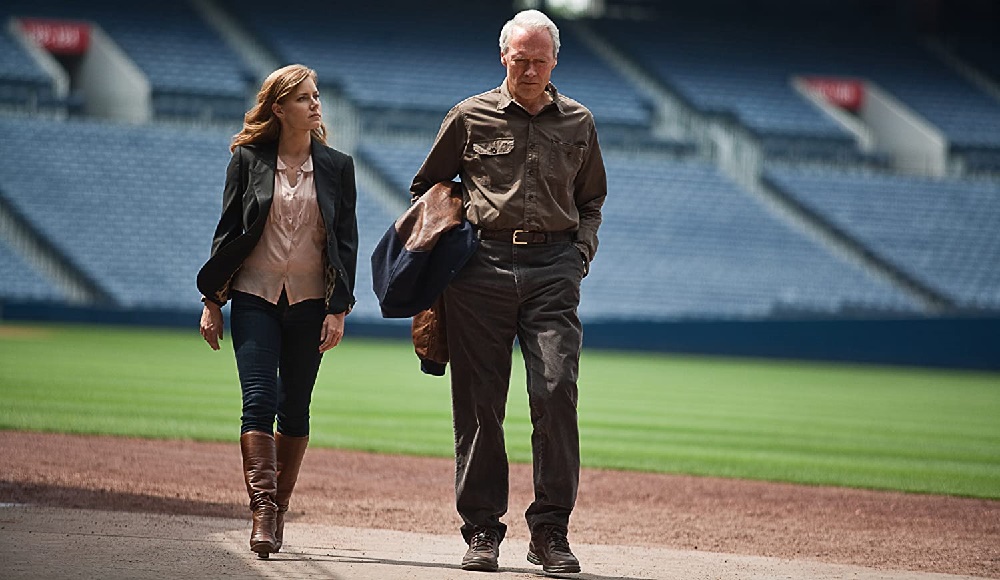 Cliché Curve Strikes Out at the Plate

I’m having a hard time trying to write a review of longtime Clint Eastwood producing partner Robert Lorenz’s directorial debut Trouble with the Curve. Not because I don’t have anything to say, but more because the film is so gosh darn nice I feel sort of bad that I didn’t like it. Beautifully and classically lensed by the great Tom Stern (The Hunger Games) and meticulously edited by Joel Cox (Unforgiven) and Gary Roach (J. Edgar), acted with grace and flair by its all-star cast of professionals, the simple truth is that this anti-Moneyball isn’t very good, Randy Brown’s unimaginative script striking out at the plate every time it comes up to bat.

And that’s the rub. I liked everyone in this movie. I liked the way it looked. I liked the way it moved. Heck, I even liked that Eastwood didn’t wear sixteen different hats on this production and focused on his performance. I never hated sitting in the theatre watching it, individual moments even bringing a winsome smile to my face I’m perfectly happy to talk euphorically about.

But that script. Yeesh. It’s a disaster. It’s almost as if Eastwood and Lorenz were so obsessed with finding fault with the baseball metrics put forth as gospel by Moneyball that they allowed newcomer Brown to write whatever he gosh darn wanted to as long as he made sure to focus on the idea that real baseball scouts know everything and computers shouldn’t be trusted. They put this belief ahead of the narrative cohesion, and in the process allowed Brown to write a schmaltzy and sophomoric spectacle of melodramatic angst that reeks of cliché.

The basic story concerns aging Atlanta Braves scout Gus Lobel (Eastwood) who is on the verge of being put out to pasture by the organization due to an overzealous push by devout computer metrics devotee Phillip Sanderson (Matthew Lillard). Sent to look at a potential number one draft pick, head of Braves’ scouting Pete Klein (John Goodman) convinces Gus’ estranged lawyer daughter Mickey (Amy Adams) to join him on the trip, hoping her presence might put his friend at ease so they can have the “retirement” conversation without him getting angry.

Never mind that she’s in the middle of a case that could lead to partnership at her firm, in the world that Brown, Lorenz and company have created it makes perfect sense that she would let all that fall to the wayside to reunite with her father. Throw in Justin Timberlake as a former major league pitcher Gus once scouted whose career was derailed by injury now trying to cut it as a scout for a rival organization, and couple that with their all being in North Carolina to look at a selfish malcontent undeserving of the spotlight, and the seeds for a relatively routine familial sports melodrama have all been planted.

Yet with a cast like this, with behind-the-scenes technical talent boasting multiple Academy Awards and numerous nominations, it’s hard not to find enjoyment in at least some of what is going on. Eastwood, basically doing the suitable-for-all-ages version of Walt Kowalski, the foul-mouthed heart-of-gold racist from Gran Torino, is as magnetic as ever, while Timberlake, Goodman, Lillard, Robert Patrick and the rest of the supporting cast are all pretty great. Also worth mentioning is composer Marco Beltrami’s (The Hurt Locker) lovely, elegantly ethereal score.

The belle of the ball, however, is Adams, and she hits a homer in virtually every scene she’s involved with. She gives a wonderful performance, and in a better motion picture I’d be hard-pressed not to call her work as Mickey downright award-worthy.

All of which brings me back to the script. If you thought Disney’s 1994 remake of Angels in the Outfield was syrupy, wait until you get a load of the baloney doled out by Brown during the final 15 or 20 minutes of this obnoxious bucket of treacly drivel. It’s one head-slapping moment after another. Worse, all of it had been indelicately foreshadowed early on, making the catastrophic climactic events all the more painful to try and endure. Things become so hackneyed, so herky-jerky, so agonizingly self-important and maudlin I was close to flabbergasted as I watched it all happen, and with each foul ball I found myself wanting to steal remaining kernels of popcorn from the guy in the seat next to me so I’d have something to throw at the screen.

But, as I already said, so much of the film is so gosh darn nice, so freakishly amiable, I feel like I’m being some sort of heartless cretin for disliking this one so much. Be that as it may, as immaculately composed as this effort is, as wonderfully acted as it might be, that script is a disaster, all of which makes Trouble with a Curve a swing and a miss so mystifyingly inept when considering that the pitch thrown its way was straight down the middle of the plate. 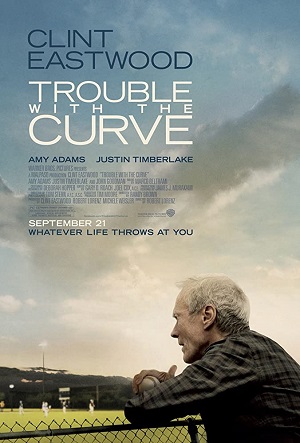