These Games Worth Hungering For

I am a fan of author Suzanne Collins’ The Hunger Games trilogy. I find them to be a compelling allegory about the abuse of power and the price of achieving personal freedom, feel that its examinations of what the cost of sacrifice and revolution end up being are lessons young and old alike could well use to revisit. Most of all, I find main character Katniss Everdeen to be a heroine young woman everywhere should strive to emulate, and unlike her contemporaries displayed on reality television and in the pages of most Young Adult fiction (I’m talking about you, Stephenie Meyer), this is a female role model I’d be proud to have my own nieces grow up wanting to be like.

I can’t say I felt going into my press screening of The Hunger Games that Collins, director and co-screenwriter Gary Ross and Breach filmmaker Billy Ray was the right team for this job. In respect to Ross, I love his scripts for Big and Dave, while I also feel Pleasantville is one of the more underrated classics of the past 15 years. But his major Oscar nominee Seabiscuit never did a lot for me, and the thought of him trying to meld his more uplifting sensibilities with Collins’ darker thematic approach didn’t initially appear to be something I was going to respond favorably to.

I was wrong. His version of The Hunger Games, while not perfect, is probably as magnificent I even my wildest dreams could have hoped for it to be. No matter what some will say, no matter how hard they try to make an argument that a PG-13 rating dilutes the material and that he should have been more aggressive with the film’s more violent elements, the truth is that the sheer emotional weight of the scenario has been gloriously translated to the screen. There is no softening blow, no lighter punch, the sight of children being forced to kill children for the entertainment of the privileged few and the continued subjugation of the masses every bit as sickening and as destructive as it deserves to be.

The movie is set in a future world where America has been undone by some sort of ecological crisis, ripped apart from within by strife, poverty and warfare. Renamed Panem, the country has been separated into thirteen different districts with a ruling Capitol in the center. During the last uprising, District 13 was destroyed while the other twelve were brutally subjugated by the Capitol’s military might. In order to show their dominance, each year the Capitol stages a brutal pageant where one boy and one girl, ages 12 to 18, are randomly chosen to compete to the death, their gladiatorial battle broadcast to the nation as both a spectacle and as a warning in order to quash any thought of another revolution.

This is the seventy-fourth year of these Hunger Games, and in District 12 Katniss Everdeen (Jennifer Lawrence) has volunteered to compete after her 12-year-old sister Prim (Willow Shields) has her name called. She is quickly taken from her mother’s grasp, sent to the Capitol with unlucky fellow competitor Peeta Mellark (Josh Hutcherson), the baker’s son once showing Katniss a bit of kindness she’s never forgotten. The duo are mentored by former winner Haymitch Abernathy (Woody Harrelson), a drunken lout who long ago gave up any pretense that a conscript from his district would have the skills to potentially follow in his victorious footsteps.

It’s more sprawling and ambitious than this, of course, but to say more would potentially ruin the surprises. Granted, as this is a trilogy (to be split into four chapters, Lionsgate already announcing the final entry, Mockingjay, will be a two-part affair) figuring out who survives this survivalist made-for-TV battle isn’t difficult. But how does she get there? What sacrifices must be made? What are the moral complications for someone who doesn’t want to be a puppet for the Capitol to remain true to her beliefs? How are the seeds of revolution sown? What is it to be turned into a symbol when all you want to do is live up to a promise made to a crying sister?

These are the questions haunting Katniss as she propels herself onward, feigning teenage love for Peeta when the boy she believes her heart belongs to, Gale Hawthorne (Liam Hemsworth), is still back at home in District 12 looking after her sister and mother. She must use her hunting skills, honed in the off-limits wilds surrounding her homestead, to search out and destroy a different kind of prey, taking her humanity to its breaking point as she ends lives, protects others and seeks revenge for what she perceives as inhumane wrong.

Lawrence is spectacular. She’s in 90-percent of the scenes, forced to carry a sprawling, 142-minute epic almost singlehandedly. Her depiction of Katniss is genuine, fully-formed and complexly realized. I felt her struggles, both internal and external, throughout the picture, and in many ways this is the Winter’s Bone Academy Award nominee’s most incredible performance yet. There’s no way this movie works without her, and while it’s early, and while the subject matter doesn’t normally lend itself to accolades, I’d go out on a limb and say she’s sensational enough that a second Oscar nomination isn’t entirely out of the realm of possibility.

Ross rises to the occasion. While things aren’t perfect; the washed out blue tones of the Districts, filmed with handheld herky-jerkiness, can get tiresome, some of the CGI effects, especially in the Capitol and showcased during the events preceding the actual Hunger Games, aren’t that well realized, while the seeds of the Peeta-Katniss-Gale love triangle aren’t planted with anything approaching conviction; overall the director’s command of the material is astonishing. For a film that runs as long as this one does I never felt bored or did I ever think things were being elongated for no discernible reason. He allows for the impact of each given situation to fall like a sledgehammer, two poignant moments in particular, neither of which I’ll spoil here, bringing me to well-deserved tears.

Will fans of the books respond stronger to this than the casual viewer might? Maybe, but that doesn’t mean newcomers won’t be swept away by the chaos and calamity as well. Do those who claim the film is nothing but a rip-off of Kinji Fukasaku’s Battle Royale and should be summarily dismissed have a valid point? No, not really, and while I don’t completely buy Collins’ assertions she’s never heard or seen that film, her series of books are more inspired by ideas present in Greek mythology and Biblical theology than they are anything else.

As for me, I’m still in awe. I was blown away by The Hunger Games. Like all great literary adaptations this one remains faithful to its source material but isn’t beholden to it. Ross, Collins and Ray have created a cinematic story that fits our time and place with upsetting eloquence. It lived up to my lofty expectations, maybe even surpassed them, and it’s clear to me that the odds are definitely in this series’ favor moving forward and I can’t wait to see where the filmmakers take things next. 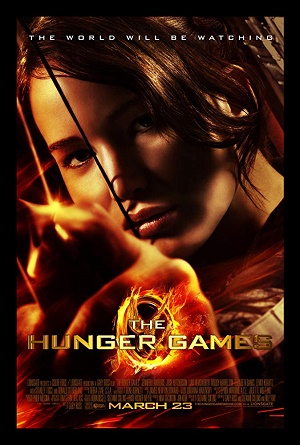