Joel and Ethan Coen have won four Academy Awards, two of them for screenwriting (Fargo, No Country for Old Men). William Nicholson has been nominated twice (Shadowlands, Gladiator) for his screenplays, while fellow scribe Richard LaGravenese has one Oscar nod (The Fisher King) under his belt, the duo two of the more well-respected writers in Hollywood. Collectively, this is a powerhouse foursome, and it’s hard to imagine how a film shepherded to the finish line by all of them could meet without anything close to failure. 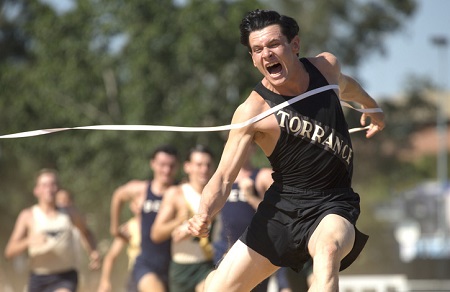 All of which makes Unbroken, based on the book by Laura Hillenbrand chronicling the staggering, inspirational life story of Olympian and WWII Japanese prison camp survivor Louis Zamperini, all the more vexing. One note, frustratingly didactic, beating the viewer over the head with its melodramatic histrionics, the movie is oddly superficial, reducing the man’s complex, incredible history into nonchalant talking points reeking of mawkishness. More, director Angelina Jolie seems obsessed with focusing on her central character’s suffering at the hands of his captors and little else, never making the attempt to make any of the supporting players, whether they be fellow Allied soldiers or Japanese guards, complex or three-dimensional, thus cheapening Zamperini’s story in the process.

In some ways this shouldn’t come as a surprise. Jolie’s first directorial effort, the Serb-Croatian war drama In the Land of Blood and Honey, was also focused upon suffering, on depicting man’s unspeakable inhumanity to man in as intimate and as blood-curdling a fashion as possible. But where that film was suited to such an exacting and, admittedly, exhausting approach, this one feels mutated and belittled by it. Zamperini’s story is as complex as it is Byzantine, traveling in seas of grey, making right and wrong feel like an illusion and survival an almost impossible dream. By reducing his story to platitudes Jolie, along with her cadre of supremely talented screenwriters, have taken the soul right out of it, leaving an almost paint-by-numbers biopic that’s so transparent in its intentions and dramatic designs it might as well not even exist in the first place.

Yet everyone here is far too talented to deliver a motion picture that is entirely unwatchable. The opening sequences depicting Zamperini’s (played perfectly by rising star Jack O’Connell) job duties on a B-24 bomber are something to behold, filled with tension and emotion as the bombardier navigates along a fractured catwalk trying to help his unit complete their mission and get back home. There are also some glorious bits during his 47-day ordeal trapped at sea stranded with a pair of fellow soldiers, a scene involving a shark getting into their life raft particularly strong.

But once Zamperini ends up in Japan things go from being slightly unfocused to frustratingly tedious, the final hour nothing more than trauma upon trauma, suffering with more suffering, pain and sorrow followed up again and again by more of the same. Which, honestly, would be okay if Jolie and company had spent the time to build up any of the other characters instead of leaving them as ephemeral symbols of right and wrong with nothing in-between, the fact the film refuses to do so beyond annoying. What could have been a strong variation on Merry Christmas, Mr. Lawrence for today’s audiences instead becomes nothing more than a boring, heavy-handed war polemic that does nothing new and even less that’s interesting, everything so nondescript and blasé even the traumas suffered by the hero feel more benign and unrealistic than they obviously were. 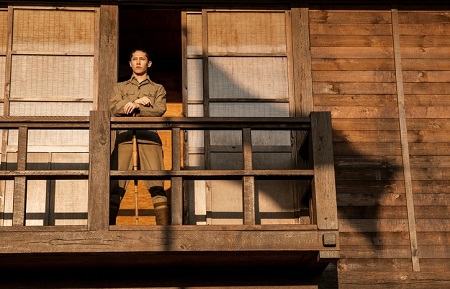 O’Connell is terrific as Zamperini, while veteran cinematographer Roger Deakins (Skyfall, Prisoners) once again does sensational work as far as the elegantly composed visual look of the images themselves are concerned. Alexandre Desplat’s (The Imitation Game, Godzilla) understated, suitably subtle score is also excellent, never overshadowing the depicted actions, instead going out of its ways to augment each and every scene no matter how transparent emotionally much of them end up becoming.

While difficult to watch, I did like Jolie’s In the Land of Blood and Honey and felt she showed a huge amount of promise behind the camera. I actually thought she was a fine choice to pilot this particular ship, her sensibilities feeling, at least to me, to mirror much of the same style and methodology Hillenbrand approached Zamperini’s story with in her best-selling biography.

But sadly, the movie just doesn’t cut it, reducing Zamperini’s story to its base, most basic elements, taking away from it all of the shading and color that inherently made it so powerful and inspiring. His rise as an Olympic athlete falls flat, as do scenes of him on the home front as a young hellion put on the path of the straight and narrow by his loving older brother. As for the prison camp sequences, the less said about those the better, what few authentic moments there might be drowned in a sea of pap and pabulum bordering on insufferable. While Zamperini lived an amazing life worthy of respect and admiration, Jolie’s recounting of it doesn’t do it anything close to justice, Unbroken shattering into so many pieces I’m flabbergasted just how much a waste of time this film proved itself to be. 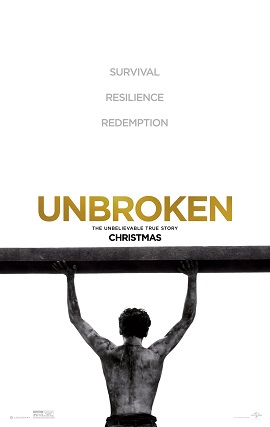