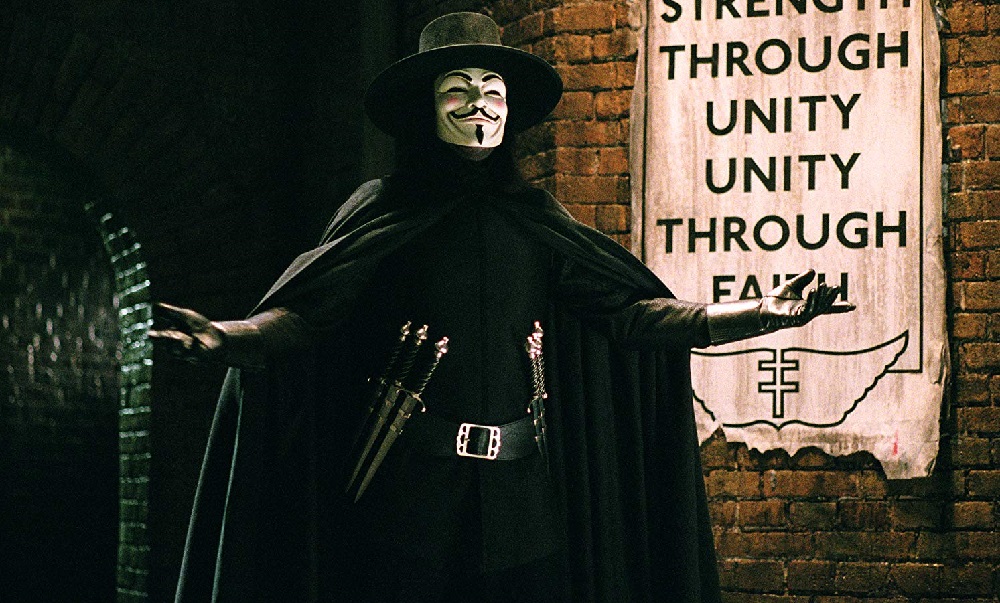 When thinking about V for Vendetta the initial words leaving a viewer’s mouth as the curtain closes will likely be something strikingly similar to that two-word proclamation, and that doesn’t necessarily mean they’re going to be making it in praise. Said reaction could go either way, positive or negative, and rest assured this opinion will be a strong one most who watch this dystopian thriller won’t be keeping to themselves.

For the record, I say, “Holly crap!” in praise. High praise. Effusive, even. V for Vendetta is the ballsiest major Hollywood motion picture I’ve seen this young millennium. Hidden behind a façade shaded in the cartoon features of a graphic novel, this is a futuristic action epic where the hero is, as most probably know by now, a terrorist. And not just any terrorist, but one who believes in his motives entirely, indoctrinates others to his beliefs, kills because he wants to and, just in case the point hadn’t yet been made, likes to blow things up with spectacular aplomb. Granted, he’s also insane, not exactly the nicest guy in the world, has a moral temperature that’s close to frigid, seems to enjoy torturing people and loves using v-flavored verbal alliteration. This man is as complicated and conflicted a character as I’ve encountered in quite some time, alternately oft-putting and enthralling in almost equal measure.

But here’s the thing guaranteed to infuriate every right-wing ultra-conservative religiously-intolerant person in the United States: V, for all his faults and misguided revenge-fueled fantasies, is right.

Right about what? In the world of this movie he’s right about England becoming an intolerant wasteland ruled by a murderous despot intent on making sure the only choices citizens have to make on a daily basis are the ones that agree completely with what the government is currently doing. But, even if V’s points are all spot-on and his country has indeed become a fascist’s nirvana, are his methods still conscionable? More to the point, in a real world dealing with issues regarding a myriad of things eerily similar to those depicted in the film, is raising up a terrorist as a hero something audiences should be excited to support?

The series of graphic novels V for Vendetta is based upon was co-created by author Alan Moore and illustrator David Lloyd. It was first published in 1981. The issues raised within its pages spoke about hate crimes, religious freedoms, government surveillance, free speech, conservative influences on society and a population’s willingness to look the other way when war looms precariously on the horizon. It spoke of fascism, intolerance, bigotry and fanaticism, of battles fought on distant shores and countries dealing with the results of foreign dependence on electricity and supplies vital to their dominance on the world stage, all of which sounds eerily like what is going on in a number of industrialized countries right this very second.

Focusing only on the movie and not letting current political realities feed into my opinion, V for Vendetta is still a slam-dunk. Starring a dazzling Natalie Portman as a young woman whose eyes are opened by a madman, Stephen Rea as a detective looking for a truth he might not want to learn, John Hurt as a dictator mad with power and Hugo Weaving as the mysterious and vengeful masked marauder V, this is a tale told with intelligence, energy, passion and majesty. Masterfully adapted by Lilly and Lana Wachowski and astutely directed by newcomer James McTeigue (an assistant director on Star Wars: Episode II – Attack of the Clones), this is one of the best sci-fi action experiences of this or any other year.

Not that some of this can get a little overly exuberant and silly. The Wachowski’s and McTeigue try to one-up the “Bullet Time” sequences from The Matrix by adding some juvenile effects to V’s knife throwing skills, and there are plenty of coincidences that help bring various characters into one another’s orbit that are moderately ridiculous. Some of the flashbacks are jarring, while many of the visual effects are slightly underwhelming.

None of it matters because much of the script is nothing less than fantastic. The Wachowski’s go for the jugular, pushing the limits of the tale to their breaking point and forcing audiences to assess, not only the characters in the film and their various actions, but their own personal beliefs as well. It is a meditative marvel, kinetically compelling from beginning to end while it refuses to paint in rose-colored mosaics. Most of the villains are far from total monsters, the hero isn’t a saint and the woman taking it all in makes choices sure to perplex an already unsteady audience. The movie is a thought-provoking rollercoaster built inside a world that looks a lot like the one we’re in now, this cinematic mirror image of today’s life and times unnerving to say the least.

Personal politics aside, V for Vendetta is a bold, unflinching portrait of a world viewers might not want to look at too closely. It is a place where the sights and sounds are so harsh and hard they make some cringe and weep for all they’ve suffered and lost. It is a land where right and wrong, Left and Right, liberal and conservative no longer matter when the choice to have a personal opinion opposite that of the government no longer exists. It is a world that may look like the future, smell like the future, even call itself the future, but in the end isn’t the future at all. For the Wachowski’s and for McTeigue the future is now, realizing this before it’s too late the core thematic point I believe they want audiences around the world to hopefully understand. 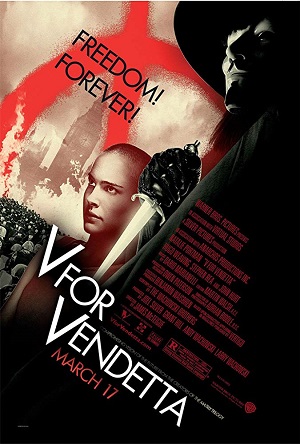