A hardened SWAT team raids a drug lab only to find a dilapidated warehouse filled with dead bodies, numerous victims sitting in front of flickering television screens with their eyes gouged out of their sockets.

An ambitious television reporter (Anna Hopkins) and her veteran cameraman (Christian Potenza) investigate the mystery of a strange sewer dweller given the creepy nickname “Rat Man.”

A white militia group bites off more than they can chew when they try to harness the blood of an undead supernatural terror for their own nefarious purposes.

A young woman (Kyal Legend) working at a funeral home is tasked with supervising and recording the poorly attended overnight wake for a man who died under peculiarly brutal circumstances.

A deranged scientist (Budi Ross) melds human and machine into one with bloodcurdling results, a few of his more tragically unfortunate subjects forced to fight for their lives when a militarized police unit invades this secret lair.

Welcome to V/H/S/94, the warped and wild reinvention of the retrograde horror anthology which started with a bang with 2012’s V/H/S and continued with a massive explosion thanks to its superior sequel V/H/S/2 before crashing to Earth with a disappointing whimper courtesy the lackluster V/H/S Viral. With the return of Radio Silence (filmmakers Matt Bettinelli-Olpin, Tyler Gillett and Chad Villella), Simon Barrett and Timo Tjahjanto behind the scenes, and the arrival of newcomers Ryan Prows, Chloe Okuno and Jennifer Reeder to inject fresh blood into the concept, this fourth installment in the series has been well worth the wait. It might even be the best film in the series.

This is the only V/H/S effort where I liked all of the segments. Some more than others, of course – Reeder’s “Holy Hell,” the wraparound tale featuring that SWAT team, is the weakest of the five, and it’s still pretty dang good – and not every idea is suited to the grungy, shot-on-video found footage aesthetic this anthology is known for. But there’s so much imagination, so much balls-to-the-wall creativity, even the bits that don’t work still feel borderline awesome when everything is taken together as one gigantic whole.

Much like with V/H/S/2 and his marvelous “Safe Haven”, I want to say Tjahjanto offers up the best segment. His “The Subject” is a bonkers, manga-meets-first-person-shooter rollercoaster ride where one of that disturbed scientist’s primary victims wakes up to discover she’s been transformed into a lethal killing machine and what seems like an entire city’s police force is trying to destroy her. It’s a crazy, blood-drenched hoot with surprises around every corner, and by the time Tjahjanto brought his sordidly violent tale to a conclusion, I was so out of breath I almost worried that I was on the verge of passing out.

But Barrett’s segment, the coldly austere, chillingly calculated “The Empty Wake” is positively bone-chilling. Watching that poor funeral home attendee have to stand guard over a lonely coffin is far more unsettling than I’d ever have anticipated something like that was going to be. The way the filmmaker kept building tension, and even though I knew there were only so many places Barrett could take things, I couldn’t help but let out a startled shriek during the climactic moments. It’s nastily inventive stuff.

Then there is Okuno’s deliciously vile and playful “Strom Drain”. What the intrepid reporter and her cameraman discover hiding underneath Los Angeles in the sewers must be seen to be believed. There is a whimsical rapscallion energy to the director’s short story that tickled my funny bone even as it sent delightful shivers cascading up and down my spine. Okuno knocks it out of the park. Or into the sewer. Something like that.

Prows’ segment, “Terror,” is also quite good, his cluelessly idiotic band of violent white supremacists deliciously meeting their match thanks to their own conceitedly puffed-up stupidity. But as solid as his entry in this anthology is, it still rests in the shadow of what Tjahjanto, Barrett and Okuno deliver, and as his comes last it almost can’t help but feel somewhat anticlimactic in comparison to what they all accomplish.

Who am I kidding. V/H/S/94 is a gruesomely disquieting good time. I loved it, and I can’t help but think that fans of the first two entries in this anthology series are going to feel the same about this deliriously entertaining fourth installment. 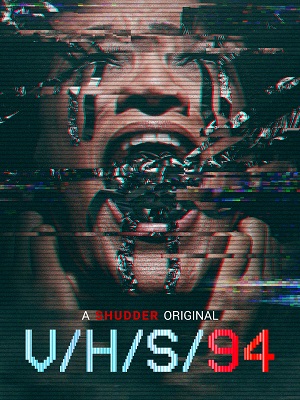