Joel (Evan Marsh) is a nebbish horror journalist who freelances for the genre magazine “Vicious Fanatics.” He lives in a smallish apartment with his roommate Sarah (Alexa Rose Steele). She puts up with his weird peculiarities and jittery, mumble-mouthed behavior just as long as he continues to pay his half of the rent. Joel, however, has something of an unrequited thing for her, and he’s determined to do something extraordinary to win her affection.

Enter Bob (Ari Millen). He recently took Sarah out on a date, and Joel is getting all sorts of sinister vibes from the supposed real estate agent. He follows Bob to a local bar, even going so far as to engage the man in conversation so he can learn more about him. But things do not go as expected, and Joel gets so drunk he inadvertently passes out in a supply closet.

Waking up long after the place has closed, he’s shocked to discover what he assumes is some sort of addiction support group going on. But it’s not problems with drugs or alcohol Zachary (David Koechner), Carrie (Amber Goldfarb), Fritz (Julian Richings), Mike (Robert Maillet) and Hideo (Sean Baek) are talking about, instead it’s a conversation about the best way to dispose of a dead body. They’re all serial killers, and they’re waiting for the last couple of members of their group to arrive before they can kick their meeting into high gear, one of whom just happens to be Bob.

Vicious Fun comes tremendously close to being a pretty great horror-comedy. The setup to this surrealistic night of blood-splattered craziness couldn’t be better. Joel’s attempts to ingratiate himself with the group while he’s understandably trying to keep from displaying vomitous outbursts of barely contained terror are goofily amusing. There’s also a wonderful bit of foreshadowing involving Carrie, Goldfarb’s observational eye-rolls, shoulder shrugs and hand movements as her character listens to this impersonator gamely try to convince the others he’s as lethally evil as they are simply terrific.

My issue is that director Cody Calahan (who is also credited for conceiving the original story) and screenwriter James Villeneuve can’t decide what sort of horror-comedy it is that they’ve created. While understandably broad in style and tone, when everyone involved is playing things relatively straight the film is a giddy blast. When it ventures into slapstick and suddenly feels cartoonish to the point it’s almost as if the cast is winking back at the audience as to how silly all of this is, at that point admit I started to lose interest.

This is most noticeably egregious when there’s a jarring location switch from the restaurant to a practically empty police precinct. Calahan and Villeneuve introduce a trio of cops, two detectives (Kristopher Bowman, Mark Gibson) and a desk officer (John Fray), and it’s like all of them have just walked off of the set of an unmade Reno 911! sequel. They’re out of place and impossible to care about, so when an Assault on Precinct 13-style attack on their office commences, I could have cared less if any of the three lived or died.

But the good still significantly outweighs the bad. From the point Joel walks cluelessly in on that support group meeting I pretty much knew all of this was going to be right up my alley. Both Marsh and Goldfarb have excellent chemistry, the pair having an acerbically relaxed rapport that’s delightful. Even in the middle of such an outlandishly absurd situation, I liked the way the relationship between their two characters authentically evolved. It’s rightfully the core of the film.

Millen takes things a little too far over the top in my opinion, but he still manages to ooze a form of smarmily devilish menace that’s inherently creepy. The truly terrifying performance is given by veteran character actor Richings, and it’s something of a pity his character doesn’t get more to do. But in the case of Fritz, it is highly possible less is more, and I have trouble believing this silently clownish mass murderer would be nearly as chilling a presence had he been the primary villain.

Steph Copeland (The Retreat) provides a solidly bombastic electronic score, and cinematographer Jeff Maher (I’ll Take Your Dead) gamely shoots the heck of the picture, giving things a neon-saturated visual aesthetic that’s suitably ominous. But the technical facets are strong all the way around, and save for some eccentric editing choices near the end during the siege on the police precinct, there’s precious little on this front to nitpick.

It’s the bizarre shifts in tone that make Vicious Fun such an odd duck. Yet Calahan’s film still manages to live up to its title, this vivaciously gory chiller offering up a winning combination of laughs and thrills that left a big smile on my face by the time it was over. Even with my reservations I was still consistently entertained, so much so that if a sequel were ever to be made, rest assured I’ll be first in line to give it an enthusiastic look. 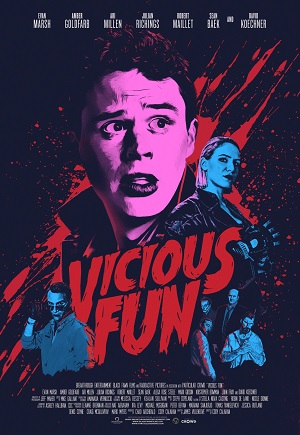