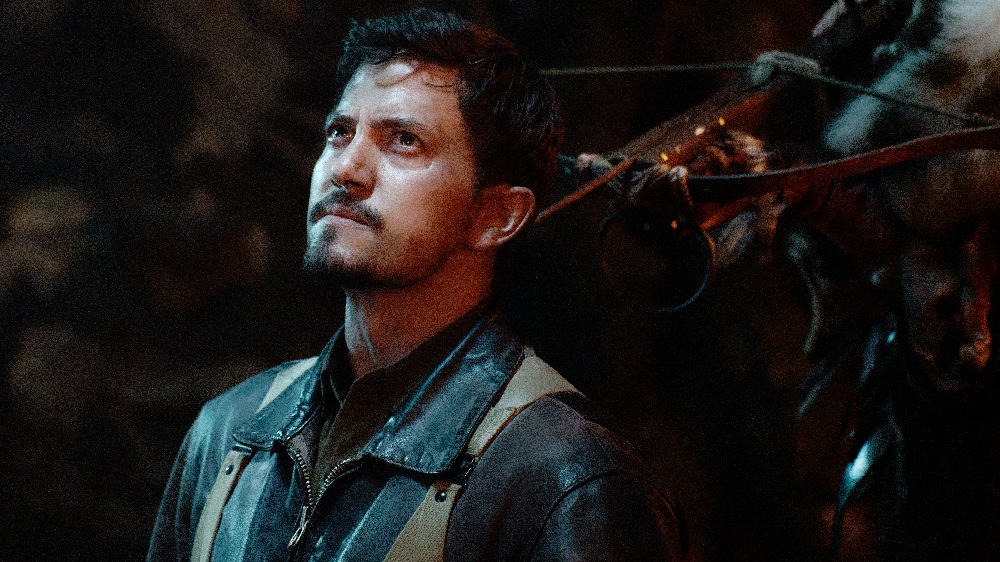 After a US military cargo plane mysteriously crashes over airspace controlled by the Allies and subsequently crashes behind enemy lines deep within the German Black Forest, an elite combat unit led by the gruff Sgt. Brewer (Robert Knepper) is assigned the task of rescuing any survivors. Joining them is the quiet, calmly observational Walsh (Jackson Rathbone), an aid to the flamboyant Maj. Johnson (Mickey Rourke). He’s been ordered to accompany Brewer’s team whether the sergeant likes it or not. His mission is a top-secret recovery operation the less anyone knows the details of the better.

Playing out like a gothic WWII variation on Raiders of the Lost Ark, the action-horror hybrid WarHunt has a couple of solid ideas and one moderately splendid performance from Twilight heartthrob Rathbone. Turns out, the unknown force that took down the aircraft containing Johnson’s precious cargo was nothing less than a trio of murderous witches, utilizing the blood of warriors to feed the fabled Tree of Life and bring themselves an eternity of youth and beauty.

As far as director and co-writer Mauro Borrelli‘s scenario is concerned, there’s not a lot more to it than that. Brewer’s unit finds they’re battling not only Nazis but also their own sanity, as the witches play a variety of craven tricks against the men, picking them off one by one. Walsh, meanwhile, is looking for clues to the Tree’s hiding place, knowing that the Allies need to find and destroy it before Hitler can be informed of its location and produce an unkillable army that will swing the war back in Germany’s favor.

Got all of that? Suffice it to say, this is pretty silly stuff, and on more than one occasion did I giggle audibly even though I was watching the film all by myself. But the cast is solid, and for a good 50% of the story, I started to think that Borrelli and his team were going to pull off this goofy lunacy. There are some solid visual effects, the makeup work is suitably icky, and an opening encounter between Brewer’s unit and a small band of seemingly possessed Germans is handled with energetic flair.

After a certain point, however, the cracks begin to show. For all of Borrelli’s technical ingenuity, it’s clear this is one case where a filmmaker’s ambition exceeded the production budget. The slipshod pacing, coupled with some unfortunate editing decisions, does a poor job of concealing the areas of the picture that come up lacking. Characters don’t get the chance to evolve. When some of them begin to psychologically crumble, there is no weight or meaning to their self-immolation. I was never emotionally attached to a single man, and I could have cared less if any of them succeeded in Walsh’s mission to stop the witches and keep Hitler from getting his hands on the Tree of Life’s powerful blossoms.

Which is a shame, because Knepper is perfectly cast as Brewer, and had the writing been sharper, I fully believe he’d have made this character a dynamic presence worth spending time with. There’s also some potentially interesting stuff happening to the makeup of the sergeant’s elite unit. Again, however, Borrelli never does anything unique or imaginative with the opportunity these men’s casting afforded him; instead, he lets them all be rather basic WWII caricatures straight out of Battleground or Story of G.I. Joe.

The exception is Rathbone. While Walsh is as thinly composed as anyone else in this tale, there’s something about his performance that won me over. There’s a devilishly clever charm lurking behind his eyes, and I like how this made the secretive soldier an ominous presence whose motivations aren’t as easy to determine as they initially appear. There’s a peculiar complexity to his heroics that’s beguiling, granting Rathbone’s daring-do during the climactic third of the picture a swashbuckling resonance I couldn’t help but become enamored with.

The witches? They’re evil, but not nearly as scary as I imagine they were supposed to be. When they do finally show their true colors, as already stated, the prosthetic work that transforms them into gnarly and grizzled creatures of death is rather splendid, but that doesn’t mean they’re terrifying. The trio come across more like big, bad bosses from a second-rate fantasy-adventure video game. Considering how well Borrelli sets them up during the first act, that they prove to be so unthreateningly forgettable can’t help but be somewhat disappointing.

I cannot say the same about Borrelli’s WarHunt. There are some good ideas, and Rathbone is a dashing hero. But while some of the gore is effective, the plot gets more absurdly inconsequential as events progress. Couple that with a few noticeably sloppy technical aspects and a last act lacking in thrills or chills, and not even the cartoonishly flamboyant Rourke is enough to save the day. This film is firing blanks, and any magic it may have had vanishes at roughly the halfway mark, never to return. 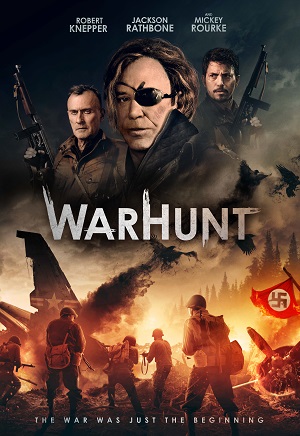