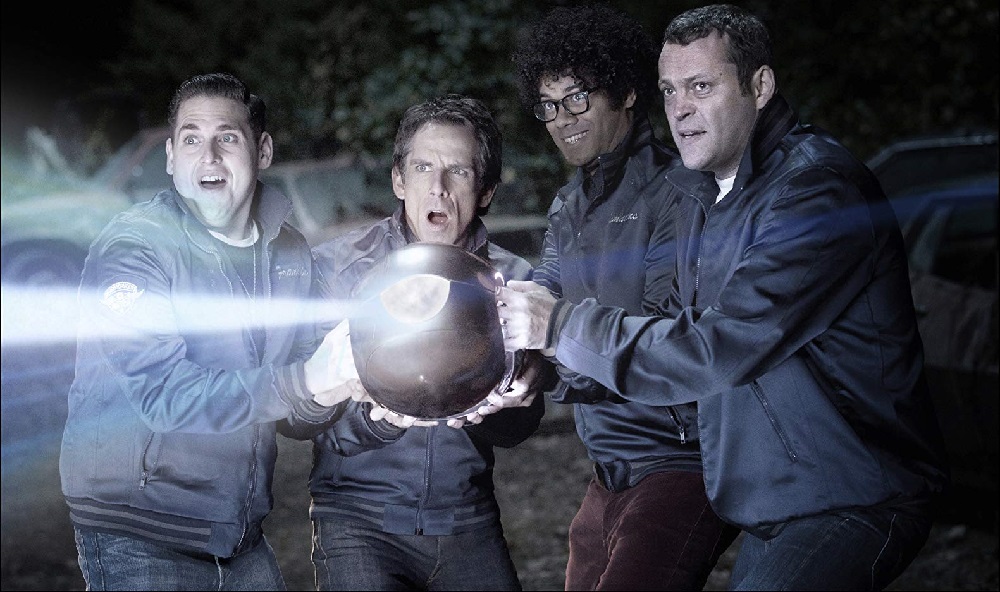 I have to admit, although I knew going into the press screening what the central twist of The Watch was the early trailers had still managed to do a fairly good job of keeping the central events of the movie semi-secret. My preview audiences seemed genuinely surprised by the Galaxy Quest meets Ghostbusters meets Invasion of the Body Snatchers reveal, and this makes talking about the comedy in a review moderately difficult.

Not that I find that I care about that too terribly much. While the movie does have its share of laughs, and even though there are some inspired moments, overall this effort is a shockingly middling affair that oftentimes feels haphazardly slapped together. It’s as if writers Jared Stern (Mr. Popper’s Penguins), Seth Rogen (Pineapple Express) and Evan Goldberg (Goon) came up with the seeds of a decent idea and then assumed their talented quartet of stars Ben Stiller, Vince Vaughn, Jonah Hill and Richard Ayoade would be able to make something special out of it all on the own, all of which makes this a colossal disappointment and a major waste of time.

It doesn’t help that Stiller and Vaughn act like they’re in different motion pictures. They have zero chemistry, their personal styles never coexisting in a relaxed, agreeably humorous way. While individual scenes might have some energy, for the most part the two of them drift around aimlessly trying to generate a connection that sadly refuses to materialize. Considering these two are two of the best think-on-their-feet improvisational comedians around this is a somewhat shocking turn of events.

Hill manages a little better, creating a scarier, more menacing version of his 21 Jump Street character intermixed with Peter Falk à la The In-Laws. He’s got some great throwaway bits, under-his-breath one-liners directed at his costars, at actress Rosemarie DeWitt and at a lamentably unfunny Will Forte I can’t wait to hear again. There is wit to his venom and inspiration behind his sarcasm, the young actor unleashing bursts of verbal cyanide the comedy could use a heck of a lot more of.

But as great as Hill is he’s nothing all that special when compared to his scene-stealing British co-star Ayoade. He might be listed fourth in the credits but that doesn’t make him any less awesome where it comes to producing laughs. His deadpan delivery is marvelous, Ayoade tossing off his lines with such delicious satirical aplomb he had me grinning ear-to-ear. He’s got moments, most notably ones involving a super-secret orgy and his fascination with having a certain part of his otherworldly anatomy massaged that are something else, and the only times I laughed out loud during any of the movie’s brisk 98-minutes were entirely thanks to him.

Yet none of this substantively matters. I found it difficult to stay engaged and impossible to care about what was happening. The laughs were too intermittent, too spotty and too far in-between, and by the time almost all of the gags started revolving around more prurient and juvenile concerns even my inner 13-year-old couldn’t have cared less.

The plot? The less said on that front the better. know that the basic premise revolves around Ohio Costco manager Evan (Stiller), a civic-minded do-gooder who decides to form a neighborhood watch when one of his security guards is mysteriously eviscerated while protecting his store. Vaughn, Hill and Ayoade are the three members of the community who decide to assist him in ferreting out the killer, while DeWitt (who is criminally underutilized) is his baby-wanting wife who can’t figure out why her husband isn’t interested in having sex.

To say anything more would be criminal, as discovering what’s behind all of these mysterious, life-threatening events is the comedy’s primary goal. Granted, it’s not like the writers or director Akiva Schaffer (Hot Rod) attempt to keep things secret for very long, and following the Ghostbusters playbook they reveal their central twist almost immediately. But things do work better if the viewer doesn’t know about any of this before heading into the theatre, and I’m going to keep being purposefully vague so as not to ruin anything for those considering buying a ticket.

While The Watch is hardly a catastrophe, and even though portions of the film do have their charms, I still found it difficult to maintain interest all the way until the end. The climactic sequences are bizarrely unfunny, and often I shook my head in incredulous disgust wondering why all-involved allowed things to turn out so calamitous. While I respect the effort by Stiller and the gang to do something original that doesn’t mean I have to give their film my recommendation after it all ends up being as ridiculously inconsequential as this. 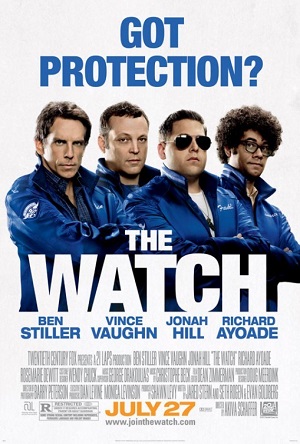