Robert Zemeckis is a great director. Any filmmaker who has the likes of I Wanna Hold Your Hand, Used Cars, Romancing the Stone, the Back to the Future trilogy, Who Framed Roger Rabbit?, Death Becomes Her and Cast Away on their resume deserves all the praise they’ve ever received, and I honestly don’t think that’s up for debate. Heck, even if I don’t personally care for Forrest Gump all that much I still understand it’s a staggering cinematic achievement only a master craftsman could have made. Even his foray into motion-capture animation advanced the medium in a multitude of ways, and while I don’t think The Polar Express, Beowulf or A Christmas Carol are particularly entertaining, I still respect what it was Zemeckis was attempting to do in all three instances.

As far as the director’s more recent period is concerned, I really liked both Flight and The Walk a lot, both of them featuring stellar performances from their respective stars Denzel Washington (who received an Oscar nomination) and Joseph Gordon-Levitt that rank amongst each actor’s best work. The latter also showcased the single greatest use of 3-D of any recent modern picture outside of Avatar, Gravity or Hugo, the film’s closing sequence a virtuoso balancing act that’s extraordinary. As for 2016’s WWII romantic thriller Allied, that one sadly left me cold, and although it was gorgeously composed and elegantly realized there was just something about that Brad Pitt/Marion Cotillard WWII romantic thriller I could never embrace.

I add all of that exposition as it pertains to Zemeckis and his career so that there is a context as I write about the director’s latest endeavor, the fantastical redemptive melodrama Welcome to Marwen. This movie, featuring incredible visual effects where its stars are photo-realistically transformed into plasticized Barbie Dolls and G.I. Joes, revolving around a story that’s based on an inspiring true story of a talented artist who overcame unimaginable trauma to put his life back together and create imaginative works of art, is an absolute disaster. It is the worst film of its director’s career. It is an inexcusable, tone-deaf misfire that does a huge disservice to the person it is supposedly trying to celebrate while at the same time transforming its collection of female characters into risible archetypical caricatures that feel of a bygone era that doesn’t need to be revisited. For the first time ever I hated a Robert Zemeckis-helmed project, a sentiment I honestly never imagined would be even close to possible.

I’m going to keep this as brief as I can because I just don’t feel the need to expound on this monstrosity for very long. The basic plot concerns Mark Hogancamp (Steve Carell), an artist who is beaten within an inch of his life after a group of thugs discover he likes to wear women’s shoes. During his physical and mental rehab Hogancamp creates a fictional WWII-era Belgian town he names “Marwen” where his alter ego Captain Hoagie battles against Nazi oppressors with the aid of a group of beautiful-yet-gruff women who can shoot, drink and talk just as tough as he can. Each of these citizens of Marwen is crafted utilizing 12-inch dolls and are based on people from his life, including members of the gang that assaulted him. But most of them are the women who have helped him heal so they’re the ones who assist Captain Hoagie in his fight against the Nazis, Hogancamp finding inspiration in each of them as he tries to rebuild his life.

The first visit to Marwen is undeniably stunning. The motion capture effects required to bring these dolls to life is astonishing, and what will likely come as no surprise to anyone the technical wizardry required to pull these sequences off is magnificently realized on Zemeckis’ part. As far as combining top-flight visual effects seamlessly into a live action motion picture are concerned, the director is a virtuoso, and it’s unlikely even Steven Spielberg or James Cameron would question the filmmaker’s prowess as far as that particular skill is concerned.

That’s the good news. The bad is so overwhelming I almost don’t know where to begin. Initially, I will say that as impressive as the visual effects are they also become increasingly tiresome as the movie progresses. The sequences in the town just lose their potency and allure, Zemeckis taking his story to this WWII hotbed of Nazi activity so frequently he diminishes their power to amaze.

While that is unfortunate, it’s everything else that ends up making the movie such a heinous and exploitive catastrophe. None of the main actresses involved (a list which includes the likes of Gwendoline Christie, Leslie Mann, Janelle Monáe, Eiza González, Merritt Wever, Diane Kruger and Leslie Zemeckis) see their characters become anything other than a disastrous cliché, while the film’s depiction of an individual dealing with a disability caused by inconceivable physical and mental trauma is borderline offensive. Zemeckis, never a filmmaker afraid of sentiment, sprays it around on this story as if it were coming out of a firehouse, the whole enterprise drowning in a tidal wave of schmaltzy mawkishness that’s as facile as it is assaultive.

Then there is the treatment of Mark Hogancamp’s fetishes and his fascination with women’s footwear. It is as if Zemeckis is completely incapable of dealing with the subject matter, as if for all his good intentions and progressive ideals his concepts of gender and self-expression just don’t allow him to be able to fully process ideas that do not conform to typical societal norms. The movie is so afraid of this facet of Hogancamp’s story that it treats it more as a throwaway element and not a key facet of the main character’s personality. It’s horrifying, and I’m not sure what more there is to add.

Writing about all of this is only making me angry. Jeff Malmberg, an executive producer here, made a brilliant documentary about Mark Hogancamp in 2010 entitled Marwencol. It’s one of this past decade’s best films, an essential piece of non-fiction cinema that tells the artist’s story with grace, precision, intelligence, complexity and most of all empathy. It’s available in multiple formats and on a number of platforms and should be seen right away. As for Zemeckis’ fictionalized recounting of Hogancamp’s tale? While I’ll always love the director for his numerous past triumphs that doesn’t mean I can cut him any slack this time around. Welcome to Marwen is a revolting calamity, and my hope is that audiences choose to avoid this film like the plague. 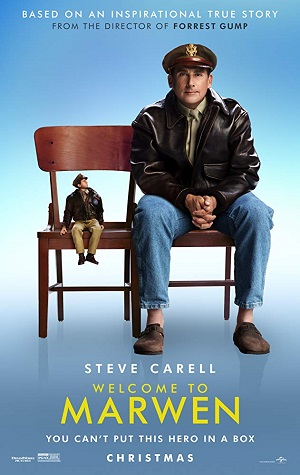