Here’s what I wrote about Werewolves Within back in June:

“Immediately after watching director Josh Ruben’s horror-comedy Werewolves Within I mused that it was like someone had dropped The Beast Must Die, Clue, Arachnophobia and Knives Out in a blender, and the resulting milkshake was poured for me and me alone. That’s selfish, though, mainly because this supremely entertaining motion picture is pretty much flawless and I hope everyone gives it a look. To put it even more bluntly, this is going to go down as one of my favorite films of 2021.

Friendly forest ranger Finn Wheeler (Sam Richardson) has arrived at his new post in the secluded township of Beaverton hours ahead of a major snowstorm. He makes quick friends with postal worker Cecily Moore (Milana Vayntrub) and finds a place to stay at the local inn run by Jeanine Sherman (Catherine Curtin). Others currently staying there include developer Sam Parker (Wayne Duvall), who is trying to convince the locals to approve his oil pipeline, and environmental scientist Dr. Ellis (Rebecca Henderson), who is urging them to vote it down.

With the majority of Beaverton’s residents heading out of town to avoid that snowstorm, those deciding to stick it out find themselves facing an unexpected obstacle far more dangerous than freezing temperatures, downed powerlines, an internet outage and no cell service. There is a beast among them, an animal straddling the line between human and canine. One might even call it a lycanthrope, but as that’s nothing more than a mythological creature, that couldn’t possibly be the case. Or could it?

The remainder of the stacked ensemble includes the likes of Michaela Watkins, George Basil, Sarah Burns, Cheyenne Jackson, Glenn Fleshler, Harvey Guillén and Michael Chernus, and all of them are excellent. Everyone is playing eccentrically to type or goofily against it, each performing their part in this mystery to perfection, yet never in a manner that overshadows any of their co-stars. The group works in exquisite tandem, all of which allows for a rat-a-tat-tat rhythm that’s one part 1930s-style screwball farce and two parts Agatha Christie meets Stephen King whodunit wackiness.

Based on the popular Ubisoft video game, Mishna Wolff’s rambunctious screenplay is terrific. Not only does the writer layer in a handful of solid scares and effective suspense sequences, but she also crafts a mystery that’s worth taking to the time and effort to try and solve. Red herrings are everywhere — which does not mean there still aren’t ample clues littered throughout leading to the correct conclusion. While I can’t say the answer to the werewolf’s identity took me by surprise, the climactic reveal is so well thought out and intelligently realized its effectiveness is undeniable.

Ruben, much like he did with his wonderful 2020 debut Scare Me, confidently balances big laughs with spine-tingling thrills and chills, never allowing one element to overwhelm the other as his rambunctious rollercoaster ride builds momentum. What he’s accomplished is rather similar to Joe Dante’s 1981 classic The Howling, in that he utilizes his remote setting as an additional character, yet at the same time never loses focus on the human drama at the center of all the throat-ripping madness.

As mentioned, the entire cast is worthy of as much praise as can be tossed their way. That said, the bulk of the heavy-lifting is handled by Richardson and Vayntrub, and they are more than up to the challenge.

The former is a sensational frontman, playing things straight even as he gives small-town community rah-rah speeches straight out of a Frank Capra melodrama. Richardson has a manner that makes everything he does come across as idiosyncratically genuine, and as heroes go, Finn is a down-to-earth everyman who is easy to root for.

But the revelation here is Vayntrub. For those who only know her from her AT&T commercials, you’re in for a treat. This is a triumphant performance, a wondrous turn overflowing in comedic inspiration, the actress layering in unexpected emotional modulations that make Cecily far more than the kooky backwoods cherub she initially appears to be. She’s equal parts angel and devil, and as the counterpoint to Richardson’s plucky go-get-’em do-gooder, Vayntrub is a bedeviling ingénue who’s the ideal yin to his yang.

I don’t want to reveal too much. This is a mystery, after all, and going in depth on any one facet could ruin the many tricks Ruben and Wolff have littered throughout for audiences to unwittingly experience. I will say that the score by composer Anna Drubich (Scary Stories to Tell in the Dark) is aces, and that the visual and makeup effects during the climax are outstanding. I’ll also say that film’s production design, set decoration and art direction are out of this world.

Most of all, Werewolves Within is just monstrously entertaining. I loved every single second of it, and having watched this laugh-filled thriller twice already, I cannot wait to sit down for a third viewing inside a theater with an unsuspecting audience on opening weekend.”

There are no extras included with this release other than a few previews of other IFC releases (The Rental, Relic and The Death of Stalin).

Werewolves Within is likely going to make my 2021 top ten list. It’s great. This Blu-ray looks and sounds stunning, so there are no complaints there whatsoever. But why are there no extras? Not a single one? For a film this terrific, that’s just wrong. It honestly makes me a little upset. 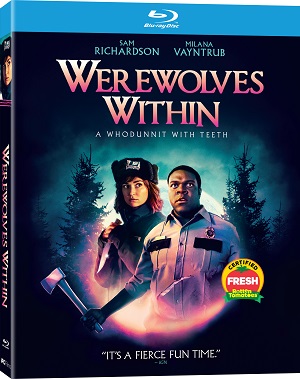