Spielberg Reasserts His Cinematic Prowess with Magnificent West Side Story

It’s been said Steven Spielberg has been wanting to make a full-blown movie musical for decades. Anyone who has marveled at the opening title sequence in Indiana Jones and the Temple of Doom or signature moments from pictures as divergent as 1941, Always, Hook and Catch Me If You Can already knows he has the chops for it. Spielberg is often labeled “America’s greatest living director” for good reason, after all.

Whether or not you think Spielberg deserves that title — I’d venture he’s in the running, but would probably default to Martin Scorsese — it’s still difficult not to wonder why he’d choose West Side Story, of all titles, to finally make his musical dreams a reality. Not only is the Arthur Laurents (book)/Jerome Robbins (play, choreography)/Leonard Bernstein (music)/Stephen Sondheim (lyrics) Broadway production a staple of high school theatrical troupes everywhere, the 1961 feature adaptation directed by Robbins and Robert Wise won ten Academy Awards and is widely considered one of the greatest motion pictures ever made.

We shouldn’t have worried. Spielberg, working closely with screenwriter Tony Kushner and frequent cinematographer Janusz Kaminski, is at the top of his game. This is one the best directed films he’s ever made, which is saying something, the powerful urgency of the original production translated in a manner that remains grounded in the era of the story’s conception yet also feels bracingly modern in several unexpected ways.

Are there issues? Certainly, not the least of which are the obnoxious, overtly theatrical performances from many of the actors portraying the Jets. This facet of the production is made all the more glaring courtesy of the realistically grounded turns by their Puerto Rican adversaries the Sharks. There is also Ansel Elgort as Tony, and while he has a surprisingly strong singing voice and is rather nimble in his athletic dance scenes, he’s otherwise an emotive wet noodle the rest of the time.

But these hardly feel like problems as far as the bigger picture is concerned. This production feels lived-in, entirely authentic on every other level. The dance sequences have pop and vitality, leaping off the screen with effervescent enthusiasm. While still keeping the frame wide and showcasing every movement with exquisite splendor, Spielberg and Kaminski take the viewer inside each dance sequence, the camera moving along with the action in heart-stopping jubilation. I continually found myself holding my breath in spellbound anticipation, each individual moment more stunning than the last.

Then there is the remainder of the performances. Newcomer Rachel Zegler is magnificent as Maria, bringing a winsome resolve to the role that’s spellbinding. Equally wonderful are David Alvarez as Bernardo and Mike Faist as Riff — although I must admit the latter’s singing voice does leave something to be desired — and if both actors emerge as budding superstars over the next few years it wouldn’t surprise me one single bit. Then there is the divine, ageless wonder that is Rita Moreno. She returns to the property that garnered her a Best Supporting Actress Academy Award six decades ago, this time playing convenience store owner Valentina, and to say she is superb would be a drastic understatement.

But the biggest breakout, star-making performance comes courtesy of Ariana DeBose. The former dancer turned singer and actress is flat-out awesome as Anita. She brings vivacious intensity to her portrayal of the character while adding an emotional complexity that’s equally ferocious. DeBose elevates an already stunning cinematic enterprise to a level a few steps above where it already was, her last scene with Zegler one of the finest moments between two actors I’ve had the pleasure to witness in all of 2021.

The story remains untouched, this musical variation on Romeo & Juliet on the rough streets of New York still as comfortingly obvious as it has ever been. But while Kushner’s modifications appear minor on the surface, they are monumental in the unfussy manner in which they are implemented. Issues of gentrification, immigration, racism and police misconduct are presented with subtle specificity, Spielberg allowing these elements to present themselves with organic naturalism and free from didactic embellishment.

Did the world need a new West Side Story? I hate that question. I’d always prefer original material get produced, but when a movie is as grandly entertaining as this one, who am I to get angry at Spielberg for choosing to direct a remake? The filmmaker reasserts himself as one of the great visionaries of the past fifty years, hitting these streets with him an absolute pleasure that I’m going to be singing the praises of for a very long time. 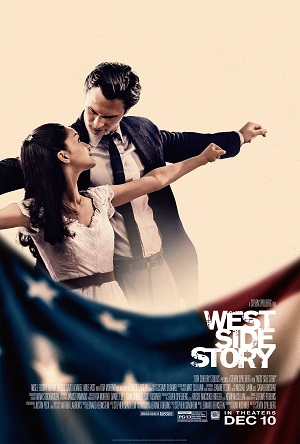