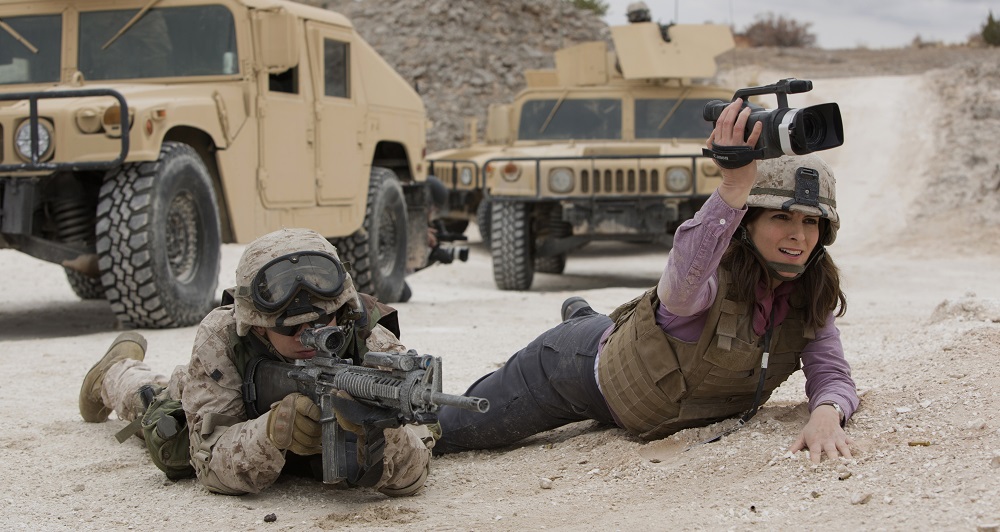 Cable television news producer Kim Baker (Tina Fey) felt like she was going backward, things not exactly going in the direction she’d like them to in either her career or her love life. On something of a whim, she takes an open post as a war reporter, heading to Afghanistan to chronicle the on-the-ground happenings in and around Kabul. She’s not prepared, let alone qualified, but neither, really, is anyone else, so embracing a sink-or-swim mentality and plunging herself feet-first into the messy military engagement seems to be the best course of action. 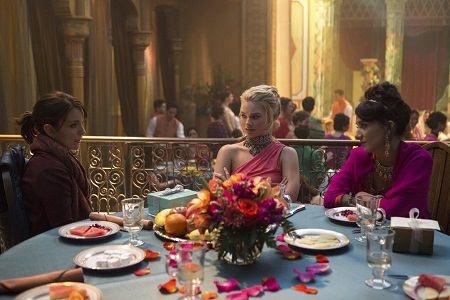 Based on reporter Kim Barker’s best-selling memoir The Taliban Shuffle: Strange Days in Afghanistan and Pakistan, there is a ton to like about directors Glenn Ficarra and John Requa’s latest comedy-drama hybrid Whiskey Tango Foxtrot. Much like the pair’s previous efforts, most notably Focus, Crazy, Stupid, Love. and I Love You Phillip Morris, the movie attempts to make the real humorous, the funny real and the outrageous genuine. It attempts to look at America’s longest war through an absurdist lens, playing in some ways like a female-driven mash-up of Robert Altman’s M*A*S*H, Mike Nichols Catch-22 and David O. Russell’s Three Kings. That it doesn’t reach the same heights as those classics isn’t a surprise. That it at times almost does moderately is.

There is a lot to like here. The movie, written by Robert Carlock of “30 Rock” and “Unbreakable Kimmy Schmidt” fame, takes a streamlined, episodic view of Barker’s time in Afghanistan, presenting roughly three years of her time abroad as she makes the metamorphous from ill-prepared newbie the seasoned veteran. Its satirical bent is apparent from the start, looking at things in Kabul (nicknamed the “Ka-bubble” by the reporters) from a sideways perspective that kept me intrigued throughout. Most of all, it shows that Barker is actually really good at her job, throwing herself into this quagmire immediately even with her massive lack of experience making it initially difficult.

Splitting things into a series of vignettes works the majority of the time. Barker goes on her first embed, figuring out how to attach herself to an important Marine, General Hollanek (Billy Bob Thornton), cultivating that relationship like any good reporter would. She has her interpreter and fixer Fahim Ahmadzai (Christopher Abbott) set her up with important Afghan political leader Ali Massoud Sadiq (Alfred Molina), sidestepping his advances but doing so in a way that allows the politician to remain secure in his haughty masculinity. She makes friends with fellow (and rival) reporter Tanya Vanderpoel (Margot Robbie) and gets close to photojournalist Iain MacKelpie (Martin Freeman), all of them reveling in the over-the-top Kabul nightlife all of the journalists and their security teams lose themselves within as they try to not let the horror of what they are covering get the better of them.

There are times where Ficarra and Requa get a little to observational, almost as if they’re slightly afraid of the material, that if they dig too deeply the audience will run screaming in the opposite direction. As such, they allow some of the coincidence running through Carlock’s script to get the better of them, especially during the rushed, not nearly as focused as it arguably should be final act. Budget cuts, betrayals, abductions and rescues all crash one into the other, all of it becoming something of an emotional jumble that’s never as intimate or as affecting as so much of the rest of the film is.

But they right the ship with a terrific climactic sequence that brings things full circle, Barker returning to speak with a soldier she made the acquaintance of during her early days in Afghanistan, and while what he says smacks a little of “movie speak” oddly that’s okay, the tears I shed during this moment feeling remarkably genuine. I loved the restraint her, the way the two directors allow Fey and character actor Evan Jonigkeit to do all the heavy lifting for them. It’s a superb little moment that builds eloquently and with precision, and in its way says more about the still ongoing war than anything else in the entire motion picture. 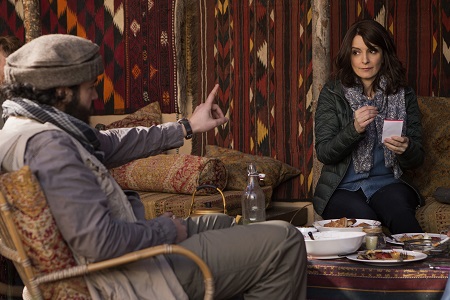 Fey is very good, and it’s obvious this movie is a labor of love for her (she’s also one of the producers), but she never disappears inside the character, and there are moments here or there where her incarnation of Barker feels a little like a mixture of her Mean Girls educator and her Sisters hellion. But she has terrific chemistry with Freeman, while her scenes with Abbott – who is excellent if oddly cast, the Caucasian actor not exactly of Middle Eastern descent – are some of the best in the entire film. I also loved an early moment when a convoy she’s in gets attacked and, instead of crouching in a corner, jumps out of her armored vehicle in order to get video footage of the incident. Fey’s reactions when she realizes what it is she’s just done are priceless, making Barker instantly relatable in a way nothing else she does in the rest of the movie can equal.

If Whiskey Tango Foxtrot isn’t as incisive or as penetrating as it potentially could have been, for a major studio satirical look at the war in Afghanistan there’s still plenty of food for thought here. Ficarra and Requa get more right than they do wrong, and while Carlock’s script isn’t a warts-and-all expose it digs just deep enough to keep the average viewer with even of a modicum of intelligence satisfied. More importantly, the movie starts conversations that feel more than apropos considering it’s an election year, and on that front alone I’m very happy Fey and company went out on this particular limb in order to make sure Barker’s story saw the light of day. 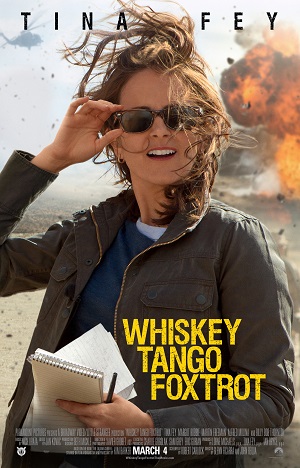