It’s all in service to a fairly silly motion picture, one that never quite makes the most out of its novel premise or generates enough scares or tension to consistently maintain interest for a full 90 minutes. Director Greydon Clark (The Forbidden Dance) and his creative team certainly give it their best efforts, and there are a few amusing twists and turns, but overall the whole thing admittedly falls moderately flat.

Four friends (including a baby-faced David Caruso) go camping at an isolated mountain lake only to encounter a seven-foot alien who takes a lethal liking to them. Sandy (Tarah Nutter) and Greg (Christopher S. Nelson) survive, and in their flight encounter seasoned tracker Joe Tayler (Palance) and unbalanced Vietnam veteran Fred “Sarge” Dobbs (Landau). They are subsequently followed by the alien, the creature a big game hunter who has come to Earth to stalk human prey.

Nutter is a pretty good heroine, Sandy showing a bit more agency than normal for this sort of thing. There’s also a decent twist near the end involving Greg I didn’t entirely see coming. Also, the weapon the alien utilizes to kill its prey – circular discs with poisonous teeth that appear to be able the chew through almost anything – are inventively novel and admittedly somewhat terrifying.

I do think Without Warning is worth seeing, especially for those with a fondness for ‘80s slasher cheese and weird sci-fi goofiness; I just don’t think it ever does a good enough job delivering on any of its various ideas to be considered some undervalued genre gem. Still, there’s some fun to be found here, and it must have a fairly devoted following for Kino to go through all the trouble of releasing a new edition with a sparkling 2K restoration.

Without Warning is presented on a 50GB Blu-ray MPEG-4 AVC Video with a 1.85:1 1080p transfer. There is a noticeable uptick in visual quality between this new release from Kino and Scream! Factory’s 2014 Blu-ray, which is saying something because that one was pretty dang impressive in its own right.

Almost all of these appeared on the Scream! Factory version, with the Mike Mendez “Trailers from Hell” entry taking the place of the excised still gallery from that release.

Jack Palance and Martin Landau gleefully ham it up, and there’s a nifty plot twist at roughly the two-thirds mark that’s moderately surprising, but otherwise Without Warning is one of those low-budget 1980s oddities that never fully delivers on its promise. Kino’s 2K upgrade is impressive, and while I wouldn’t recommend anyone who already owns the Scream! Factory release double-dip, interested parties who missed out on that disc will be more than happy when they get their hands on this one instead. 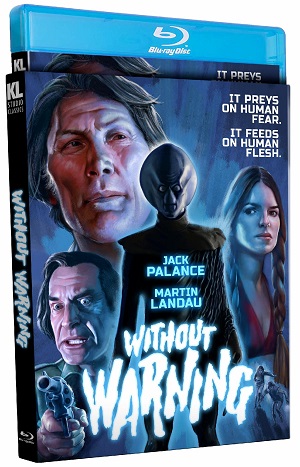