Based on author Danilo Beyruth’s graphic novel Samurai Shirô, I feel like Yakuza Princess should be right up my grungy entertainment alley. An action-heavy “hero’s journey” through Sao Paulo’s Japanese immigrant community featuring a sword-wielding protagonist who discovers the reasons she and her beloved grandfather moved to Brazil were not the ones she was raised to believe, this is the type of bloodthirsty thriller I’m frequently partial to.

But director Vicente Amorim’s (Good) latest never comes to life. It moves in fits and starts, only achieving mesmerizing liftoff on rare occasions. The film takes itself much too seriously while also displaying a penchant for flippant silliness at the most inopportune moments. This produces something of a tonal mishmash I didn’t find appealing, and for every great sequence, there were two or three others that had me rolling my eyes in frustration.

Not to say there aren’t some terrific ideas. Not being at all familiar with the source material, I do like how Amorim and his team of screenwriters play coy with so many of the story’s more inspired twists. This search for truth happens incrementally, a core revelation unveiled at the absolute perfect moment and delivered with stylishly effective aplomb.

I also found a rooftop showdown between the heroine and the cadre of assassins sent to eliminate her to be well worth the wait. It’s the only time where I didn’t feel like Amorim and his editor Danilo Lemos didn’t overcut the action into a visual blur. I also loved the way cinematographer Gustavo Hadba shot this battle, his widescreen imagery capturing the cool blue rhythms of a city in constant motion while also never losing focus on the bloody swordplay happening at the center of the frame.

The plot centers on Japanese ex-pat Akemi (MASUMI), a semi-despondent young woman grieving over the recent loss of her grandfather who raised her from a baby. Things take a sudden violent turn when the wounded Shiro (Jonathan Rhys Meyers) unceremoniously arrives in her apartment carrying a sword given the ominous moniker “Muramasa,” otherwise known as a blade fabled to trap the souls of the victims its dispatched into the underworld.

This sets off a chain of events that leads Akemi on a journey of self-discovery. Turns out she’s the only surviving child of a murdered Japanese yakuza boss, and with the Muramasa now in her hand, it is her birthright to retake control of the clan and avenge her family’s death.

There’s plenty more than that going on, not the least of which involves Shiro, an amnesiac who recently escaped from the hospital who has no idea why he has the sword or how he knew to bring it to Akemi. There’s a secret underground Japanese society the young woman’s grandfather was mysteriously a part of, while a feared yakuza enforcer (Tsuyoshi Ohara) may not be the harbinger of doom he initially appears to be.

But while there are sudden bursts of violence throughout, Amorim paces things so sluggishly it ends up being up to the performances to maintain the viewer’s interest. Unfortunately, while MASUMI looks good in action, from a dramatic standpoint she’s something of a non-presence. I don’t know if it’s because of the way she’s been directed, but I never felt any emotional intensity coming from Akemi, just banal wide-eyed bewilderment. It’s as if MASUMI is saving herself for the sequel, but considering how flat so much of this ends up falling, a second chapter ever seeing the light of day seems rather unlikely.

I wish I felt differently. That second half twist is a corker, and I’m undeniably curious about how Amorim might choose to explore the ramifications of that reveal if Akemi’s tale were indeed to continue. But other than a few fleeting moments of greatness, Yakuza Princess never does enough to earn the throne, making this a royal disappointment I’m moderately annoyed that I didn’t enjoy. 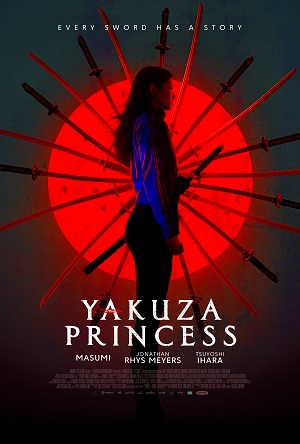