The fact the Fast and Furious franchise has reached its seventh installment, the idea that we’re even still talking about former street racer and family-centric criminal Dominic Toretto (Vin Diesel) and his continuing bromance with former F.B.I. agent Brian O’Conner (Paul Walker), all of it is rather unbelievable. I mean, as has been repeated over and over and over again now, the initial chapters weren’t anything more than glorified B-grade genre pictures with no interest in being anything more, taking few chances and avoiding risk as they followed their low rent templates to their natural conclusions.

All that changed with the arrival of Fast & Furious is 2009. Bringing Diesel and Walker back into the fold together for the first time since the 2001 original, assembling an ethnically diverse cast culled from cast members who had appeared in all three of the previous features, director Justin Lin and writer Chris Morgan reshaped things into some multicultural Ocean’s 11 meets Mission: Impossible wonderland where all things were suddenly possible. They created a Bugs Bunny versus Road Runner milieu that was as silly as it was intoxicating, upping the ante as far as the vehicular fireworks were concerned while also at the same time keeping Toretto and O’Conner at the center of things, the evolution of their friendship the anchor around which everything else revolved around.

The subsequent two adventures, 20011’s Fast Five and 2013’s Fast & Furious 6, only solidified this dynamic, Lin and Morgan manufacturing a relatively odd, thoroughly engrossing trilogy that saw our antiheroes blossom into their own version of the Justice League, going from the wrong side of the law to crusaders for justice called in to do battle with the forces of evil when law enforcement’s hands were tied and all other options weren’t available. Dwayne Johnson and Gal Gadot were added to the mix, while Diesel, Walker and the rest of their gang (including Michelle Rodriguez, Jordana Brewster, Ludacris, Tyrese Gibson and Sung Kang) continued to do what they do best keeping the concept of family and togetherness sacrosanct every step of the way.

Furious 7 changes things up considerably, Walker’s tragic death in a car accident before filming had ended obviously being the biggest item. Additionally, while Morgan remains, Lin has departed (he’s just started production on Star Trek 3), Saw and The Conjuring filmmaker James Wan taking up the directorial reins for this go-around. Thanks to the happenings of the last chapter (as well, in a roundabout way, the events of The Fast and Furious: Tokyo Drift), Gadot and Kang also do not return, their absence a major reason Toretto, O’Conner and their gang spring back into action. 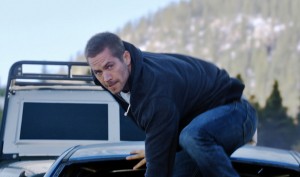 Not that the basic through line is utter simplicity itself. Cribbing a bit from Die Hard with a Vengeance, the group’s peaceful Los Angeles retirement is short-lived when former British assassin Deckard Shaw (Jason Statham) comes calling, vengeance on his mind considering the team was responsible for putting his little brother Owen (Luke Evans) in the hospital on life support. Not able to turn to law enforcement superman Hobbs (Johnson) for help, they instead find themselves being aided by a secretive government agent calling himself Mr. Nobody (Kurt Russell). He’ll give Toretto and O’Conner the tools they need to hunt down Shaw if they and their team assist him in turn, the ghostly spy needing them to rescue a kidnapped hacker named Ramsey (Nathalie Emmanuel) from international arms dealer and terrorist Jakande (Djimon Hounsou).

From there things literally fly in a multitude of directions, Dominic and Brian parachuting cars out of a cargo planes, vaulting them between gigantic Abu Dhabi skyscrapers and launching them off the side of cliffs as if they were boulders. People hang of the side of buses, battle military drones with ambulances and get into a variety of chop-socky fist fights Jackie Chan would stand up and cheer. A variety of newcomers are introduced (including UFC champion Ronda Rousey, Thai martial arts superstar Tony Jaa and Australian rapper Iggy Azalea), while Tokyo Drift principal Lucas Black returns to solidify the connective tissue between part three in the series and all the films that have come after it. The laws of physics are destroyed while characters continue to spout melodramatic platitudes about family and togetherness the series has in its own unapologetic way become celebrated for.

It’s needless convoluted, and it’s impossible to get away from the thought Morgan is using his scenario constructed here to plant the seeds for forthcoming chapters. Pretty much all of the stuff dealing with Jakande, his murderous henchmen and his rather nondescript plans to utilize Ramsey’s cybernetic invention is nothing more than a massive red herring, and as threats go he’s about as limp a one as has been found in a Fast and the Furious film up until now. The volume of destruction also approaches near Man of Steel levels of queasy uncomfortableness, what Toretto and O’Conner end up doing to downtown Los Angeles borderline unconscionable.

I also admit to being uncertain as to where things go next. Not because there aren’t obstacles remaining for Toretto and his team to overcome – there most assuredly are – but more because I don’t know how resonant all of this is going to be without Walker. What Furious 7 clearly shows is that his Brian O’Conner has been this series’ heart and soul long before we probably realized it, his evolution from lawman to antihero to brother to husband to father the one that has given things their emotional kick. While Wan and company send him off into the sunset with gloriously subtle, tearfully authentic sensitivity (he’s more or less “retired,” sent off to live with Brewster in peace), with him no longer part of the ensemble subsequent films are going to have to work overtime to make up for his absence.

Yet Furious 7 in almost all the ways that matter is every bit as entertaining as the three features that have preceded it. The film continues to give all of the actors something to do (the fight between Rodriguez and Rousey, as well as the two between Walker and Jaa, are spectacular), the byplay between members of the ensemble as unforced and as organic as ever. Wan shows himself to be a strong action director, staging scene of mayhem and madness that are as every bit as fantastic and as eye-popping as anything offered up to this point. This seventh chapter is a hoot and while it’s offering up more of the same it’s doing so in spectacular fashion, and in the end I seriously doubt anyone who’s enjoyed the last three will head home afterwards dissatisfied.