Skillfully Made Mockingjay Only Half the Story

She destroyed their Games.

Katniss Everdeen (Jennifer Lawrence) never imagined that by shooting an arrow into the arena sky she would bring about full-scale revolution, but intentional or not that’s exactly what she has done. Transported to District 13, long thought to be destroyed, reunited with her mother (Paula Malcomson), sister Prim (Willow Shields) and best friend Gale (Liam Hemsworth), this gladiator is now safe, even if Panem itself is in a state of unimaginable chaos. 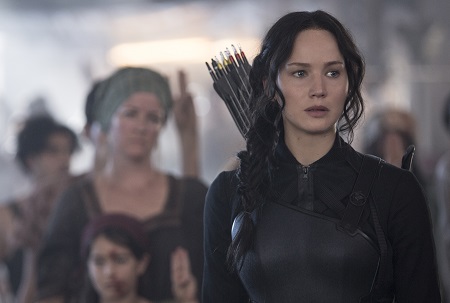 The rebel leaders, under the command of former head gamesmaker Plutarch Heavensbee (Philip Seymour Hoffman) and District 13 President Alma Coin (Julianne Moore), want Katniss’ help. See, she’s become a symbol to all the Districts, a figurehead of defiance to the Capital’s totalitarian authority. They want her to embrace being the Mockingjay, to be their figurehead of revolution, showing Panem President Snow (Donald Sutherland) that the battle is just beginning and it will not end until freedom rings and Democracy can be had for all.

But she destroyed their Games, and Snow is not one to show mercy, and he’ll use the might of the Capital to annihilate every last soul who idolizes Katniss even if that means seeing the entire country awash in a sea of blood.

Thus begins the final chapter of author Suzanne Collins‘ massively successful literary trilogy, The Hunger Games: Mockingjay – Part I, the first half of this climactic adventure showcasing how The Girl on Fire becomes both the spiritual and the literal figurehead of a revolution that will see her homeland forever changed. It shows how Katniss goes from reluctant player in an abhorrent game to a freedom fighter battling against tyrannical injustice, everything once again seen primarily through her eyes as she struggles to comprehend what is going on and what her part in the grand design ultimately might be.

That “first half” comment is the problem, because unlike both the first The Hunger Games as well as the middle chapter in this series The Hunger Games: Catching Fire, the powers that be (i.e. Lionsgate, the studio financing things) have decided to split Mockingjay into two parts. They’ve noticed how well this worked for both the Harry Potter and Twilight franchises and thus are eager to make as much money as they can, not caring that Collins’ source material – admittedly my personal favorite book in the trilogy – doesn’t have enough plot to warrant doing so. What would have made a nice 150-minute, potentially three-hour movie has instead been split into two gargantuan halves, this initial fifty percent barely having enough narrative heft to manage all of its 123 minutes.

Not to say returning director Francis Lawrence and new-to-the-series screenwriters Peter Craig (The Town) and Danny Strong (Game Change) don’t deliver. There is, in fact, plenty to love, a handful of moments that get the blood racing and set the spirit soaring into the stratosphere. Early sequences involving Katniss’ return to a bombed-out District 12 are chilling in their depiction of senseless terror and devastation, while a quiet moment in a peaceful rock quarry next to an eerily serene lake is chilling in its sub-textual poignancy. There’s a wonderful scene inside a battlefield hospital that, while not altogether original or devoid of melodramatic cliché, still puts a lump in the throat all the same, making the indescribable devastation to quickly come all the more affecting in the process.

Additionally, it’s good to see Hemsworth in on the action, the actor finally getting a chance to dig into Gale in ways the stories being told in the first two movies didn’t allow to happen. Hoffman gets in a few choice bits as the wickedly acid-tongued Heavensbee, reminding us all once again just how tragic a loss his passing truly was. Sutherland twirls and whirls his way around his despicable President Snow as devilishly as ever, while much like she did in the last film, once again Elizabeth Banks steals scenes left and right as brought down from her Barbie Doll pedestal former government mouthpiece and District 12 spokeswoman Effie Trinket.

As for the newcomers, only Moore is given the opportunity to explore her character’s interior machinations, planting the seeds for the decisions she will make as the rebellion’s commander-in-chief during the final push towards victory. The rest, including Mahershala Ali as the security chief, Boggs, in charge of the Mockingjay’s personal safety and Natalie Dormer as the public relations dynamo, Cressida, responsible for transforming Katniss into a revolutionary propaganda figurehead, aren’t given near as much to do, and as such they’re not memorable one way or the other by the time things come to an end. 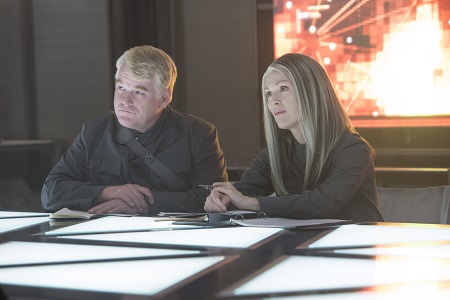 Said end is actually the biggest problem as Mockingjay – Part I doesn’t actually have one. No real surprise there, of course, but the blatant cliffhanger keeping a major character in the throes of government engineered insanity and Katniss at a loss as to how to react is still awfully annoying. Unlike Catching Fire, which also ended in a state of uncertainty, there’s no sense of closure, no feeling the central plot strands utilized for this portion of the climactic chapter have come to any sort of satisfying resolution. It all just sort of stops, period, end of sentence, director Lawrence doing what he can to add some sort of emotional crescendo to the film, even if this section of the story doesn’t actually have one.

Don’t misunderstand. The Hunger Games: Mockingjay – Part I is still skillfully made and Jennifer Lawrence is as good as ever as the young woman who must transform herself into a hero whether she wants to or not. Unlike the first two, though, this one feels far more engineered by a corporate committee than either of its predecessors did, diluting the emotional impact of all that’s transpiring for Katniss and her followers in the process. While the girl most definitely remains on fire, the temperature keeping her ablaze is notably starting to fall. Here’s hoping next November’s final chapter remedies this and gets those flames soaring to their proper height once again.