The premise of director Sam Mendes’ (Skyfall, American Beauty) spellbinding WWI drama 1917 couldn’t be simpler. Under orders from General Erinmore (Colin Firth), Lance Corporal Blake (Dean-Charles Chapman) is tasked with making a perilous trip through the German lines in order to deliver a message to Colonel MacKenzie (Benedict Cumberbatch) canceling a morning attack. If he fails, 1,600 men, including his brother, will likely die. Armed with his wits, a map, the message, his rifle and few additional odds and ends, and joined by his friend (and not-so-enthusiastic fellow “volunteer”) Lance Corporal Schofield (George MacKay), Blake sets out immediately, the fate of all those fellow soldiers uncomfortably resting upon his jittery shoulders.

That’s it. That’s the plot. No deep descent into the personal lives of a platoon of soldiers. No examination of the historical complexities of the war. Instead, this is a visceral bird’s-eye view of what it may have been like to be sitting in a muddy trench, especially the terror that must have flowed through their veins when ordered to step foot into the pulverized, godforsaken territory between each opposing force’s frontlines known as “No Man’s Land.” That’s honestly as far as the story goes.

I’m leery of saying too much more because, as rudimentary as this plot might sound, Mendes and his co-writer Krysty Wilson-Cairns still have a small handful of surprises hidden up their sleeves. Likely surprising no one, Lance Corporals Blake and Schofield encounter several lethal obstacles on their trek to deliver General Erinmore’s message, and whether or not both men will finish their quest is a heartbreaking open question. It’s a harrowing journey overflowing in mud, blood, tripwires, collapsing underground tunnels, crashing fighter planes, snipers and a number of additional roadblocks that pop up like random flashes of gunfire from an undisclosed location. I couldn’t take my eyes off of the screen, and for almost two hours I sat in the theatre curious to discover what Mendes was going to choose to show me next.

From a purely technical standpoint this film is utter perfection. Shot and edited as if to appear to be one continuous shot, this way of leading the viewer through these events is more than just a cute trick crafted by a talented director trying to show off. For me, this style fully immersed me into this world. I felt like I was the a third, at times ethereal observational member of the team sent out on this mission. Roger Deakins’ (Blade Runner 2049) cinematography, Lee Smith’s (Dunkirk) editing, Thomas Newman’s (Bridge of Spies) score and Dennis Gassner’s (Into the Woods) production design all combine with glorious precision, the look, feel and most of all sound of the environments stunningly realized to a jaw-dropping degree.

Both Chapman and MacKay are superb, the latter arguably Oscar-worthy even when considering the crowded field of likely Best Actor candidates already competing for one of those five precious nominee slots. I also feel like Mendes’ handling of the material is the best of his lauded career, and while I’ve been up and down on the director over the past couple decades I’m still nothing less than flabbergasted by what he has accomplished here. This motion picture flies by in the proverbial blink of an eye, its gut-wrenching spectacle intermixing with the inherent emotional humanity at its core with striking authoritative resolve. 1917 is magnificent, and as someone who has seen it twice I can’t wait to sit down and watch it again for a third time as soon as the opportunity to do so arises. 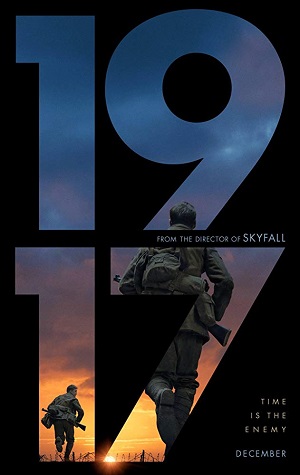