Pilot Adam Reed (Ryan Reynolds) has traveled from the year 2050 to right a grievous wrong. But his ship is damaged and he is shot during the unauthorized trip, and instead of arriving in 2018 as planned, he ends up in the middle of nowhere in a lushly forested 2022.

Or maybe he landed exactly where he was meant to? Intentionally or not, he’s come to the childhood home of his 12-year-old self. Young Adam (Walker Scobell) lives alone with his single mother Ellie (Jennifer Garner), the pair still grieving the tragic loss of the boy’s scientist father Louis (Mark Ruffalo) a year prior, even if neither will admit it.

This is the setup to director Shawn Levy’s The Adam Project, his latest collaboration with his Free Guy star Reynolds — and this star-studded bit of sci-fi silliness is even more entertaining than that 2021 box office hit was. Reminiscent of ’80s favorites like Flight of the Navigator, The Last Starfighter, or *batteries not included, this heartwarming adventure is a lot of fun. It also has an underlying emotional complexity I didn’t anticipate, making it far more memorable and endearing than it has any right to be.

The hook is that both Adams join forces to go back to 2018 to see their dad and convince him not only that he invents time travel, but that his wealthy tech-billionaire business partner Maya Sorian (Catherine Keener) will utilize this power recklessly when she gains control of his discovery after his untimely — and mysterious — death. This forces Louis into an ethical quandary: the logic-driven scientist has to decide whether to listen to two versions of his son from the future, or instead turn them away to keep from risking doing greater damage to the universe by changing set timelines without knowing how they’ll affect events still to come.

With four credited writers, there is a “scripted by committee” feel to some of what happens, mostly in how the narrative treats Sorian. There is an attempt during the 2018 section to show how the character began as a selfless do-gooder who legitimately wants Louis’ invention to be a boon to humanity. But something transforms her into a murderous despot thirsting for power, and while Keener does a solid job differentiating between the two versions of her character, the mechanics of this descent into full-blown evil never rings true.

What does work is the interplay between Reynolds and Scobell. The two have incredible chemistry, and I got a big kick out of their rapid-fire banter. Scobell is especially terrific. The youngster has to not only be a pint-sized version of Reynolds but also emotionally navigate a path well outside of the one his older self insists is the only one available to him. It’s a tricky part, and the newcomer doesn’t just play it well, at times he’s downright spectacular.

There’s an engaging, albeit brief, supporting turn from Zoe Saldaña as a character I choose not to speak more about, and a quick 13 Going on 30 reunion between Garner and Ruffalo right around the two-thirds mark is well worth the wait. The visual effects are excellent, composer Rob Simonsen (Ghostbusters: Afterlife) provides a suitably exuberant score, and cinematographer Tobias Schliessler (Beauty and the Beast) gives the picture a magnetic visual aesthetic I was continually drawn to.

It all slightly runs out of steam near the end, but thankfully Levy and his screenwriters stay true to their characters and the foundations of the mythology they’ve concocted. Instead of taking the easy way out, the aftereffects of tragedy and loss are allowed to linger in ways atypical for genre fare like this, granting the film an extra layer of empathetic hopefulness that’s lovely.

I enjoyed The Adam Project. Its past, present, and future permutations an exciting joyride fit for the whole family. 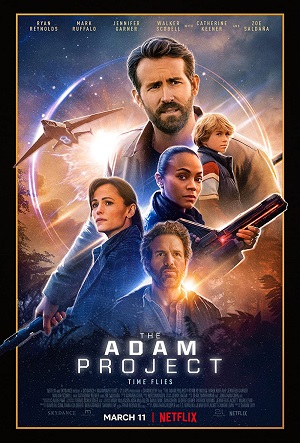