Much Like Star Wars: The Rise of Skywalker, Jason Reitman’s Ghostbusters: Afterlife does feel like a studio-mandated change of direction to appease a vocal minority of cantankerously whiny man-babies who felt that a previous installment in one of their favorite franchises dared to ruin their collective childhoods. Unlike that disastrous last chapter in the Skywalker saga, this one is made with just enough love, care and attention to detail that it still manages to entertain for most of its running time.

This does not mean I approve of everything Reitman and his co-writer Gil Kenan (Monster House) have done here. A direct sequel to 1989’s Ghostbusters II, much of this still comes across like a semi-cynical nostalgia play. The pair borrow liberally from the original 1984 hit, so much so I’m honestly surprised Dan Aykroyd and the late Harold Ramis don’t get full screenwriting credit and not just a “based on” card. Almost every scene has some sort of callback or clever Easter egg, while the main villain and their mystical canine cohorts won’t surprise anyone even passingly familiar with the first film.

Still, Reitman gamely steps into his father Ivan Reitman’s shoes and does his best to take the franchise in an amusing direction. While a long way from Tully, Juno or Young Adult, the filmmaker shows a flair for big-budget tentpole theatrics. Better, he still knows how to ground his characters in the real world, making them far more intriguing than I anticipated. Reitman and Kenan mature the purposefully silly mythology dreamt up by Aykroyd and Ramis almost four decades ago considerably, giving this new story noticeable emotional heft. And while ghosts do get busted, some tears get shed along the way as well.

After being evicted from her New York apartment and in the same breath learning of the death of her estranged father, single mother Callie (Carrie Coon) uproots her children Trevor (Finn Wolfhard) and Phoebe (Mckenna Grace) and moves them all to Summerville, Oklahoma. Her dad left them his dilapidated farmhouse smackdab in the middle of nowhere, and with few other options available, taking up residence there seems like a good idea.

Callie’s dad was no eccentric dirt farmer, though. He was Egon Spengler, a bona fide Ghostbuster, and he had moved to Summerville for a reason, a mystery that scientific prodigy Phoebe is on the verge of figuring out. With the help of new friend Podcast (Logan Kim), laidback summer school teacher and erstwhile seismologist Mr. Grooberson (Paul Rudd), her brother Trevor and the town sheriff’s daughter Lucky (Celeste O’Connor), she’s going to fit the pieces of this apocalyptic supernatural puzzle together no matter what the consequences.

Even with all the allusions to the previous films, the first half of this sequel is quite wonderful. Grace is outstanding, and Wolfhard, O’Connor and Kim all lend solid support. Coon also has several strong moments, and while I do wish Reitman and Kenan’s script made better use of her character, the actress still makes a memorably lasting impression.

As amusing as all of this is, I equally felt like the director sometimes forgot he was making a comedy. Taking things into Stranger Things–meets–The Goonies territory, Reitman eschews the anything-goes, improvisation-rich aesthetic Bill Murray, Ernie Hudson, Aykroyd, and Ramis brought to their ghostbusting endeavors. This means that the silly stuff, especially when it’s of the more risqué variety, tends to fall flat. This is particularly egregious during the climactic third act, when past and future collide, the worlds of Ghostbusters and Ghostbusters: Afterlife uncomfortably intermingling in a manner I found disappointingly forced.

Reitman’s affinity for the property does ring true, however, and I’d be lying if I didn’t admit to breaking out in a wide grin on multiple occasions: when Phoebe engaged in a polite game of chess with an otherworldly visitor; when Trevor took a repaired Ecto-1 out to an empty cornfield for an energetic spin; when brother and sister, with an eager assist from Podcast, chased down a metal-eating Muncher through the streets of Summerville; and when Mr. Grooberson went all goofily weak in the knees at the sight of a working Ghostbusters’ trap.

I wish the villain wasn’t a retread. The final-act reveals do not work very well. A spectral resurrection, while tastefully handled, is still awkwardly ghoulish. But Grace is a revelation, and the emotions at the heart of this tale are touchingly genuine. Ghostbusters: Afterlife makes more good calls than bad, and for some viewers, when there’s something strange going on in the neighborhood, giving this legacy sequel a look might be the way to go. 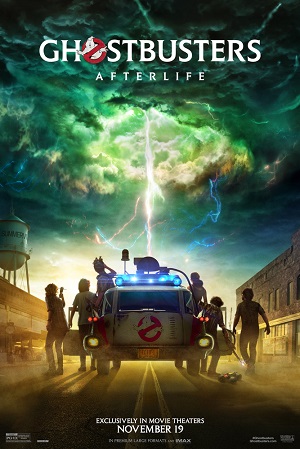