Recently widowed Jessica (Jules Willcox) has packed up her belongings and fled the city for the open road, her final destination not nearly as important as the fact she’s attempting to leave her past in the rearview mirror. In the middle of the secluded nowhere the grieving young woman encounters a fellow traveler, a creepily friendly bespectacled older man (Marc Menchaca) who for some reason keeps crossing her path.

Before Jessica even knows what is happening, her car mysteriously blows a tire causing it to crash on the side of a mountain road. Waking up hours later, she’s trapped in an underground room, this same grinning man staring her straight in the eye. They’re somewhere in the middle of the forest, and according to him she’s his now. There is no escape. No one will find her, and as far as her soft-spoken captor is concerned, these are facts Jessica should just accept if she has any desire whatsoever to keep on living.

Alone is a supremely entertaining wilderness survival thriller that makes up in tension, excitement and visceral chills what it lacks anything akin to a surprise. While I always had a pretty solid feeling that I knew exactly where Mattias Olsson’s efficient screenplay was heading (the writer adapting his own script for the Swedish drama Försvunnen), it’s all so gripping I could have cared less. Director John Hyams (Universal Soldier: Regeneration) handles all of the outdoor action with supreme confidence, delivering the suspenseful goods with consummate skill.

I liked how stripped-down all of this is. We learn about Jessica’s past in bits and pieces, her backstory revealed in ways that only help make her current plight all the more terrifying. Hymas keeps things based in a pool of emotional authenticity that’s wholly compelling. At the same time, he refuses to allow the film to drown in it. He leaves it up to Willcox to believably anchor events with her captivatingly complex performance, Jessica forced to decide whether she’ll let her grief and her fear consume her or if instead she’s willing to dig deep and do whatever it takes to survive.

Menchaca is an effective villain, oozing a quiet cold-blooded menace that’s unsettling. Veteran character actor Anthony Heald pops up in a key supporting role, and there are a variety of vocal performances heard on various cellphones sprinkled throughout that are far more vital to the proceedings than one might initially assume. Composer Nima Fakhrara (Survive the Night) provides a subtly strong score, while cinematographer Federico Verardi does a sublime job of bringing the tale’s isolated forest locations to vividly colorful life.

I’d have loved to have seen this one in a theatre. It just begs to be viewed on a giant screen. Even so, Hyams’ latest is still an electrifying character-driven barnburner that kept me on the edge of my seat for almost all of its briskly paced 98 minutes. Alone is crackerjack white-knuckle entertainment, and personally I cannot wait to see it again. 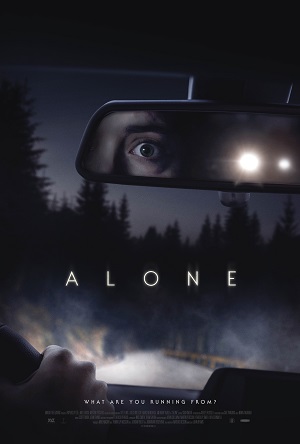