But the film is also disastrously unfocused and overtly sensationalistic in ways that made me feel physically ill. It revels in any number of slavery melodrama cliches and revels in scenes of violence and degradation devoid of context, purpose or greater meaning. The majority of the characters are one-dimensional, some of the more vile and most despicable of them so cartoonishly outlandish their irredeemable evil never registers as believable. Because of that, tension is significantly reduced and all that’s left is an omnipresent sensation of profound cruelty that’s borderline irredeemable.

Not wanting to spoil anything, what I will say about the plot is that the Bush and Renz have more or less split things into two distinct halves before merging both of their scenarios into one not-so-ingenious whole during the climactic act. The first section follows Virginia slave Eden (Monáe) as she tries to survive on a brutal plantation run by Confederate Army soldier Captain Jasper (Jack Huston). The second is set in the present day and concerns author Veronica Henley (also Monáe) who is out on a book tour and encounters creepily friendly southern belle Elizabeth (Jena Malone) who makes her instantly uncomfortable.

It’s difficult not to think about all of this as some sort of “Twilight Zone” scenario padded out to feature length, and it’s clear that Bush and Renz have a whole lot they want to say about race, gender, politics, identity and a myriad of additional hot button issues. But it’s all so messy and exploitive, and while the in-your-face style is likely intentional, that does not make it enjoyable or edifying in ways that could erase the bad taste this tale left in my mouth like it was a rotten egg purposefully shoved down my mouth by a well-intentioned bully.

That does not mean I could tear my eyes away from the action for a single solitary second. As already stated, Monáe is superb. She throws her heart and soul into her performance. I could feel every drop of blood and I could smell every salty tear, while her terrified sweat was so palpable I almost felt like I could see its residue seeping through the screen. Monáe gives herself over to the material completely, the emotional depths she descends to nothing less than extraordinary.

Those first 35 minutes are pretty rough. I get why the filmmakers feel the need to focus so intently on slavery’s dehumanizing abhorrent ugliness, and that’s exactly how it should be. But the pair is so concerned with concealing the tricks and twists that happen during the last third of the story that it makes everything that happens before that point, most notably during this opening act, come across as superficial and exploitive. It feels like pain, suffering, violence and degradation all for the sake of pain, suffering, violence and degradation, and while that almost certainly isn’t the intent that’s still how it came across to me nonetheless.

I don’t know. I’m sure some will be impressed with what Bush and Renz have come up with. At the very least, Monáe’s magnificence alone might be enough for a significant number of viewers to give this trippily ambitious thriller thumbs up no matter what its other various faults might be. But I can’t do that. Antebellum is noticeably striking in several ways, but it’s also sickening and disheartening in so many more. It didn’t work for me, and ultimately the only thing I found shocking about this one was just how insultingly trivial I found it all to be. 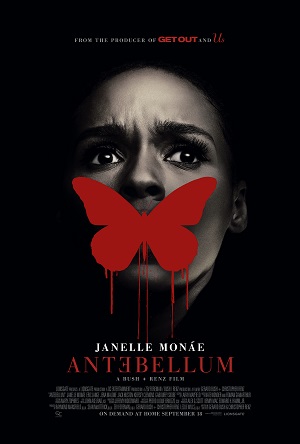