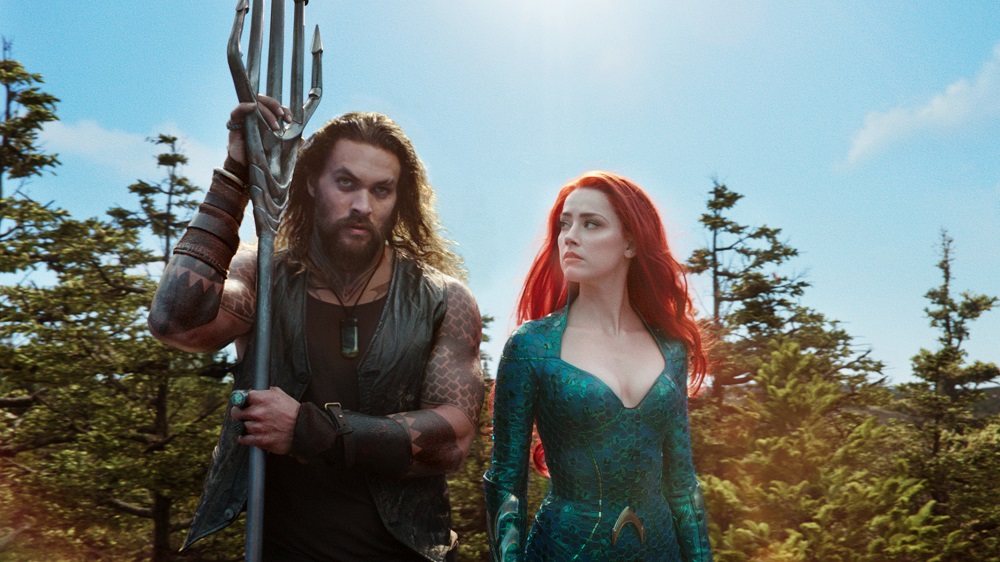 After his success battling Steppenwolf alongside fellow members of the Justice League, half-human, half- Atlantean Arthur Curry (Jason Momoa), known in the press as “Aquaman,” has begun embracing his status as a hero. Most recently he saved a Russian submarine crew after their vessel was taken over by murderous pirate David Kane (Yahya Abdul-Mateen II) and his loving, if equally lethal, father Jesse (Michael Beach), ultimately making the decision to leave the pair to fend for themselves as the sub slowly sank to the bottom of the Atlantic Ocean. 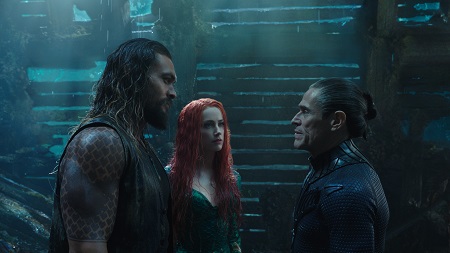 Afterward Arthur retreats back to his lighthouse keeper dad Tom’s (Temuera Morrison) favorite New England bar to toss back a few cold ones only to have their family reunion crashed by Atlantean royalty in the shape of the fiery red-haired Princess Mera (Amber Heard). She warns him that his half-brother King Orm (Patrick Wilson) is about to declare war on the surface unless his crown is usurped by his older sibling. But Arthur isn’t so certain that’s a great idea, and even after talking to his childhood teacher Vulko (Willem Dafoe) and learning of his mother Queen Atlanna’s (Nicole Kidman) apparent murder because she had the temerity to love his father the powerful metahuman still isn’t convinced he’s the one to rule Atlantis. Once he meets Orm, however, and realizes the full genocidal extent of his plans Arthur understands he has no choice but to spring into action, and with Mera’s help he’ll attempt to become the type of leader and hero citizens both above and below the ocean’s surface would be proud to support.

That’s only a small snippet of what’s going on in James Wan’s (The Conjuring, Saw) bizarre, free-wheeling take on the popular DC Comics superhero Aquaman created by Mort Weisinger and Paul Norris. His movie is exuberantly insane, playfully going for broke as it showcases an eye-popping undersea world unlike anything in a live action motion picture that I’ve ever seen. It’s like Blade Runner, Flash Gordon, Avatar, Raiders of the Lost Ark, Finding Nemo, TRON, The Lord of the Rings, 20,000 Leagues Under the Sea, The Untouchables, “Johnny Quest,” the Brendan Fraser version of The Mummy, Gladiator, Ben-Hur, the Christopher Reeve Superman and a Star Wars prequel all threw their DNA into a blender and this is what they ended up with. Narrative similarities to Marvel’s Black Panther notwithstanding (technologically advanced civilization hidden from the rest humanity, two half-brothers battling for the crown sharing mommy and daddy issues, an intelligent woman offering up more than her fair share of able-bodied support), Wan’s descent into comic book fantasia is close to incredible, even its frequent missteps overflowing in an infectious giddy fervor that’s close to wonderful.

All of that means there’s understandably a great deal to process, and the frequently shifting tone can be jarring. But Wan’s control over all that happens is iron-clad, and it’s somewhat amazing he’s able to pull all of this off with such entertaining aplomb. The Russian submarine prologue is suitably stripped-down, the director showcasing Arthur’s various abilities with a relaxed ease that rarely calls undue attention to itself. He also isn’t afraid to show how his decision to leave the two pirates to escape from the drowning ship on their own effects hero and villain alike. This moment will change Arthur and David forever, and the complexity of this aftermath is one of the more intriguing emotional elements lurking at the center of the film.

Not that the movie ever spends all that much time dwelling on just about any of the various narrative and dramatic complexities that arise over the course of its 143-minute running time. Wan keeps things moving so fast that one moment he has us watching an underwater meeting of rulers where Wilson’s King Orm, sitting astride a gigantic armored shark-crocodile-dinosaur thing, converses with Dolph Lundgren’s King Nereus who’s riding giant militaristic seahorse only in the next second to showcase Arthur and Tom trying to outrun a massive tidal wave with Mera arriving out of nowhere to lend a helping hand when their truck is overturned in the chaos. From there we’re whisked off to Atlantis, enjoy a gladiatorial battle between half-brothers above a primordial sea of lava, head into the African deserts in search of a long-lost trident, travel to the Grecian coast in order to experience the return of David Kane after he’s taken on the mantle of the destructive Black Manta, end up at the bottom of a mysterious trench overrun with carnivorous flesh-eating sea creatures, step into a lost world where myth and legend collide all before returning back to the outskirts of Atlantean civilization to see if our hero can stop a war while sitting atop an ancient titan that’s been waiting for a worthy leader to arise and ask it for its assistance. As I said, it’s a lot to take in, and if a viewer were to find themselves lost while trying to make sense of it all I wouldn’t exactly be surprised. 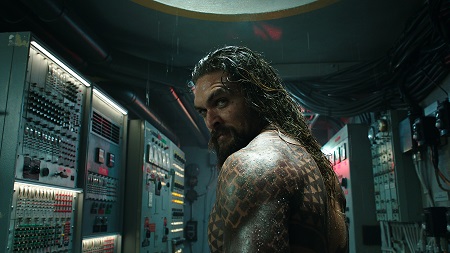 Does it all work? Heck no. Is it nonetheless consistently enjoyable? Yes with a capital Y a capital E and a capital S, all three letters followed by a bevy of exclamation points. Wan’s visual imagination is boundless, and his delight showcasing all of these different locations, civilizations, creatures and people is undeniable. He allows Momoa to give a suitably larger-than-life performance that befits the character and the universe he lives within perfectly while at the same gifting Heard with one of the best characters of her career. The filmmaker also gives Wilson, Lundgren, Kidman and especially Dafoe a handful of key moments to strut their respective stuff, each actor having at least one signature scene where they get to make the most of their screen time. I was also overjoyed with composer Rupert Gregson-Williams’ (Wonder Woman) wildly idiosyncratic score, the music changing style and temperament nearly as frequently as the narrative does.

Look, it isn’t all fun and games, and there were certainly instances where I wondered what had to have been going through Wan’s head as he stood there on the set setting up his next shot with veteran cinematographer Don Burgess (Forrest Gump). I was also a little disappointed that the Black Manta/David Kane storyline wasn’t as fully developed or as emotionally realized as I hoped it was going to be, and while Abdul-Mateen gives a strong performance the lackluster screenwriting as it pertains to his entire subplot doesn’t do him any favors.

Even with that being the case I had a terrific time sitting in the theatre watching the movie play itself out to conclusion. Wan does a great job of handling things, and if it wasn’t clear from Justice League that Momoa is the only choice to be portraying Arthur Curry it most certainly is now after watching this. Aquaman is an unhinged undersea thrill ride I enjoyed immensely, and the next time this hero picks up his trident I’ll eagerly take that leap into the cinematic ocean in order to see just what injustice he intends to remedy wielding it. 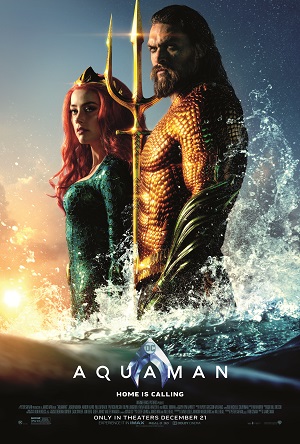